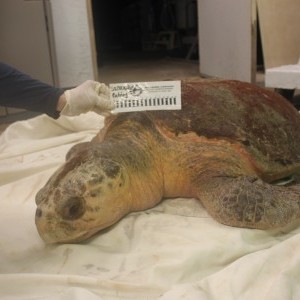 07/31/2021  Turtle was found struggling in the surface near Manatee Public Beach.  Was transported by volunteers to Mote for rehabilitation.  Physical exam shows that "Bobby" is in good body condition, but is exhibiting neurologic symptoms typical of Red Tide toxicity.  Animal was weighed, had blood drawn, and was given subcutaneous fluids.  He is dry-docked overnight due to neurologic issues and not wanting him to accidentally drown.

08/02/2021  Turtle's neurologic symptoms are much improved and he is now in a rehab. pool in very shallow water.  He will be given subcutaneous fluids once daily until he is eating.

08/11/2021  Because he is eating, Bobby was switched from an injectable antibioptic to an oral antibiotic hidden in his squid.

08/13/2021  Bobby is much more active and is swimming normally.  His rehab. pool is now at full depth.  He continues to eat squid well but is not interested in other prey items.

08/27/2021  Bobby's blood work is improving and antibiotics were discontinued.  He continues to eat well, but has a preference for squid.

09/15/2021 Bobby was transported and released at Bonita Beach by Mote staff and interns!  Prior to release, Bobby was outfitted with a satellite tag.  Check for updates on Bobby's whereabouts on Mote's website using the following link... http://mote.org/seaturtletracking

10/25/2021  Turtle re-stranded on Anna Maria Island.  He is once again exhibiting signs of red tide toxicity.  He was given subcutaneous fluids and is in a rehab. pool in shallow water.  He ate a squid and a capelin when offered.

11/04/2021  Bobby is more active and neurologic issues consistent with red tide toxicity have improved.  He is eating well and seems to prefer squid.

11/10/2021  Bobby's neurologic issues have improved.  he is eating well and swimming normally.  Bobby was once again transported and released at Bonita Beach by Mote staff and interns! 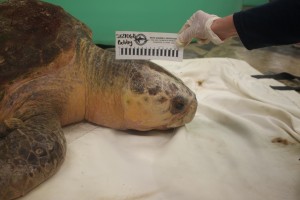 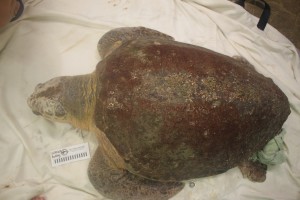