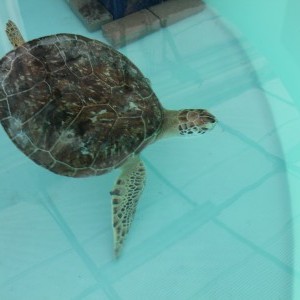 3/20/14 Captain was transferred from the Georgia Sea Turtle Center so her diving capability could be tested. This animal was previously released and re-stranded. Captain is doing very well in deep water and can rest on the bottom.

3/25/15 Captain is doing very well, although buoyancy issues have not subsided. Turtle is kept in lower water to maintain stability. Likely will be deemed un-releasable.

8/03/2015  Weights were added to Captain's carapace.  Tank water level was raised, and turtle is now able to rest on the bottom.

8/28/2015  All weights were removed from carapace and water level was lowered slightly.

12/07/2015  New weights were attached to Captain's carapace to help with buoyancy issues.

12/28/2015  Both weights have fallen off Captain's carapace.  Turtle is seen sometimes flat and sometimes buoyant.

1/15/2016  More weights were added to her carapace, and water level has been raised.  She is observed swimming and resting level.

4/7/2016    Captain was moved to one of Mote's sea turtle exhibit tanks until a permanent facility has space for her. She shares a tank with Bellatrix (there is a permanent divider separating the two).  She is eating well and seems to enjoy all the attention and change of scenery.

1/4/2017  Captain was transferred to her permanent home at the Carpenter House Marine Environmental Education Center in Hollywood, FL.  See the following link for details...http://www.heraldtribune.com/news/20170104/beloved-mote-marine-sea-turtle-gets-new-broward-county-home 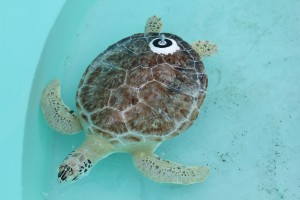 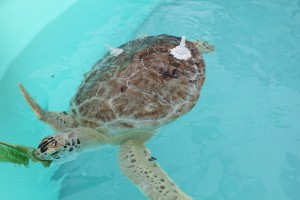 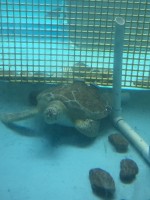 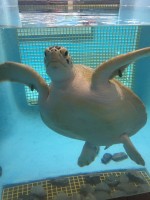