10/25: Dante remains in very guarded and critical condition today. Tests have shown that he has a severe case of pneumonia and is also suffering from gastric problems. The whale also has a fractured jaw that appears to be from an older injury that has begun to heal. Dante has eaten small amounts of fish offered by staff. Mote staff and volunteers continue to monitor him around the clock, watching his condition closely for any signs of distress.

10/28 After getting Dante on the road to recovery, he was transferred to SeaWorld Orlando for long-term treatment. 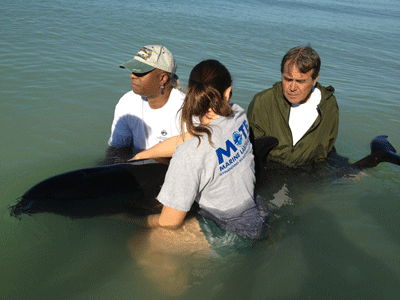 (From left to right) Mote Volunteer David Carnes, Emma Jugovich of Mote's Stranding Investigations Program, and Ralph Valanzuolo, who found the stranded whale on Manasota Key. Photo by Beth Silverstein of Sarasota. Silverstein and her husband, Herb, also helped with the stranded animal.

When Mote’s Stranding Investigations Program staff members got a call Sunday (Oct. 23, 2011) morning about a stranded marine mammal on Manasota Key, they quickly mobilized a response team and headed south.

At the beach, they found three people helping a beached melon-headed whale. After assessing the animal’s condition and conferring with the federal agency that oversees the care and protection of wild marine mammals, the team brought the animal to Mote’s Dolphin and Whale Hospital.

Today (Monday, Oct. 24, 2011), the melon-headed whale, nicknamed Dante, remains in critical condition at Mote, where veterinary staff and a dedicated team of volunteers are monitoring its condition closely. 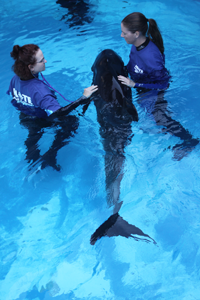 But Mote’s Dolphin and Whale Hospital is itself in need of support if it is to continue serving as a critical first responder and to be the trauma center called when sick marine mammals need help.

The Hospital is currently facing a funding deficit and is in critical need of donations to help support the care of this whale and to continue to be available to treat others when the calls come in.

Ralph Valanzuolo, a visitor from Connecticut, and Herb and Beth Silverstein of Sarasota, were the first on the scene when the melon-headed whale stranded on Manasota Key.

“We were walking along the beach and saw this guy — Ralph — in the water waving,” says Beth Silverstein. “Then we saw the whale he was with. We were the only people on the beach for miles. Luckily, my husband Herb had his cell phone and we could call for help. We’re so glad Mote was there to respond.”

“We estimate that it costs about $4,500 to care for each critical care marine mammal brought to the hospital — that’s per day,” says Glenda Wright, vice president for development at Mote. “That cost is on top of the funds we need to raise annually just to keep the hospital open and to serve non-critical marine mammal and sea turtle patients. We really are in danger of not being able to treat any more critical care dolphins and whales.”

Mote has been treating sick marine mammals at its Sarasota-based hospital since 1992.

Species: Melon-headed whale, Peponocephala electra
Sex: Male
Length: 6.5 feet
Nickname: Dante
Where found: Melon-headed whales are typically found in deep, warm tropical waters. The U.S. has three recognizable stocks: Hawaii, the northern Gulf of Mexico and the western North Atlantic.
Population: Estimated to be about 3,450 in the Gulf. According to the National Oceanic and Atmospheric Administration, there is not enough information about this species to determine whether that is trending up or down or staying the same.

Mote provides critical care for these animals — which are protected under federal law —with the goal of returning them to the wild. Our goal is to provide the most humane treatment possible for live-stranded dolphins and whales, while also creating a better scientific understanding of these animals and their needs to support conservation of these species in the wild.

“So many Southwest Florida residents tell me that one of the most important things they see Mote do is taking care of sick and injured dolphins and whales,” Wright says. “But if people want us to continue to be able to take care of these animals, we really need the community’s financial support to do it.” 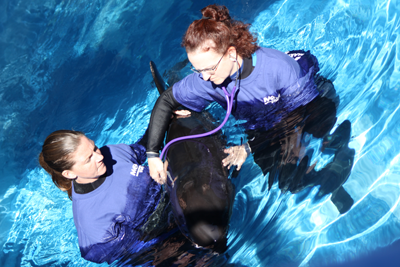