6/6 Dolphin was reported stranded by members of Mote's Sea Turtle Patrol on Longboat Key. Members of the Sarasota Dolphin Research Program responded to the stranding and transported the dolphin to Mote's Dolphin and Whale Hospital. Blood was drawn and sent for testing. Animal was given Pedialyte for dehydration and supported by staff and volunteers. Dolphin is a young female and is underweight. Xenobalanus barnacles, a species of soft-bodied barnacle found offshore, were clinging to the animal's dorsal when she stranded, possibly indicating ill health for a period of time. Dolphin has been nicknamed Edna.

6/7 The dolphin had a rough night and remains in critical condition, with staff and animal hospital volunteers supporting her in the medical pool.

6/11 Edna continues to be cared for around-the-clock by trained volunteers and Mote staff who are keeping a close eye on her condition. She is swimming for short periods by herself and staff is working to encourage her to swim by herself for longer periods of time. On Sunday, Edna ate herring that was offered and she ate on her own again during feeds at 10:30 a.m. and 2:30 p.m. today. She remains in critical condition and is being given medication to treat a variety of illnesses.

6/12 Staff and volunteers continue to monitor Edna around the clock. Her swimming behavior has not improved and she continues to occasionally list to one side. However, she is eating all food that is offered. We continue to treat her for a variety of ailments.

6/13 Edna remains in critical condition with little improvement in her swimming. She is eating about eight pounds of herring and capelin daily and being treated with antibiotics for severe pneumonia and gastritis, among other problems.

6/14 Edna is in critical condition but seems to be improving. She is mostly swimming on her own and swimming in a more upright position than she had previously been doing. We're also starting to toss the fish into the medical pool rather than hand feeding. This is an important step. Because our goal is to return Edna to the wild, we do not want her to begin associating humans with food so the more "hands off" we can be in her care, the better it will be for her in the long run.

6/15 Edna was weighed this morning and has gained a little bit of weight, which is a good sign. She is also interacting more with her environmental enrichment devices (EEDs), which we might otherwise call "toys." EEDs are designed to help keep animals mentally and physically stimulated. Edna is still considered to be in critical condition.

6/27 Edna is eating all that is offered to her and is gaining some weight. Her pneumonia is improving and so are her swimming skills. She remains on antibiotics and we are performing blood tests twice a week to monitor her progress. Mote’s Veterinarian, Dr. Andy Stamper, will be here on Friday to evaluate her progress. Edna remains in critical condition, but we are hopeful that with the progress she’s shown so far, she will continue to make a full recovery — but it’s important to note that we’re only on day 21, so things could change at any time. Our group of specially trained volunteers continue to help Mote staff monitor Edna’s condition around the clock — including taking on midnight and 4 a.m. shifts — and their efforts are greatly appreciated!

7/6 It's been exactly one month since Edna arrived at Mote's Dolphin and Whale Hospital.  Since then she's been making good progress.   "Edna seems to be on an upswing," reports Lynne Byrd, Medical Care and Rehabilitation Coordinator at Mote. "Of course, things can change in a blink when you're treating marine wildlife, but right now she’s definitely continuing to improve."   Edna's weight is about 193 pounds today. When she arrived on June 6, she was about 171 pounds.  Mote caregivers are increasing the amount of food we're feeding in order to support a healthy weight gain and Edna is still responding well to treatment for pneumonia and other medical conditions.   The dolphin remains in critical condition but we are hopeful that she will be a candidate for release to the wild. We are awaiting results on some recent medical tests, and Edna is expected to have a hearing test within the next two weeks. Mote normally gives our dolphin patients a hearing test in the interest of successfully returning them to the wild. Hearing is important to wild dolphins because they use echolocation to orient and feed, and they use sounds to communicate. 7/27 Mote staff and volunteers continue to monitor Edna's condition around the clock. We were hoping to release the dolphin in the next couple of weeks, but after consulting with the National Marine Fisheries Service, which oversees the care and protection for wild marine mammals, we have decided to continue to watch Edna's condition closely to make sure she is ready for release. Blood test results are being monitored very carefully for any possible signs of additional infection. We are also starting to work with the dolphin so that she can be as comfortable as possible during the release. According to Animal Care Coordinator Lynne Byrd, we will be working to make sure Edna is comfortable in the sling that she will be moved in and during the boat trip out to the release site. It's a careful proposition because we also need to do as little hands-on work with her as possible. "She's a wild animal that will be returning to the ocean," Byrd says. "We want to do as little interacting with her as possible so she won't be tempted to approach humans when she's back in the Gulf of Mexico. But we also want the move to be as stress-free as possible."

8-14 Hooray! Edna was released today from a boat located about two miles offshore of Sarasota County.

Mote Marine Laboratory and Aquarium is treating a bottlenose dolphin that stranded Wednesday afternoon on Longboat Key in Sarasota County. While the dolphin has survived its first 24 hours in the hospital, it remains in critical condition.

The dolphin was found on the beach by volunteers with Mote’s Sea Turtle Patrol, who were checking on reports of turtle nests being affected by high tides and stormy weather that afternoon. As the patrollers were checking the nests at about 3:30 p.m., they came upon the dolphin stranded on the beach and played a critical role in helping to stabilize the animal and alerting Mote staff members about the event. 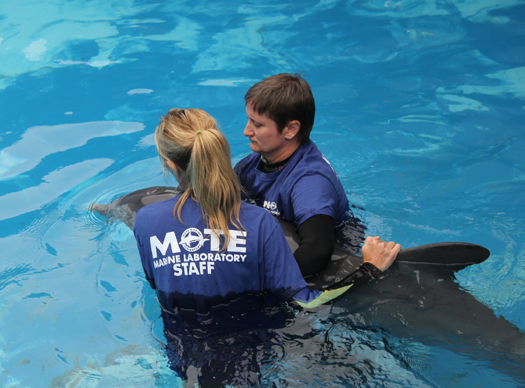 A team from the Sarasota Dolphin Research Program was dispatched and brought the animal to Mote's Dolphin and Whale Hospital where it remains today in critical condition. The dolphin is a female estimated to be about 3 years old. At about 6.5 feet long and weighing about 171 pounds, she appears to be underweight. The dolphin has been nicknamed "Edna."

She is being treated for severe pneumonia and Mote staff and specially trained volunteers are with the dolphin around the clock. Caregivers are supporting Edna in the water and allowing her to swim on her own for short periods of time.

The Turtle Patrol Volunteers who spotted the animal on the beach did everything right to help us bring the animal to the hospital.

What should you do if you spot a stranded dolphin, whale or sea turtle?

Then, you can provide supportive care until help arrives: 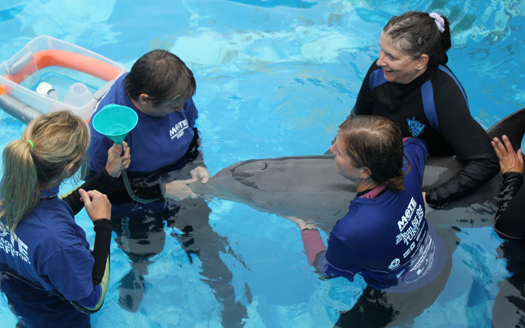