1/15 This turtle was found floating offshore from Nokomis, Florida and was brought to the Sea Turtle Rehabilitation Hospital for treatment. Blood for initial workup was taken this evening, but the turtle is resting comfortably in a tank until the results are in and treatment is begun. 1/18 This turtle is eating well and blood work does not indicate anything in particular. We will be taking radiographs and observing the turtle for the next few days. 1/19 Radiographs indicate that there may be some intestinal blockage. The turtle is not eating as well as when he arrived. Blood tests indicate that its white count is going up, so it has been started on antibiotics (amikacin). 1/20 Flipper finally began eating again, taking squid and shrimp. 1/25 Flipper continues to increase his consumption of food. 1/31 Turtle continues to improve. 2/5 This turtle has decreased his food consumption and appears to have an intestinal infection. Otherwise, doing well. 2/9 Turtle is finally eating well, especially squid, and is more active. 2/15 Flipper is now gaining weight and doing fairly well. 2/21 This turtle continues to do well and is gaining about one pound per week. We have taken it off all medications and will be observing for changes for the next two weeks. 2/26 White count is staying down, even without antibiotics. 3/5 White count is still normal and turtle is gaining weight. May be releasable by next week. 3/12 Turtle continues to gain weight and will likely be released in the next two weeks. 3/21 Flipper has developed an infection in several joints of his flippers. He has been started on amikacin and unasyn which seems to be helping. Turtle will have to be here a while longer. 4/5 Doing much better on the two antibiotics. Continues to eat well. 4/19 Joint infections are responding well to treatment. Turtle is currently being treated for blood flukes. 5/1 Turtle's appetite has greatly improved and white count is down to normal. 5/15 The turtle has been taken off all medications and may be releasable in the next month. 5/23 White count is still normal without medication and turtle is gaining weight fairly quickly. 5/31 Everything continues to look good with this turtle. 6/20 Turtle continues to do well and may be ready for release soon. 9/11 Turtle has developed numerous skin lesions and has had surgery twice to remove the growths. Turtle continues to do well but will probably be in rehab for at least another month. 11/2 None of the growths have reappeared, but one additional growth has appeared on a rear flipper. This growth will be removed next week. Histopathology of the growths indicate that they are NOT fibropapillomas. 3/21/02 After going back and forth regarding fibropapillomas, it appears that this turtle has growths internally, in the area of the liver and kidneys. Liver enzyme values are very high but the turtle is eating fairly well. Still trying to diagnose the growths. 5/1 A large number of growths were removed from the turtles skin and carapace last week. The remaining few will be removed in a couple of weeks. Liver enzymes have come down considerably and appetite is very good. Turtle is in manatee habitat. 6/26 All growths have been removed and so far, there does not appear to be any regrowth. Liver enzymes are still high, but coming down slowly. Appetite is good and turtle is gaining weight. 9/10 Turtle has a few regrowths taking place on its carapace. Plan is to remove them again soon. Otherwise, doing very well. 1/1/03 Growths were removed in November and there are no regrowths occurring at this time. Turtle is doing well. 2/27 Turtle continues to do well. 6/21 Several of the tumors have returned and will be removed in the near future. Otherwise, doing very well. 8/14 Two days ago turtle underwent cryosurgery for removal of remaining tumors. Doing well. 9/4 Next cryosurgery is planned for tomorrow. Will be doing several cryosurgeries to get deep tumors. Lesions are improving. 10/7 Had another cryosurgery this morning and turmors are almost completely gone. Turtle is doing well otherwise. 2/13 Areas of cryosurgery had been healing well. Unfortunately, the turtle developed some internal tumors and had to be euthanized last night. Necropsy this morning found six tumors in the lungs and coelomic cavity. Diagnosis awaits pathology report. 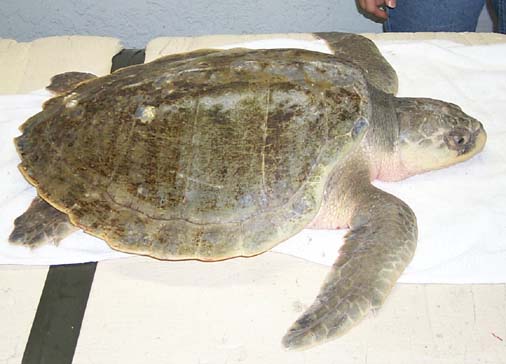 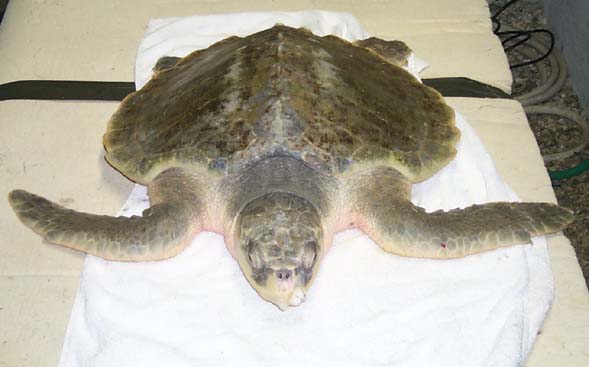 Mote scientists are working to restore scallops. The team is training citizen scientists to survey for scallops, build scallop monitoring devices and participate in raising scallops for release.