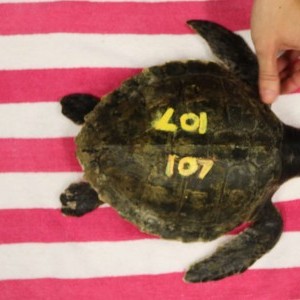 11/25/2020  This turtle (107) is part of the cold stun even that happens in New England area every year. 107 was brought to the National Marine Life Center for initial care.

11/28/2020  107 was transferred with other turtles to from New England to Florida by a non-profit organization called Turtles Fly Too. 107 is part of the group that came to Mote Marine Laboratory and Aquarium's Sea Turtle Hospital for rehabilitation, here the turtle was named Linus.

11/29/2020  Linus was begun on an injectable antibiotic, fluids and medicated eye drops due to some sort of trauma before being rescued. Linus began foraging food right away even without being able to see yet.

12/14/2020  Linus's eyes have officialy recovered and there are two beautiful eyes. We were concerned the trauma might have been too much.

12/18/2020  Linus has been moved upstairs into a solo enclosure within one of Mote's dolphin rehabilitation tanks. 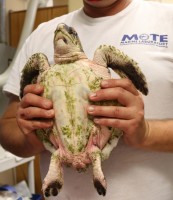