This turtle was found floating in the surf on Turtle Beach. It had numerous barnacles on it and there were also fibropapillomas on both eyes and on its skin. The lesions on the eyes did not appear to be affecting the vision. When placed in water, the turtle floated very high in the water and could not dive. One and a half liters (about 1/2 gallons) of air were removed from the coelomic cavity and the turtle was then able to swim and dive. It started eating the next morning. 5/6 Pappy has been eating well and has had normal blood values so surgery was performed today to remove most of the fibropapilloma tumors. The remaining tumors will be removed once the turtle heals from the first surgery. 6/17 Turtle is doing very well and is gaining weight. Remaining tumors will be removed in the next week. 7/4 All tumors have been removed at this point, including the ones on the eyes. Turtle is doing well with a good appetite. 7/25 Turtle continues to do very well. 8/14 No reoccurence of tumors. Doing very well. 8/22 Continuing to do well. 9/4 No evidence of tumors and appetite is excellent. 10/7 Continues to do well with no evidence of tumors. 3/5/04 Turtle continues to do well. There has been no evidence of tumors. Turtle has been moved into the Manatee Display Habitat for more enrichment and activity in preparation for possible release this summer. 4/4 Turtle is doing well and color is returning. Still looking good for summer release. 6/13 Turtle continues to do well with no new tumors. Should be ready for release within one month. 6/30 Turtle has been declared releasable and will be released next week near where it stranded. 7/6 Turtle is all set for release tomorrow morning. 7/7 Turtle was released this morning from Turtle Beach, where it stranded. 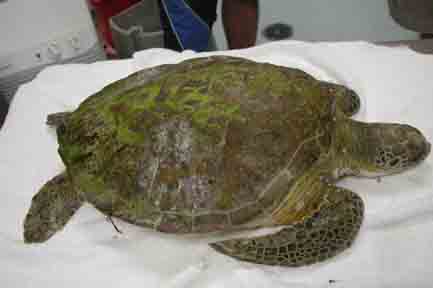 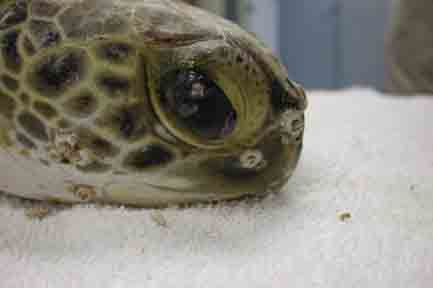