Salem was released into the Gulf of Mexico on Jan. 28, 2019. Read more about the release here. 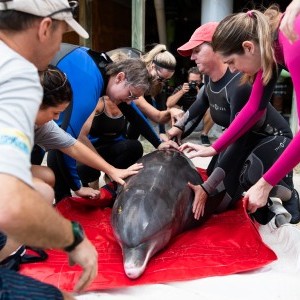 Support Mote's animal hospitals:
Critical care for just one dolphin costs thousands of dollars per day. At the same time, the Lab as a whole is responding to multiple ecological challenges, including the impacts of an ongoing Florida red tide bloom. While emergency government aid has helped with parts of our response efforts, it cannot close the gap facing Mote as a nonprofit. Community support can make all the difference: Please visit mote.org/donate and choose "Marine animal rescue and rehabilitation" from the drop-down menu.

Salem's rescue illustrates an important lesson for stranded animal response. FWC staff said that members of the public tried to push the dolphin back out to sea and then she re-stranded. It's important that the public never push a stranded marine animal back, but instead, report strandings immediately to trained wildlife responders.

If you see a distressed or dead sea turtle, manatee, dolphin or whale in Sarasota or Manatee counties, Florida, contact Mote's Stranding Investigations Program, a 24-hour response program, at 888-345-2335. Be ready to provide a thorough description of what the animal looks like, and of any behaviors it is showing. Take photos and video if possible.

Anywhere in the southeastern U.S., you can call (877) WHALE-HELP (877-942-5343) to be connected to your local Marine Mammal Stranding Network organization.