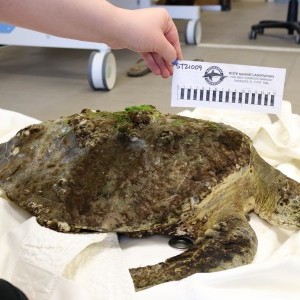 02/13/2021  Turtle was found floating between Tripod and Shell Keys in Ten Thosand Islands, Collier County.  "Shellkey" was transported to Mote.  Upon arrival, animal had a physical exam, was weighed (13.7 kg), and had blood work done.   Shellkey was given subcutaneous fluids and was put into a very shallow reab. pool.

04/06/2021  Shellkey is active and continues to eat well.  Animal is still positively buoyant though ("bubble butt").  Repeat radiographs show transection/fracture of the spine at the lumbosacral junction and a fracture with displacement of right hip.  There also appears to be some free air at caudal lateral margin of left lung field which may attribute to the buoyancy issues.  Blood values are improving and antibiotics were discontinued.

04/26/2021  Animal was anesthetized for surgical removal of fibropapilloma tumors and endoscopic sex determination.  Shellkey is a male!  Two small weights were attached to anima'ls carapace to help achieve neutral buoyancy in the water column.

05/10/2021  Shellkey is recovering well from surgery.  Initially he remained positively buoyant, but now the weights on his carapace seem to be too heavy so they were replaced with one smaller one.

05/22/2021  Because of buoyancy issues, Shellkey is not a candidate for successful release into the wild.  Mote personnel have begun hand-feeding the animal and getting him used to human contact.  FWC will hopefully be able to find him a permanent home at a zoo or aquarium in the future.

07/17/2021  Shellkey remains active and has a good appetite.  He was transported to Veterinary Surgery Center of Sarasota yesterday for a CT scan.  Results are pending.

07/30/2021   Animal was euthanized due to poor prognosis.  His tumors continued to regrow and buoyancy issues was not improved.

Mote scientists have been pioneering marine aquaponics—farming saltwater fish and plants together in a sustainable, closed-loop system. In fact, Mote has launched an 8,216-square-foot aquaponics farm to demonstrate this exciting sustainable food technology at a scale relevant to commercial farms.