Released near Marco Island on September 14, 2003

This turtle is a large adult male that was found floating offshore from New Pass. On admission it was very lethargic and poorly responsive. It was named "Stubby" due to its short tail, which is normally very long in adult males. It is suspected to have an intestinal blockage of some sort. It was started on antibiotics and anti-inflammatory agents as well as IV fluids. After 4 days, the turtle was started on squid and herring gruel given by stomach tube. 9/6 This turtle seems to be very slowly improving each day. It is become less dehydrated and shows an interest in solid food, but is unable to grasp food with his mouth. Will continue the gruel for now. 9/10 Turtle seems to be getting stronger each day and is now in deeper water. 9/12 Still improving slowly. Still unable to grasp solid food, but is taking gruel well. 9/15 Taking more gruel and fluids via stomach tube and is more reactive. 9/18 Stubby is now defecating every day and is now passing mineral oil that he had received orally last week. This indicates that the entire GI tract is open and working at this point. Turtle still unable to grasp solid food with its mouth. 9/27 Turtle is still receiving gruel via stomach tube but is now gaining weight. Still unable to voluntarily open his mouth, but seems to be getting stronger bite when being tubed. 10/3 Turtle has gained about 15 pounds in the last two weeks. Still unable to open his mouth on his own. 10/10 Stubby is still gaining weight on gruel, but has yet to eat any solid food. Very alert and responsive. Other facilities that have seen a similar condition suggest it may take 3-4 months to resolve. 12/16 Very little change in the last two months. Continuing to receive gruel via stomach tube, but still unable to eat solid food. 1/1/03 Turtle is still gaining weight despite the fact that he is still not eating solid food. Seems to be doing well otherwise. 1/5 Yesterday, just over four months since admission, the turtle finally began to eat solid food. He is still weak in the jaw area, but can finally take the solid food. 1/7 Turtle is eating more every day and is becoming stronger. 1/14 Turtle is now beginning to retrieve food from the bottom of the tank and the appetite is very good. Bloodwork appears normal. 2/27 Stubby went through about a 3 week migration period when he did not eat, but now is eating everything offered. 5/15 Stubby continues to do well and is being temporarily housed in the same tank (but separated by a flow-through gate) as two adult female turtles (Shelly and Montego). This is being done as an experiment to see a male presence will induce ovulation in the females. 6/17 Stubby is beginning to be able to pick up some food off the bottom of his tank. May be releasable in the next couple of months. 7/4 Stubby is eating very well and is consequently gaining weight. Looks good for a release before the end of the summer. 7/25 Stubby is getting very close to being ready for release, possibly within the next couple of weeks. 8/1 Turtle is doing very well. We are currently evaluating the red tide situation in the area for possible release in the near future. 8/14 Continuing to do well, but so is the red tide in the area! 8/22 Hoping to be able to release the turtle within the next two weeks. 9/4 Making plans for release, possibly next week. 9/11 Stubby and Silver are now scheduled for release on 9/14 near Marco Island, FL. 9/14 Turtle was released today. 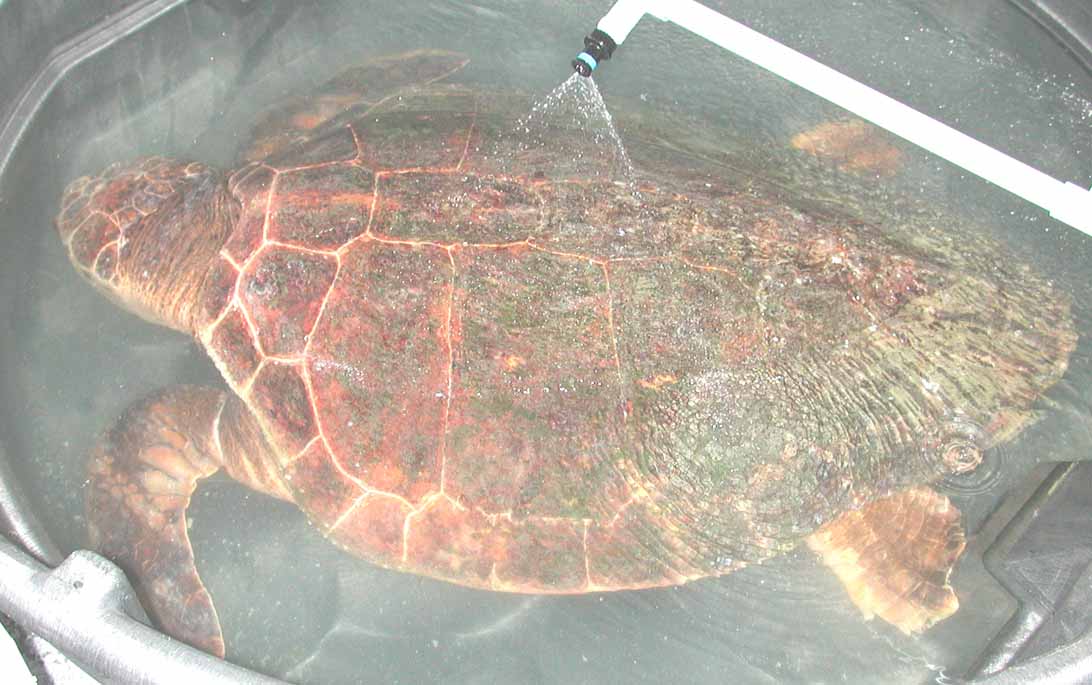 View of Stubby in shallow tank shortly after arrival 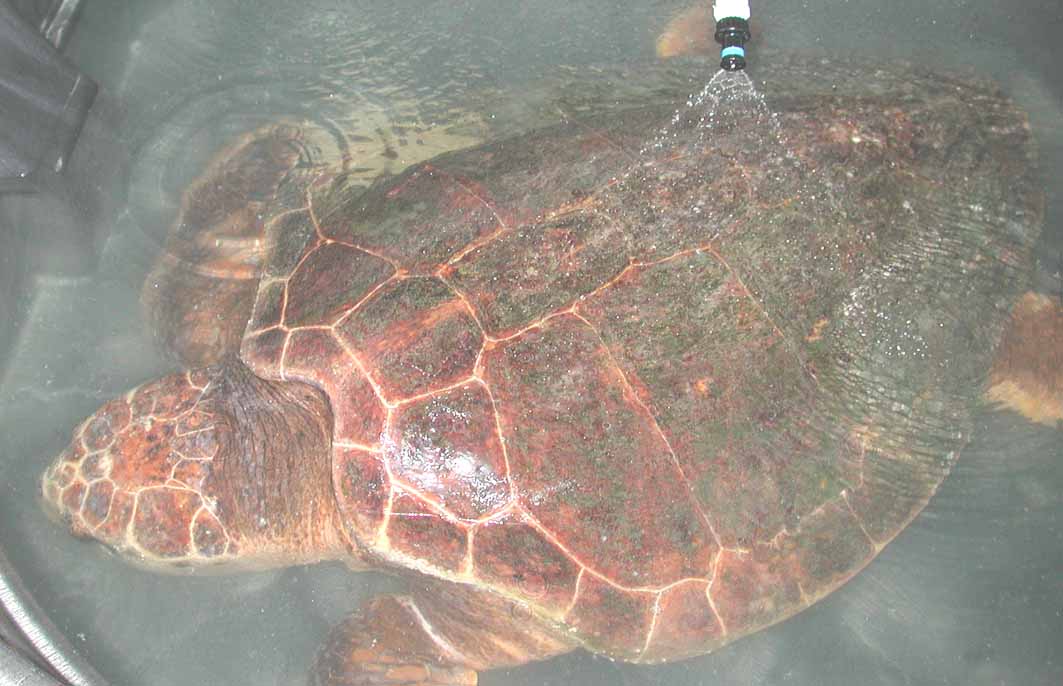 Another view about the same time, still in the shallow tank