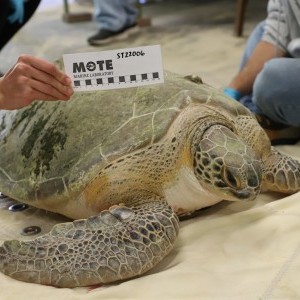 02/06/2022  Turtle was found floating in Redfish Pass, Captiva Island in Lee County.  She was transported to Clinic for the Rehabilitation of Wildlife (CROW) for rehabilitation.  Exam findings show a healed caudal carapace fracture, amputation of the left rear flipper, and tail amputation all likely caused by a boat strike.

02/09/2022  Turtle was transferred to Mote for continued rehabilitation.  "Tater" is being kept in a shallow rehab. pool due to buoyancy issues.   She is receiving subcutaneous fluids until eating regularly.

02/18/2022 Tater is now eating all seafood items offered and romaine lettuce.  She was started on an oral antibiotic due to an elevating white blood cell count.  She is still lethargic and being kept in shallow water due to buoyancy issues.

03/09/2022  Tater continues to eat well.  She is currently on two different oral antibiotics due to buoyancy issues and an elevated white blood cell count.

04/04/2022  Tater's blood values are improving, so antibiotics were discontinued.  She continues to have buoyancy issues for the majority of the time.

04/07/2022  Tater was moved to a large rehab. pool to observe her buoyancy in a larger, deeper environment over time.

04/27/2022  Tater was able to sit at the bottom of the deeper tank, but her caudal end was buoyant.  She was moved back into a smaller tank and weights were attached to her carapace using epoxy.  The weights allow her to sit flat at the bottom and achieve neutral buoyancy.  The weights are not a permanent fix, however, so animal is deemed non-releasable due to unresolved permanent buoyancy issues secondary to the healed boat strike.

05/07/2022  Because Tater is medically non-releasable, she is now being hand-fed to get her used to being around people.  She will remain in the sea turtle rehab. hospital at Mote until FWC places her in a permanent facility. 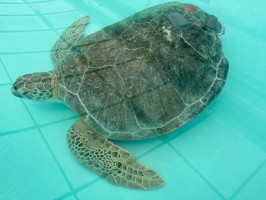 Manatees make sounds—in fact, they make five different calls: squeaks, high squeaks, squeals, squeak-squeals, and chirps. They even have “graded” calls, meaning they can adjust a single call to convey more nuances of what they’re doing or how they’re feeling. Think of how a cat adjusts its “meow” when startled, happy, or excited. Mote scientists study manatee vocalizations to better understand the behavior of these imperiled mammals.