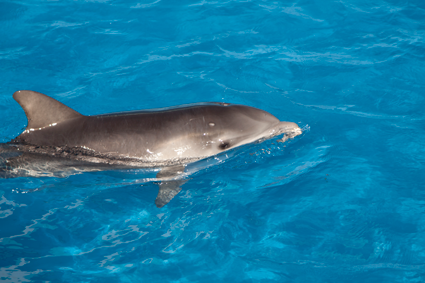 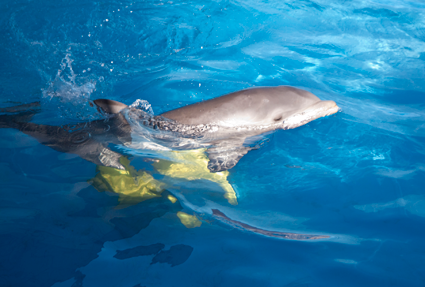 In this photo taken on Jan. 28, Taz interacts with an environmental enrichment device, or EED. EEDs are objects designed to make animals' environments more interesting and stimulating and help exercise their bodies and minds. These enrichment devices come in various shapes, sizes and colors.  Mote provides them not just for Taz, but also for our resident animals. Photo copyright Mote Marine Laboratory. 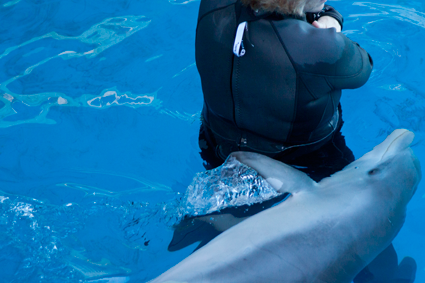 1/13 Taz was admitted to Mote's Dolphin and Whale Hospital after stranding on a sandbar in the J.N. Ding Darliing National Wildlife Refuge on Sanibel Island in Lee County, Fla., today. A member of the public found the dolphin and alerted Refuge staff, who reported the stranding to Florida's Fish and Wildlife Conservation Commission (FWC). FWC staff rescued the animal, transferring it to Mote staff part way through the trip to Sarasota. Taz is estimated to be as young as 6 months old. He is about 55 inches and weighs just 90 pounds! During a short medical exam, staff took blood and fecal samples and administered fluids. We walked him around the tank for a short period of time before he started swimming on his own. Taz remains under close supervision and will be monitored 24 hours a day. Why the dolphin stranded remains uncertain, but rescuers found the calf separated from its mother, which was not in sight. Bottlenose dolphin calves typically stay with their mothers until they are 3 to 6 years old, depending on them for food, protection and to help them learn how to feed independently and to safely navigate their environment.

1/19 Taz is beginning to gain weight, which is a good sign. A recent blood test has turned up signs of infection, so Taz is being treated with antibiotics and is responding well. He is eating about every two hours and continues to be monitored 'round the clock by Mote staff and volunteers. This week, Mote's animal care staff plan to weigh Taz again and do additional blood tests to check for any changes. So far, we are pleased with his progress — but we should note that his condition could change at any time.

1/31 Taz is gaining a healthy amount of weight and showing other signs of improvement. Since his arrival at Mote, Taz has gained an estimated 12 pounds. He is fed nine times a day with formula designed for bottlenose dolphin calves, eating about 4 liters per day. Taz was successfully treated for an infection — a common problem for stranded animals — and was taken off antibiotics on Jan. 25. Taz is interacting well with Mote staff and specially-trained volunteers. Social interaction is important for bottlenose dolphin calves like Taz, who was separated from his mother and cannot survive on his own. Mote’s animal care team remains optimistic about Taz’s condition, but it’s important to note that his health could change at any time. The team will continue to monitor Taz’s condition day and night. The National Marine Fisheries Service of the National Oceanic and Atmospheric Administration is the federal agency that oversees and regulates the care of wild and stranded dolphins. Because of his young age and the fact that he lacks the survival and social skills necessary for survival in the wild, Taz has been deemed by this agency as non-releasable.

2/4 Taz has gained 17 pounds since arriving at Mote and his health remains stable, though his condition could change at any time and must be monitored closely. Taz is fed every three hours with a special formula made for bottlenose dolphin calves and he continues interacting well with Mote staff and specially trained volunteers. Social interaction is important for bottlenose dolphin calves like Taz, who is an orphan and cannot survive on his own. Taz is also given objects called environmental enrichment devices, which are special toys designed to make his environment more stimulating.

3/1 We are happy to report that Taz has moved to his new home at the Indianapolis Zoo and is adjusting well to his new surroundings. Lynne Byrd, Mote’s Rehabilitation and Medical Care Coordinator, made the trip with Taz and said he’s doing great so far. “He’s beeneating and playing and getting a lot of attention from his new trainers,” she said.

Taz was declared non-releasable by the National Marine Fisheries Service, which oversees the care and protection of wild marine mammals. Because Taz stranded without his mother — who would typically care for him for three to six years — NMFS determined that he could not survive on his own if returned to the wild.

NMFS officials decided that the best place for him to live is the Indianapolis Zoo, which has experienced husbandry and veterinarian staff and a social group of two male and five female bottlenose dolphins. Experts hope that one of the female dolphins will “adopt” Taz as her own.

Mote has been rehabbing dolphins and whales at our Sarasota, Fla.-based facilities since 1992. Our goal is to provide the most humane treatment possible for live-stranded dolphins and whales and to have our critical care facilities available for sick animals at a moment’s notice. There is no health insurance for sick wildlife and there are few federal or state funding sources available to pay for these efforts. Without financial support from the community, Mote’s hospitals would not be able to receive and care for animals like Taz.