Tripod was brought into the Sea Turtle Nursery as a hatchling. His right front flipper had been removed by a predator (bird or crab). Being so young, the wound healed very quickly. This turtle was kept on display until it is large enough to be released. The missing flipper should cause him no problem, as a large number of mature turtles are seen on the nesting beaches that are missing all or part of a flipper. It does not hinder them at all.

Lessons: Tripod had to be hand-reared as a hatchling. This can cause them to become "surface feeders", a condition that is not good for them once they are released into the wild. Several methods were employed to encourage the turtle to spend most of its time on the bottom rather than on the surface of the water. We have also modified our hand-rearing techniques to eliminate this problem from developing in the future. 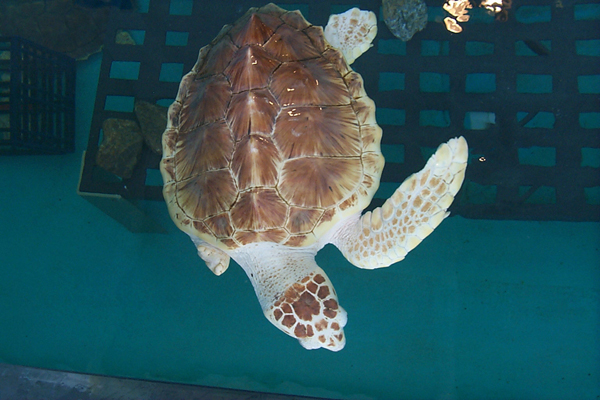 Coral reefs are declining because of climate change—warming temperatures and ocean acidification—but Mote scientists are learning that some corals may cope better than others. For instance, Mote led research has revealed climate change-resilient, native genetic varieties of staghorn coral (an important Florida coral species), and we're growing them in our coral restoration nurseries.