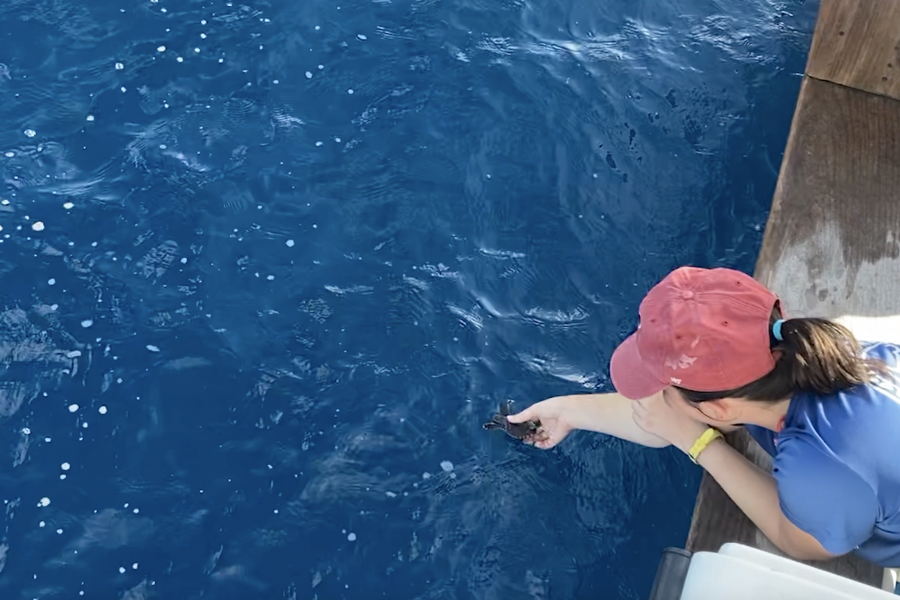 Over the past week, Mote Marine Laboratory & Aquarium took over 40 sea turtle hatchlings offshore to be released following rehabilitation. Mote’s Hatchling Hospital successfully rehabilitated 33 hatchlings, many of which were recovered from pools after they became disoriented. Mote’s team made an additional offshore trip this week to release 10 additional hatchlings that recovered at Clearwater Marine Aquarium’s marine life hospital. These hatchlings suffered from a variety of impairments including disorientation and malnutrition.

Since sea turtle season began officially in May—although the first nest arrived in Sarasota in April—nearly 800 sea turtle hatchlings have been successfully rehabilitated at Mote’s Hatchling Hospital and over 150 at Clearwater Marine Aquarium. These hatchlings might be recovered during permitted nest excavations or perhaps found after a nest predation event. However, by far the most common reason that a hatchling finds itself in need of TLC is due to disorientation, which occurs when hatchlings emerge from the nest and travel towards artificial lighting instead of the water. Sea turtle hatchlings have a limited energy supply—they emerge from their egg with a yolk sac that nourishes them for a short period of time—and wasting energy going the wrong direction can be deadly.

Check out the rehab and release below!

While nesting season is winding down, over 300 nests still remain on Sarasota-area beaches and another 100 nests remain on north Pinellas County beaches. Artificial lighting and other human-caused issues remain the biggest threat to the remaining nests and the survival of future hatchlings. Simple changes can make an ocean of difference:

Shield or turn off outdoor lights that are visible on the beach from May through October.

Tips for all year long:

Mote Marine Laboratory & Aquarium, based in Sarasota, Florida, has conducted marine research since its founding as a small, one-room laboratory in 1955. Since then, Mote has grown to encompass more than 20 research and conservation programs that span the spectrum of marine science: sustainable aquaculture systems designed to alleviate growing pressures on wild fish populations; red tide research that works to inform the public and mitigate the adverse effects of red tide with innovative technologies; marine animal science, conservation and rehabilitation programs dedicated to the protection of animals such as sea turtles, manatees and dolphins; and much more. Mote Aquarium, accredited by the Association of Zoos & Aquariums, is open 365 days per year. Learn more at mote.org or connect with @motemarinelab on Facebook, TikTok, Twitter, Instagram and YouTube.

Clearwater Marine Aquarium (CMA) is a 501(c)(3) nonprofit working marine rescue center dedicated to inspiring the human spirit through leadership in education, research, rescue, rehabilitation and release. CMA is home to rescued dolphins, sea turtles, river otters, stingrays, a nurse shark and more. Winter the dolphin’s story of survival, after an injury that caused her to lose her tail, has impacted millions of people around the world. Major motion picture Dolphin Tale (2011) features Winter’s story and its sequel Dolphin Tale 2 (2014) features the incredible story of Hope, a young resident dolphin of CMA. Through Clearwater Marine Aquarium Research Institute, CMA conducts important global research focused on protecting manatees, right whales and sea turtles. The mission and potential to change people’s lives differentiates Clearwater Marine Aquarium from any other aquarium in the world. cmaquarium.org