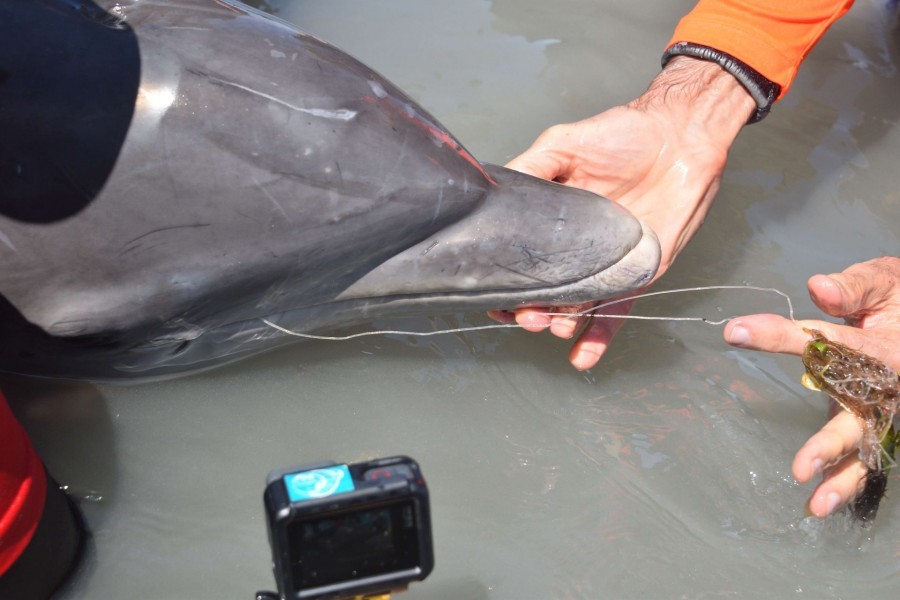 (Mote Marine Laboratory is pleased to share this article provided by NOAA Fisheries on March 12, 2019.)

A dolphin calf is swimming freely again with its mother after being rescued yesterday by biologists.

The young dolphin was reported over the past few weeks in Lemon Bay, near Englewood, Florida, with fishing line and gear wrapped around its body and tail, and through its mouth.

A team of biologists and veterinarians from nine organizations involved in stranding response along Florida’s west coast mobilized with a mission to catch both mom and her calf, take the gear off, conduct a short health assessment and release them back into the wild.

The rescue was a success. In order to keep mom and her calf calm, biologists held both close together while the team disentangled the animal from fishing line embedded in the animal's tail and its mouth. The pair exchanged whistles with each other as they were held.

The entanglement was significant, with fishing line cutting through each of side of the the calf’s tail. The line was also going through the calf’s mouth, forming a “bridle." The team was able to cut the line and pull it through, give the calf an antibiotic shot, take measurements and collect a blood sample.

After about an hour of treatment the calf was free of fishing line and gear and both animals swam away looking strong.

The rescue was conducted under a NOAA permit, and led by the Chicago Zoological Society's Dolphin Research Program working in collaboration with partners including the Florida Fish and Wildlife Conservation Commission, Mote Marine Laboratory, the University of Florida’s College of Veterinary Medicine, Clearwater Marine Aquarium and Charlotte County Sheriff’s Office.

In the following weeks biologists will continue to go out and monitor the calf's progress.

The best way to help marine life in trouble is to call trained responders, report your location and wait near the animal. Please call 1-877-WHALE HELP to report injured or dead marine life or use NOAA's Dolphin and Whale 911 phone app.