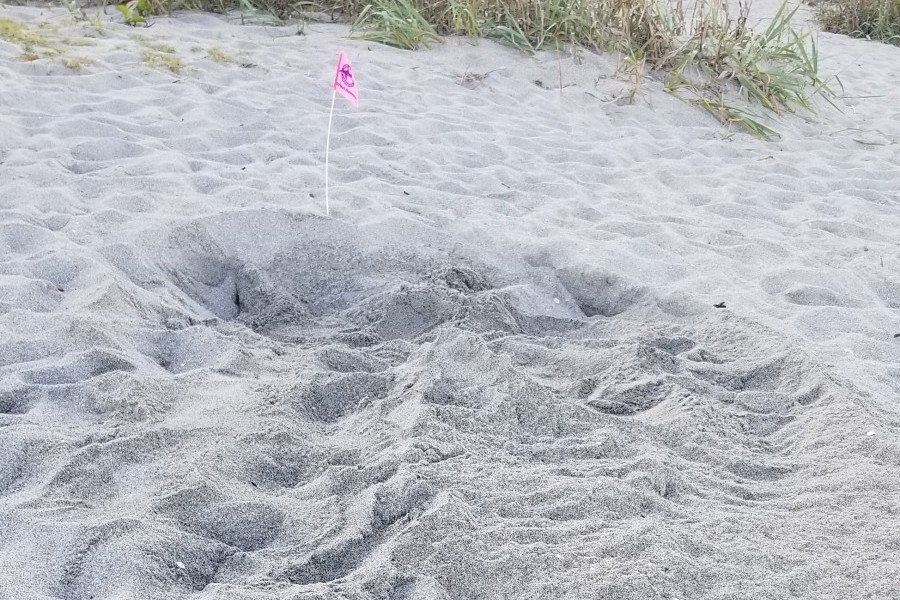 Mote began monitoring Sarasota area beaches on April 15, and volunteers saw the telltale signs of a nest during their patrol early Thursday morning. A crawl was seen leading from the water up to a nest, and other clues in the sand were used to identify the nest itself and the species that created the nest. Volunteers Peg Magee and Joyce Thompson responded to the reports to confirm the nest and place stakes to mark the nest. Magee and Thompson are seasoned volunteers, beginning their 14th and 12th years, respectively, patrolling local beaches.

The nest was created by a loggerhead sea turtle, Sarasota's most abundant nester. Sarasota County is home to the densest loggerhead sea turtle nesting in the Gulf of Mexico. Green sea turtles nest on area beaches as well, often arriving later in the season, and although relatively low in number, STCRP has documented an increase in green sea turtle nests in Sarasota in the last 20 years. Other signs of sea turtles locally also include a loggerhead false crawl—where a female comes onto the beach and leaves without creating a nest—the day before on Siesta Key.

“Once again, sea turtles have arrived on our beaches a little bit before the official start of season,” said Melissa Bernhard, Mote Senior Biologist and Conservation Manager. “We’re looking forward to another successful season for sea turtles. We’ve seen incredible growth in nesting locally in the last decade, and we hope to see these threatened animals continue to increase their numbers.”

Mote’s 35th annual Run for the Turtles event, virtual this year, is also underway. Participants can run, walk or crawl from anywhere in the world, now through June 30th, to support Mote’s sea turtle monitoring efforts. Information and registration is available at runsignup.com/Race/FL/Sarasota/RunfortheTurtles.

With the arrival of sea turtles, it’s important that members of the public enjoy the beaches while being mindful of nesting sea turtles. A list of tips and best practices are below, and Bernhard adds, “The best way to remember how to help turtles is to think to yourself, ‘am I leaving the beach as natural and undisturbed as possible?’”

How to protect sea turtles when you’re on land and on the water: