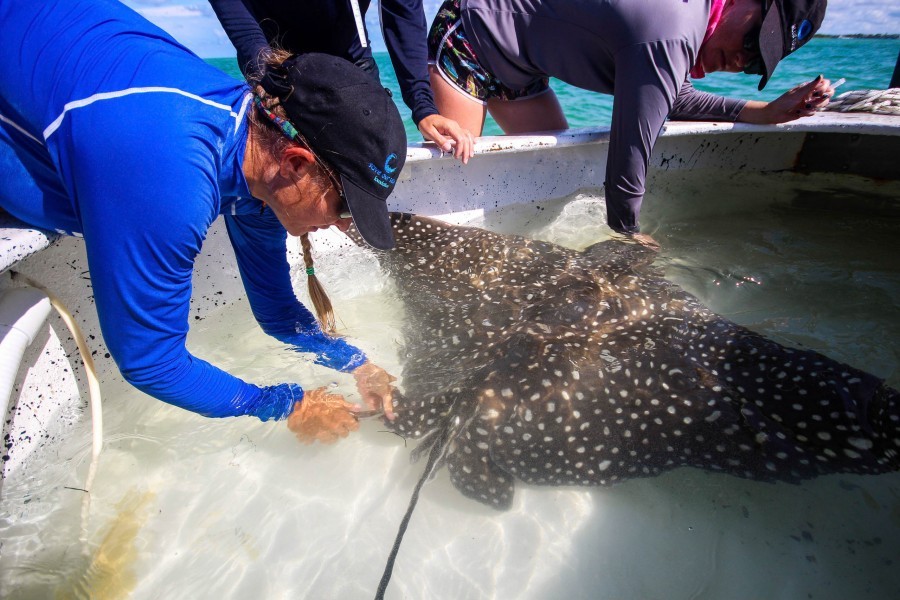 This year, studies of multiple marine species in Sarasota Bay advanced thanks to the collaborative work of Mote Marine Laboratory, the Sarasota Dolphin Research Program (SDRP, a Chicago Zoological Society program in collaboration with Mote), New College of Florida, Florida Atlantic University (FAU) at Harbor Branch and Loggerhead Instruments – partners who operate the Sarasota Coast Acoustic Network (SCAN).  The network has two primary components: tracking tagged animals and listening for environmental sounds including those produced by dolphins and fish.

SCAN has provided valuable data on the movement of several local fish species. One of those species, the spotted eagle ray, has been studied by Mote scientists for nine years due to the lack of information on the ray’s ecological importance. Tagging research, including through SCAN, has shown that spotted eagle rays are seasonally resident to the Sarasota region from the months of March-September. Additionally, more than 60 percent of the rays will return to Sarasota the following year.

New results from 2018 support hypothesis that spotted eagle rays may be capable of detecting and leaving areas experiencing high levels of Florida red tide. During this year’s red tide bloom, all of the rays tagged in the area exited Sarasota Bay as red tide levels reached “medium” (100,000 cells per liter of water), a concentration known to have negative effects on small fishes. Scientists from Mote, FAU and partners will continue study these animals to learn more about their movement patterns and habitat use, to support effective conservation of the species locally and internationally. The team plans to publish their latest research on the movement and habitat use of spotted eagle rays in the area during summer 2019.