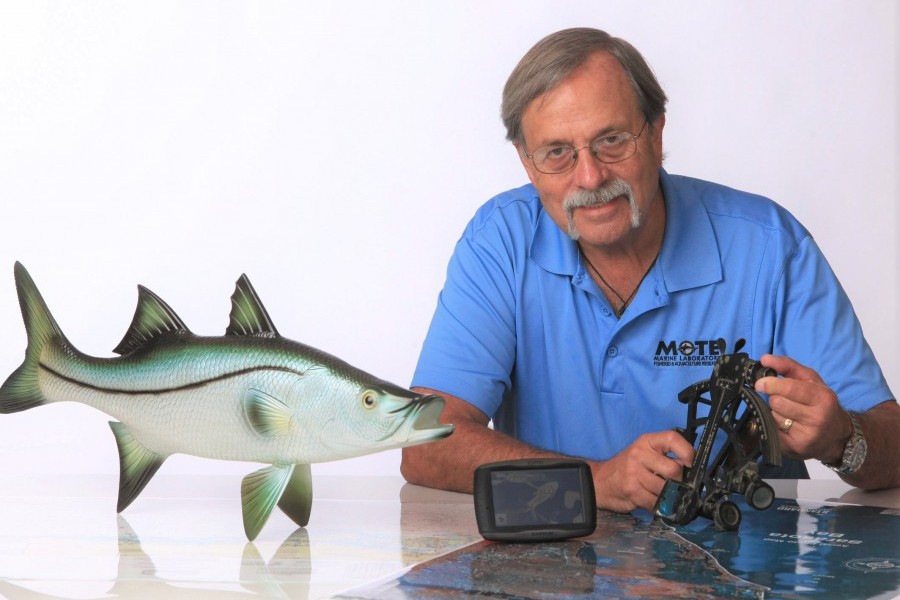 Mote Marine Laboratory’s Dr. Ken Leber transitioned to the role of Senior Scientist Emeritus on Jan. 5, 2021, capping off his groundbreaking 35-year career focused on responsibly enhancing fisheries that nourish communities and economies around the world.

Fisheries enhancement involves releasing fish into wild populations and/or improving fish habitat. When grounded in science and sound management, it can offer valuable benefits to ecosystems and society. Leber, working with Dr. Lee Blankenship and later with Dr. Kai Lorenzen, helped reshape this longstanding practice for a sustainability-focused 21st Century by publishing  “A responsible approach for marine stock enhancement” in 1995 and expanding it in 2010. This flagship work has been cited nearly 700 times in peer-reviewed scientific literature, and today it underpins Mote’s Fisheries Ecology & Enhancement Program—which releases tens of thousands of common snook (a popular sportfish) into southwest Florida environments to advance enhancement science, mitigate for snook die-offs, study fisheries ecology and improve enhancement practices.

Leber is an international bridge-builder who helps fisheries scientists worldwide achieve more together. For example, in the past four years, Leber has led the charge to introduce sustainable stock enhancement and help expand production of grey mullet in Egypt, Israel, Morocco and Tunisia with support from a USAID-Middle East Regional Cooperation grant. And in 2019, Leber and his team hosted 80 scientists from 14 countries at Mote for a 2019 symposium about fisheries ecology and the latest developments in enhancement science and restoration.

The 2019 symposium at Mote was a double whammy, combining two signature scientific events that Leber has helped to shepherd over the years: Mote’s and Florida State University (FSU’s) 10th International Symposium on Fisheries Ecology and the 6th International Symposium on Stock Enhancement and Sea Ranching (ISSESR). Leber has helped shape the global conversation on stock enhancement through many years of ISSESR; in 1993 he formed an International Working Group on Marine Stock Enhancement for the World Aquaculture Society, and that group became part of the scientific committee guiding years of ISSESR conferences in Norway, Japan, the U.S. (Seattle), China, Australia, and in 2019 at Mote in Sarasota, Florida.

Leber’s fascination with fisheries enhancement—and what it can do for ecosystems and communities—began decades ago. Since 1988, he has focused on developing responsible stock enhancement with particular emphasis on optimizing fish release strategies and evaluating hatchery-wild fish interactions in rivers, estuaries and bays in Hawaii and Florida. He started his stock-enhancement research program in Hawaii’s estuaries and coastal habitats with striped mullet and Pacific threadfin. In 1996, he began research on red drum and common snook stock enhancement in Florida’s estuaries and the Gulf of Mexico. Recently he has also focused on expanding use of hatcheries to evaluate ecological questions about wild stock recruitment dynamics and density dependence. Prior to joining Mote, Dr. Leber was Program Manager of the Stock-Enhancement Program at the Oceanic Institute in Waimanalo, Hawaii.

Leber joined Mote in 1996 as a Senior Scientist and Director of what was then called the Center for Fisheries Enhancement. He occupies the Charles M. Breder Chair, which was established at Mote to support the study of the biology, behavior and conservation of fishes, and over the years at Mote he has directed a multi-disciplinary research program that includes studies of fish population ecology, marine stock enhancement, marine aquaculture, stock assessment, fish dispersal, age and growth patterns, habitat requirements, habitat selection and current problems in fisheries management. He has also serves as a Courtesy Professor in the Fisheries and Aquatic Sciences Program, School of Forest Resources and Conservation, University of Florida.

He has contributed to fisheries science in Australia, China, Costa Rica, Japan, Israel and several countries in the Middle East, and he has published more than 50 articles in scientific journals and books. He has served as advisor for four Postdoctoral fellowships, four doctoral students and three master’s students, and he has helped visiting scientists from British Columbia, China, England, Japan and other nations to join research efforts at Mote. He continues to recruit top-notch scientists for the FSU William R. and Lenore Mote Eminent Scholar Chair in Fisheries Ecology and Enhancement, one of the ways he unites Mote and FSU’s best and brightest with other top scientists around the world.

Over the years, he has also helped Mote engage with recreational fishing communities to advance research benefiting species they care about—through programs including Mote’s Snook Shindig, a catch-and-release research tournament, and a recent collaboration by Mote and University of Florida to host public Fisheries Forums.

Beyond laying foundations for responsible fisheries enhancement around the world, Leber has also lain strong foundations for Mote’s future. He hired and mentored Dr. Ryan Schloesser as a Mote Postdoctoral Research Fellow, and Schloesser has since advanced to the role of Manager for Mote’s Fisheries Ecology & Enhancement Program. The Program is thriving today, in a productive collaboration with Florida Fish and Wildlife Research Institute (FWRI) and Mote’s Marine & Freshwater Aquaculture Research Program. In the past year, Mote scientists produced, tagged and released nearly 10,000 common snook into southwest Florida environments, continuing a long-term effort to understand which fisheries-enhancement methods work best and how these popular sportfish interact with their environment. That total included one group of 7,975 snook—the largest number Mote has ever produced for a single release experiment during more than 20 years of fisheries science by Mote and partners at the Florida Fish and Wildlife Conservation Commission (FWC). Mote’s Fisheries Ecology & Enhancement Program also recently established the Center for Fisheries Electronic Monitoring at Mote (CFEMM), led by Carole Neidig. CFEMM has secured about $1 million in competitive grants this year to improve fisheries data in the Gulf of Mexico to support sustainable snapper-grouper commercial fisheries.

Leber’s legacy continues to benefit Mote, fisheries science, and the planet in multiple ways. As a Senior Scientist Emeritus, he looks forward to advising and aiding Mote’s groundbreaking research and enhancement efforts around the globe for years to come.