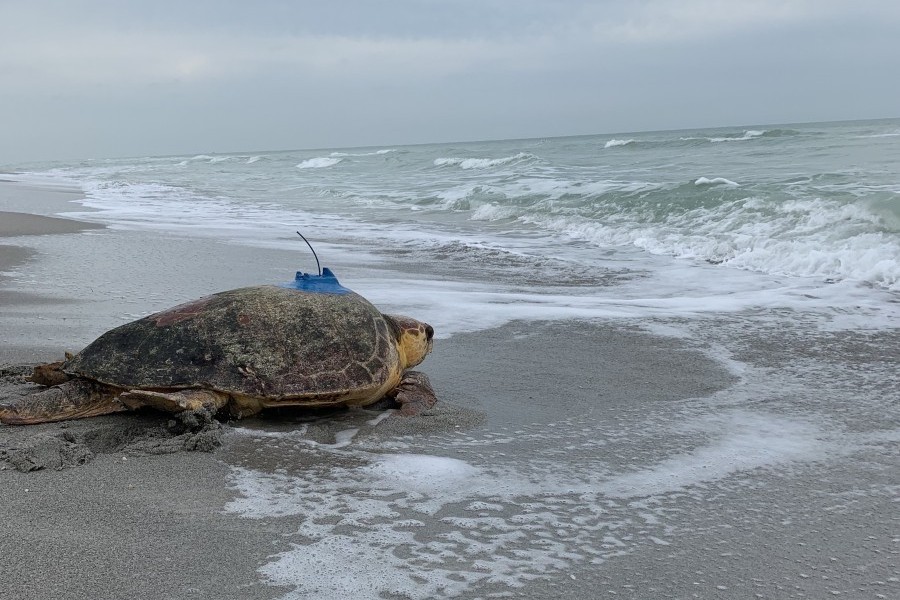 Connor crawls into the ocean

Connor, an adult male loggerhead sea turtle, returned to the Gulf of Mexico after several months of recovery at Mote's Sea Turtle Rehabilitation Hospital, but not before he received some very special "jewelry" for his journey—a satellite tag that will allow Mote scientists to continue to track Connor's whereabouts.

Connor presented with lethargy and multiple areas of skin erosion, the worst on his right front flipper where monofilament line may have been the culprit (was not found on turtle). Connor was given fluids, injectable antibiotic, and placed in a shallow rehabilitation pool.

Upon arrival, it was obvious that the turtle was a male due to its size and obvious tail. Over time, Connor slowly began to eat more and his skin healed. Read more about Connor's case at mote.org/hospital.

Connor was a good candidate for a satellite tag, and will be given a tag prior to being released by Mote's Sea Turtle Conservation & Research Program. Male sea turtles do not return to land after they leave the beach as hatchlings usually, unless they are injured or sick. Therefore, they are a more elusive group to study. By satellite tagging adult male loggerheads that stranded and received hospital care, scientists can learn more about post-release behavior of rehabilitated turtles as well as behavior, habitat, home range and migratory pathways of adult male loggerheads in the Gulf of Mexico. You can follow Connor's track at mote.org/seaturtletracking.

Satellite and other types of tags are sometimes jokingly referred to as "jewelry" by scientists that use them to study their animals, but as it turns out, Connor's satellite tag is sponsored by a jewelry company, Ocean & Company! Each sea turtle tracking bracelet purchased from Ocean & Co allows you to track a turtle satellite-tagged by Mote scientists, including Connor and other previously tagged turtles, and provides a donation to Mote’s Sea Turtle Conservation & Research Program. Check out Oecan & Co, and our other shopping partners, on our website here.

Connor received his final health check, and the satellite tag was applied to his back with a marine epoxy. After a very short drive to the gulfside of Longboat Key's Bayfront Park, a team of Mote staff and interns carried Connor down to the water's edge, where he then crawled into the ocean and went on his way!

You can help stranded wildlife!

If you see a distressed or deceased sea turtle, manatee, dolphin or whale in Sarasota or Manatee counties, report to trained responders immediately. Contact Mote’s Stranding Investigations Program via their 24-hour hotline at 888-345-2335. Below are additional tips: 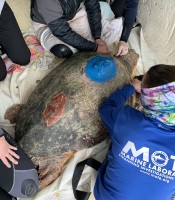 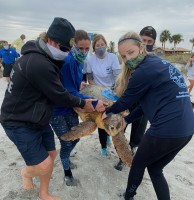 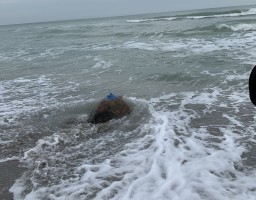