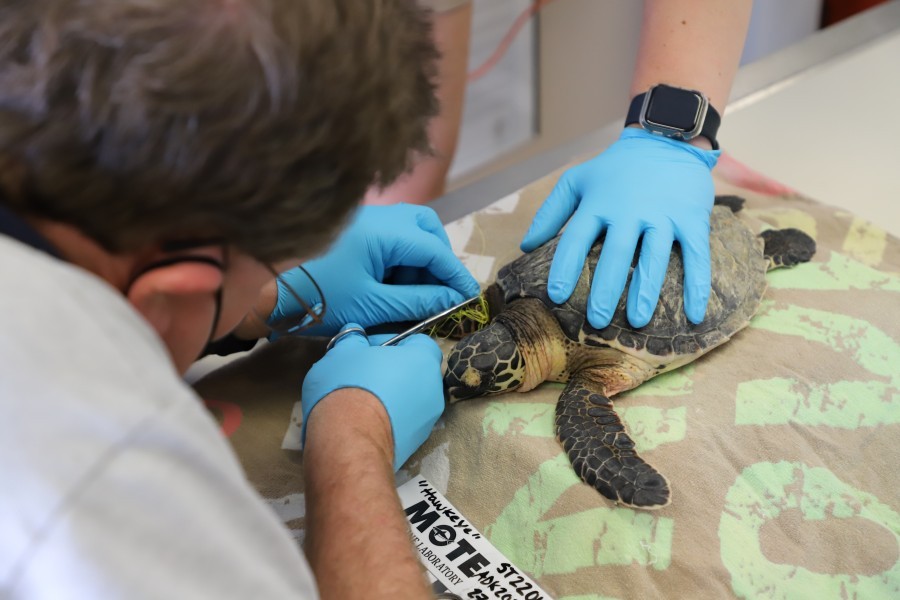 Hawkeye was released earlier this month after being rescued from the ocean entangled in fishing line.

Under the Sunshine Skyway bridge late February was Hawkeye, a hawksbill sea turtle, stuck in line tightly wrapped around its neck and flipper. A fisherman found the juvenile turtle and notified Mote's team.

The turtle was then transported to Mote, where the remaining line was removed. After spending some time in a shallow tank to recover, Hawkeye's swollen flipper went down and its appetite for shrimp grew. Mote's Sea Turtle Rehabilitation Hospital has only rescued four hawksbill sea turtles since 2001, so Hawkeye was a rare patient.

In 10 days, Hawkeye was ready to be released. Mote staff and interns carefully transported the turtle to Anna Maria Island, where they watched Hawkeye paddle out to sea.

To prevent cases like Hawkeye's, stow trash and line away, as marine debris that accidentally blows overboard or out of a truck can become ingested by or entangled around marine life. Inspect gear regularly, don't discard bait into the water or attempt to feed marine animals to keep them from lingering in the area.