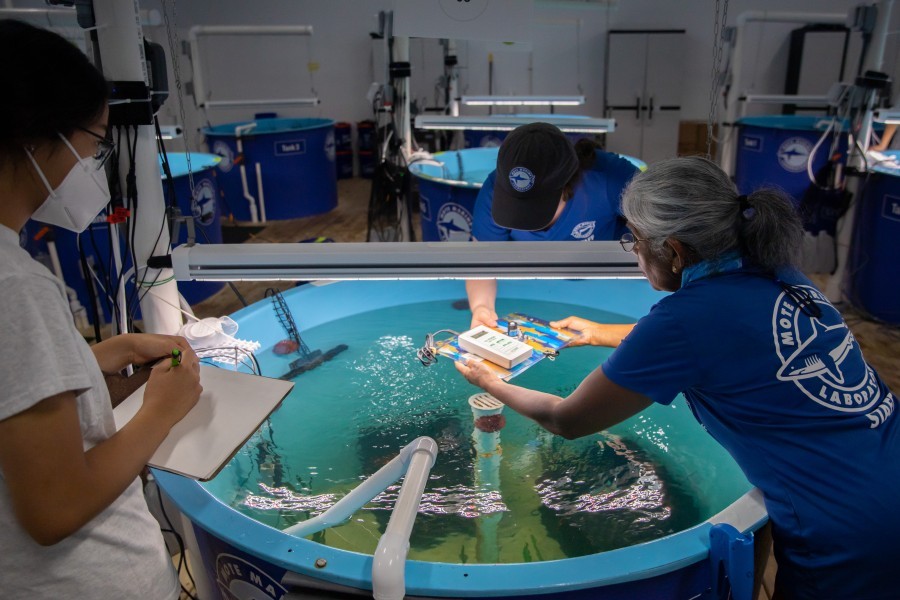 Mote Marine Laboratory & Aquarium is partnering with the University of Maryland Center for Environmental Science (UMCES) in a new $7.5 million grant from NOAA to lead an innovative U.S. Harmful Algal Bloom Control Technologies Incubator (US HAB-CTI) to advance innovative ways to control harmful algal blooms that are impacting the health of people and marine ecosystems, as well as regional economies. UMCES’ Institute of Marine and Environmental Technology in Baltimore, Maryland, will partner with Mote’s Red Tide Mitigation & Technology Development Initiative in Sarasota, Florida, to offer the first-of-its-kind center to solicit, fund, and assist the development of innovative harmful algal bloom control technology projects with commercial potential.

Harmful algal blooms, such as red tide, cause a wide variety of environmental, economic, and human health problems. They occur when algae—simple photosynthetic organisms that live in the sea and freshwater—grow out of control while producing toxic or harmful effects on people, fish, shellfish, marine mammals, and birds. The growing frequency and magnitude of harmful algal blooms has created a pressing need for ways to control these blooms in coastal waters. As scientists, governments, and agencies have worked to assess approaches, there has been increasing need to incorporate environmental compliance, risk assessments, and other permitting in the decision-making process to use a control agent or approach.

“We know first-hand how devastating HABs can be,” said Dr. Michael P. Crosby, Mote President & CEO and Co-PI on the project. “NOAA recognized the important role that our innovative Mote-UMCES collaboration will have in effectively and efficiently bringing together many diverse partners from industry, academia and non-profit organizations with a laser focus on utilizing past research and existing knowledge to develop new technologies and approaches for mitigating the impacts of HABs to the environment, economy and quality of life in communities across the U.S.”

US HAB-CTI is a unique partnership between UMCES’ Institute of Marine and Environmental Technology and Mote to solicit, fund, and assist innovative control technology projects and provide guidance on navigating the relevant licensing and permitting processes through an online clearinghouse of proven control methods. IMET and Mote will make available to grantees their research infrastructure to test mitigation compounds, technologies, and deployment mechanisms for marine, estuarine, and freshwater HAB species that negatively impact the U.S. economy, environment, and quality of life.

“Field demonstration of harmful algal bloom control techniques is needed to fill the gap between laboratory research and larger scale implementation,” said Peter Goodwin, president of the University of Maryland Center for Environmental Science. “This is an ideal partnership to address a concerning global issue.”

IMET has the capability to perform lab-based experiments with freshwater toxic HABs in freshwater, and Mote has extensive experience with Florida red tide in the Gulf of Mexico, including their lab-based testing of mitigation strategies at their inland Mote Aquaculture Research Park and their facilitation of pilot field tests during past active red tide blooms.

“In Florida, we’ve demonstrated that partnerships between research institutions, government agencies, private businesses, and other stakeholders can result in effective research that can rapidly identify potential, scalable solutions,” said Kevin Claridge, Vice President for Sponsored Research and Coastal Policy Programs. “We’re looking forward to the opportunity to expand that model even further with a national focus that includes many types of HABs.”

Annual solicitations will be announced on the US HAB-CTI and NOAA websites and through national harmful bloom networks beginning in Spring 2023. A rigorous evaluation and advisement process will assess innovative proof-of-concept project feasibility to prepare for future National Oceanic and Atmospheric Administration, National Centers for Coastal Ocean Science: Prevention, Control, and Mitigation of Harmful Algal Bloom (PCMHAB) competitive funding announcements. In addition to the core proposal process steps, guidance will be provided to researchers and potential end users about the licensing, permitting, and other environmental compliance, organized into a more user-friendly online clearinghouse covering both federal and state requirements.

In the wake of the 1997 fish kills and public concern surrounding Pfiesteria, Al Place set out to study the algae species blamed for killing fish and sickening humans in the Chesapeake Bay and its rivers. Researchers found that the dinoflagellates Karlodinium veneficum (one-celled algae that propel through water with whip-like tails) were more toxic than Pfiesteria, leading Place to suspect that Karlodinium was the real culprit. He has spent the last 25 years researching the microscopic algal cell at the Institute of Marine and Environmental Technology in Baltimore. Every year since then, blooms of Karlodinium have been implicated in fish kills along the Atlantic Coast, as well as worldwide.

Located in Baltimore’s Inner Harbor, the Institute of Marine and Environmental Technology is a strategic alliance involving scientists at the University of Maryland Center for Environmental Science, the University of Maryland Baltimore and the University of Maryland Baltimore County. Scientists are engaged in cutting-edge research in microbiology, molecular biology and biotechnology, using marine organisms to develop new drug therapies, alternative energy and innovations to improve public health. IMET contributes to sustainable marine aquaculture and fisheries in the Chesapeake Bay and marine ecosystems. and fosters early stage companies and industry partnerships, contributing to economic development in Maryland.

In 2019, in response to one of the most devastating Florida red tide blooms in history, the Florida Red Tide Mitigation & Technology Development Initiative, led by Mote Marine Laboratory in cooperation with the Florida Fish & Wildlife Conservation Commission, was established. Florida red tides are harmful algal blooms caused by higher-than-normal concentrations of Karenia brevis (microscopic algae native to the Gulf of Mexico). Florida red tides produce toxins that can cause widespread mortality of marine fishes and other wildlife, and those toxins can enter the air and cause onshore human respiratory irritation, significantly impacting quality of life and the economies of coastal communities that rely upon ecotourism and fishing. As part of the Initiative, Mote manages a 29,000-square-foot, 150,000-gallon recirculating treatment system at the Mote Aquaculture Research Park that is safely testing mitigation technologies for harmful algal blooms, away from the coastal environment. Mote’s red tide research spans several decades, and in addition to the development of mitigation technologies, includes vital monitoring of red tide conditions and relaying that information to the public, research that has unlocked more understanding of red tide’s biology, bloom dynamics, and toxin impacts, and responding to wildlife harmed by Florida red tide through sea turtle rescue and rehabilitation and stock enhancement efforts of vital sportfish.

About the University of Maryland Center for Environmental Science

The University of Maryland Center for Environmental Science (UMCES) is a leading research and educational institution working to understand and manage the world’s resources. From a network of laboratories spanning from the mountains to the sea, UMCES scientists provide sound advice to help state and national leaders manage the environment and prepare future scientists to meet the global challenges of the 21st century. umces.edu

Mote Marine Laboratory & Aquarium, based in Sarasota, Florida, has conducted marine research since its founding as a small, one-room laboratory in 1955. Since then, Mote has grown to become a global research enterprise with seven campuses and over 260 staff including more than 40 PhD-level scientists conducting research in diverse research and conservation programs that span the spectrum of marine science: sustainable aquaculture systems designed to alleviate growing pressures on wild fish populations; red tide research that works to inform the public and mitigate the adverse effects of red tide with innovative technologies; marine animal science, conservation and rehabilitation programs dedicated to the protection of animals such as sea turtles, manatees and dolphins; and much more. Mote Aquarium, accredited by the Association of Zoos & Aquariums, is open 365 days per year. Learn more at mote.org or connect with @motemarinelab on Facebook, TikTok, Twitter, Instagram and YouTube.