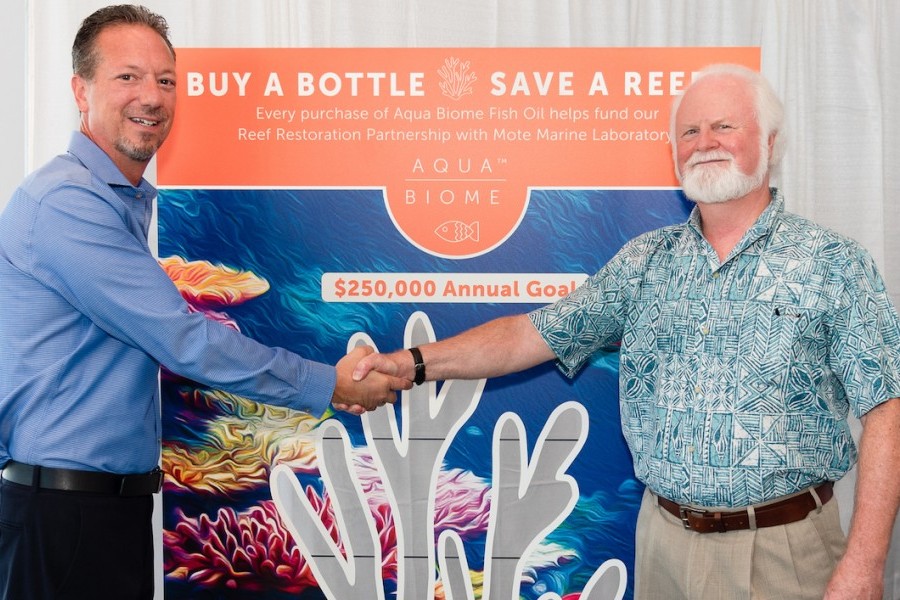 “As a company, we really feel that part of our mission is to give back,” said Scott Sensenbrenner, President, and CEO of Enzymedica. “Our Aqua Biome product line is all about improving the health of the human microbiome, and through Mote, we are helping to support the health of our oceans.”

Enzymedica’s corporate culture focuses on sustainability. As a carbon-neutral organization, they demonstrate this commitment through sustainable sourcing of ingredients and maintaining a solar panel array on the roof of their headquarters. This makes the alliance between Mote Marine Lab’s crucial efforts to heal the reefs and the new Aqua Biome product line, a perfect fit.

Aqua Biome products are found locally at Richard’s Foodporium and Professional Supplement Center. They can also be found in thousands of other independent health food stores and national chains like Sprouts, Whole Foods, and Vitamin Shoppe.

“As Mote seeks to significantly increase the number of corals we are able to outplant in the Florida Keys, we are energized by our new partnership with Enzymedica,” said Dr. Michael P. Crosby, Mote’s President & CEO. “Educational material with each bottle of Enzymedica’s Aqua Biome will help the public learn more about the importance of coral reefs, and proceeds from sales of this dietary supplement will provide donations to Mote in support of our coral restoration initiative. As two organizations based in Florida, Mote and Enzymedica are intertwined with Florida’s natural marine resources, and we applaud Enzymedica’s sense of environmental stewardship. Buy a bottle, save a reef!”

One percent of the world’s oceans are coral reefs, but they support 25 percent of all marine life. And that helps feed more than 500 million people. In just one year, 2017, about 12 percent of the oceans’ reefs were degraded. Reefs around the world are declining due to climate change, ocean acidification, coral disease, overfishing, and other stressors. In some areas of Florida and the Caribbean, coral cover has declined by 50-80 percent in the last three decades.

This threat to the health of the world’s coral reefs is what spurred Mote to develop its coral reef restoration program. Mote grows coral in underwater and land-based nurseries, where the marine research organization has more than 40,000 coral fragments at a time. Thousands of those coral fragments are planted out on the reef every year. Mote developed a “microfragmentation and fusion” method to grow corals 50 times faster in their nurseries than they grow naturally. They have a 95 percent survival rate when placed onto the reef. Mote has outplanted more than 70,000 new corals so far.

“The Florida Reef Tract, already on the decline in the last 50 years, is now suffering from an unprecedented disease, causing mass mortality,” said Dr. Erinn Muller, Mote Staff Scientist, Program Manager, and Science Director of Mote’s Elizabeth Moore International Center for Coral Reef Research & Restoration. “What’s also unprecedented is the collaboration and response of research organizations, nonprofits, aquariums, local, state and federal governments, academic institutions, and private for-profit organizations in addressing this decline. When companies like Enzymedica show their support for our work, it gives us hope and the assistance needed to restore one of our most important marine resources.”

Enzymedica’s Aqua Biome is the first product on the planet ever to specifically target the human microbiome. Unique to the product line is DPA, a type of Omega-3 missing from most other fish oil supplements that is on the cutting edge of research on fish oil products. A healthy microbiome is as imperative to a vibrant human body as a healthy reef system is imperative to vibrant oceans.

“We simply saw supporting Mote’s reef efforts with this product as the perfect fit for us to give back,” Sensenbrenner said.