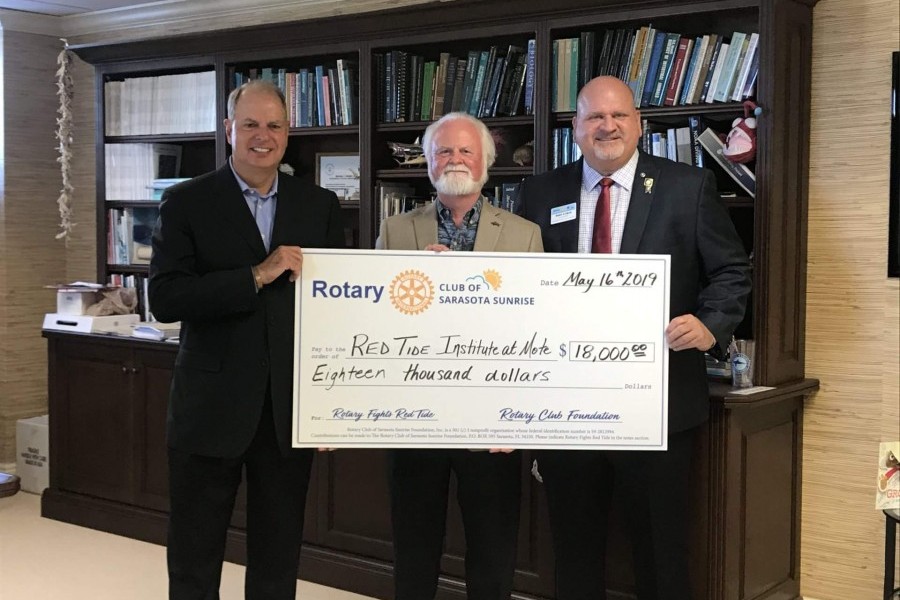 In February, Rotarians from the greater Sarasota area came together to host the Rotary Fights Red Tide gala at Mote Marine Laboratory & Aquarium. Following the success of the event, the Rotary Club of Sarasota Sunrise presented Mote President & CEO Dr. Michael P. Crosby with $18,000 to support the Red Tide Institute at Mote. The Institute serves as a hub of intensive research and development focused exclusively on advancing promising technologies for controlling and mitigating red tide impacts toward practical application.

A “Florida red tide” is a bloom of higher-than-normal concentration of a naturally occurring, microscopic algae called Karenia brevis, often abbreviated as K. brevis. It produces brevetoxins — a type of neurotoxin — that can kill marine animals and cause harmful effects in humans. Red tide blooms form many miles offshore, and when wind and water currents bring them near the coastline, they can cause respiratory irritation among beachgoers, especially those who have underlying lung diseases.

Mote's red tide research involves everything from understanding how humans are affected when they're exposed to airborne brevetoxins to discovering how and why red tide blooms form and why they eventually break down. Mote red tide research is often conducted in partnership with other nongovernmental and governmental agencies in order to maximize research funding. This research has led to the creation of new technologies that help identify and monitor toxic substances in the environment and a better understanding of the organisms that produce them. It has also led to new strategies to help humans deal with negative impacts caused by these toxins.

About Rotary Club of Sarasota Sunrise: Rotary is a worldwide Community Leadership organization and through those leadership connections Rotarians perform service around the world.  Clean water is one of the six core areas of focus for Rotary.  Local Rotarians believe supporting science-based solutions that Mote is performing is key to find actionable outcomes that all community members can implement. Learn more at rotarysarasotasunrise.org