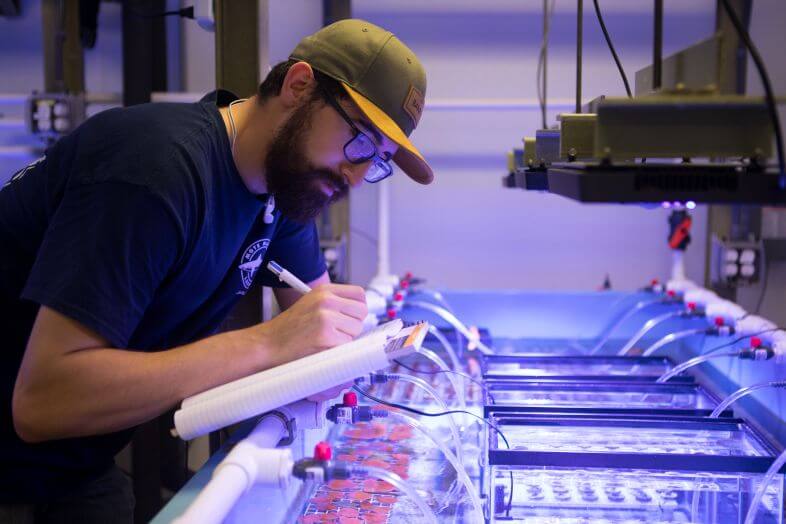 With strategic support from the Jacksonville, Florida-based Arthur Vining Davis Foundations, Mote Marine Laboratory & Aquarium is continuing to push forward with its vital coral research and restoration initiative. As a “Designated Partner” in the Foundation’s new Environmental Engagement, Stewardship, & Solutions grant-making program, Mote will receive significant, two-year support of $250,000 from the Foundations to study resilient corals to be used in restoration efforts.

Corals worldwide, including those on the Florida Reef Tract, face massive threats from climate change, as rising ocean temperatures and decreasing pH levels alter the marine environment that corals are dependent on. Additionally, a devastating Stony Coral Tissue Loss Disease along Florida’s reef is causing mass mortality among over twenty species of corals as the disease stretches from Miami to Key West and beyond.

With this support from the Arthur Vining Davis Foundations, Mote coral scientists will identify resilient coral genotypes and the mechanism behind their resiliency, and anticipate the effects of various climate scenarios on individual species of coral and entire reef ecosystems. These and other findings help to ensure that outplanted corals have the highest chances of surviving future environmental conditions. Mote is one of the only marine research organizations focusing simultaneously on all three major threats to coral species: coral disease, rising water temperature and changes in pH.

“Our coral reefs are on the verge of slipping into functional extinction, suffering from a variety of environmental factors. We are grateful for support from the Arthur Vining Davis Foundations to ensure that our dedicated scientists are positioned to help the Florida Reef Tract with science-based solutions,” said Dr. Michael P. Crosby, Mote President & CEO. “With the creation of the Environmental Engagement, Stewardship & Solutions grants program, the Foundations are tackling environmental issues strategically and with a genuine focus on real impact.  Mote is proud to be an inaugural grant recipient in this new program.”

Past support of Mote from the Foundations included preserving a different type of resource – scientific knowledge. In the mid-1970s, the Foundation supported Mote’s move to its present location on City Island with a grant to name the Arthur Vining Davis Library & Archives. More recently, the Foundations provided a 2012 grant to preserve the library’s special collections, with some documents dating back to the 1920s.

Mote is grateful for the Foundations’ leadership and vision and thrilled to be working in partnership to affect real change.