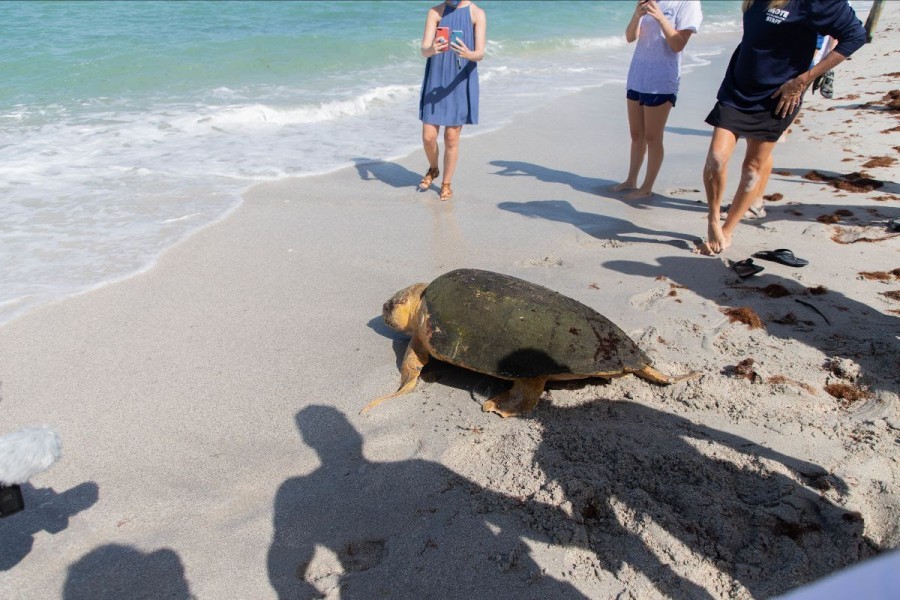 Two sea turtles have been returned to the Gulf of Mexico after recovering at Mote Marine Laboratory's Sea Turtle Rehabilitation Hospital. The turtles were released on July 8 on Casey Key near a private residence.

The first to be released was a juvenile green sea turtle juvenile, nicknamed "Hookee". Aptly named, Hookee was accidentally caught by a fisherman on June 20, 2020 in Englewood, Florida.  The fisherman immediately called Mote's 24/7 Stranding Investigations Program hotline and held the turtle until the team arrived. After being transported to Mote's Sea Turtle Rehabilitation Hospital, Hookee underwent surgery to remove the hook from its esophagus. In total, Mote staff cared for Hookee for 18 days before release.

Next up was a far bigger turtle, Joyce, an adult female loggerhead sea turtle. Originally reported swimming erratically by a member of the public, Joyce has been recovering at Mote's hospital since March 27, 2020. It took several months for Joyce to begin foraging on her own and become less buoyant.

The successful rescue, rehabilitation and release of both Hookee and Joyce stress the important role that private citizens can play in aiding local wildlife. If you see a distressed or deceased sea turtle, manatee, dolphin or whale in Sarasota or Manatee counties, report it to trained responders immediately. Contact Mote’s Stranding Investigations Program via their 24-hour hotline at 888-345-2335. Below are additional tips: