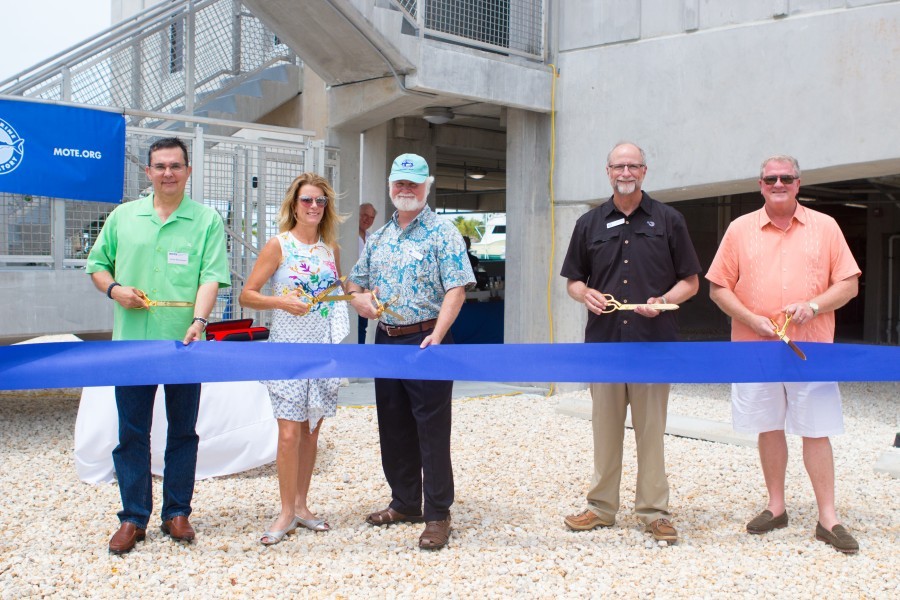 The first-year anniversary of Mote’s state-of-the-art facility in the Florida Keys, the Elizabeth Moore International Center for Coral Reef Research & Restoration (IC2R3), is cause for celebration. Opened in May 2017, IC2R3 exemplifies Mote’s vision as an international leader of marine research programs supporting conservation and sustainable use of marine biodiversity, healthy habitats and natural resources. As a worldwide leader of coral reef research and restoration, Mote is utilizing the new facility at its long-standing Summerland Key campus to  scale up coral out-plantings and  advance  important coral reef research programs on global changes such as ocean acidification (OA).

The new facility, built to withstand Category 5 hurricanes, was put to the test in 2017 when Hurricane Irma blew through the Keys. IC2R3 stood strong and protected Mote’s coral gene bank to support future restoration.

Mote President & CEO Dr. Michael P. Crosby said, “Mote’s new IC2R3 is a significant game changer for coral reef research and restoration in Florida and around the world.  From implementing the first large-scale, science based coral restoration initiative of its kind to sheltering nursery-raised corals during a major Category 4  hurricane, IC2R3 has allowed us and our partners to accomplish so much in its first year.  We continue to expand our critical mass of intellectual energy and innovation by adding new staff such that Mote now has grown from five staff in Monroe County to 22, and we're evolving roles and responsibilities to optimize our positive impact. 2018 is shaping up to be a very productive and exciting year and the future is indeed bright for coral reefs. It’s important that we celebrate our successes while remaining laser focused on conducting innovative research, engaging education and outreach, and restoration of our coral reefs in the Keys and around the world.”

Post-Irma Progress
While Irma swept through the Keys, creating a wide path of destruction, IC2R3 held strong under Irma’s eye, protecting a critical seed bank of corals for restoration. The exterior infrastructure, such as coral raceway systems, was significantly impacted. Most raceways have been repaired and/or replaced, and the local facilities team is in the final stages of completing an OA (ocean acidification) indoor dry laboratory and an expanded outdoor laboratory with a system twice as large as, and technologically superior to, the pre-Irma systems, allowing for larger sample sizes and stronger experimental designs leading to increasingly rigorous statistical analytics.

In November, IC2R3 became the first LEED Gold Commercial-certified facility in Monroe County, recognized by the U.S. Green Building Council for its sustainable design and construction. “We planned for this facility to embody our ocean-friendly, planet-friendly mission — that was our vision from day one,” said Crosby. With such a large, sophisticated research and science education facility as IC2R3 that is jammed with 21st Century technology, Crosby assigned two full time staff to ensure smooth facilities operations, and promoted Brian Richard from Maintenance Technician to Maintenance Supervisor at IC2R3 to ensure these standards are upheld.

Research Advances
In 2017, Mote scientists authored or co-authored several peer-reviewed studies useful for understanding the challenges facing corals. For example, a controlled lab study led by Mote and published June 1 in the peer-reviewed journal PLOS ONE revealed that black band disease was less deadly to mountainous star coral (Orbicella faveolata) as water acidified, or decreased in pH in the lab. Mote co-authors contributed to published studies focused on a crucial restoration species, staghorn coral, including its genetics, population structure and restoration benchmarks.

Also in 2017, Mote and Eckerd College researchers finished the first round of an ocean acidification and temperature study with Aiptasia sea anemones (a model system to better understand how changing conditions affect corals), and have since worked to process the results. They will continue their lab work on this topic during summer and fall 2018.

Mote Staff Scientist Dr. Erinn Muller received a National Science Foundation Early Concept Grant for Exploratory Research award for two years of research with University of Texas and University of Virgin Islands scientists aimed at better predicting how corals react to disease exposure and how that will influence the coral community of the future.

New Staff & Restructuring of Responsibilities
Now, with 19,000 square feet of new space including eight state-of-the-art technology laboratories, IC2R3 has welcomed several new staff, including next-generation Ph.D. scientists. Two new Postdoctoral Research Fellows joined Mote and are in the process of ramping up their research programs: Dr. Rob Nowicki and Dr. Heather Page. Nowicki is a marine ecologist interested in the community relationships between species that can influence coral health and restoration efforts. Page is developing a research program to study OA effects on three key “players” of coral reefs in Florida and throughout the Caribbean – corals, seaweeds and sponges. The presence of both Nowicki and Page demonstrates progress toward a key goal in Mote’s 2020 Vision & Strategic Plan: to attract and nurture the next generation of the best and brightest minds in marine science through the Mote Postdoctoral Research Fellowship program.

In April, Dr. Hanna Koch also began working at IC2R3, thanks to a German research foundation that provides research fellowships to early career researchers who are interested in conducting their own research project in another country for two years. Koch comes to Mote from Max Planck Institute where she was a Postdoctoral Fellow and will be studying the heritability of resilient traits in corals and how to apply that knowledge thoughtfully in restoration.

Dr. Abigail Clark also joined the IC2R3 team as a Staff Biologist. She oversees set-up and management of the facility’s molecular biology and microbiology laboratories, in order to facilitate and expand coral reef research by Mote scientists, visiting scientists and students. Each year, Mote’s Summerland Key facilities have served hundreds of scientists and students from more than 60 different institutions worldwide who are working to understand, restore and protect coral reefs, and Mote scientists aim to welcome even more.

Dr. David Vaughan, Manager of Mote’s Coral Reef Restoration Program, will redouble his valiant efforts to help Mote plant one million corals back onto the reef before he retires. To provide him with more time to develop the massive scale-up efforts to complete this goal, Dr. Vaughan requested that he be allowed to step away from his role of Executive Director of IC2R3 effective April 1 to focus more directly on his restoration program. “My vow to help Mote plant one million corals is more significant now than ever,” Vaughan said. “Our efforts to scale up have been successful to date, and now my exclusive focus can be accomplishing this feat.”

“Dave is a visionary and a conservation pioneer of our time,” Crosby said. “His legacy in coral restoration will be revered as nothing short of miraculous. We look forward to celebrating our joint success in completing this incredible goal of 1 million corals restored in the near future. This past year, he was awarded the prestigious Parker/Gentry Award from the Field Museum in Chicago, which recognizes an individual, team or organization whose work has made a significant impact on conservation and serves as a model for others. Dr. Vaughan has done, and continues to do, just that.”

Dr. Erinn Muller, Program Manager of the Coral Health & Disease Program at Mote, has been appointed to take on the additional role of Science Director for IC2R3. In this newly created role, she will strengthen the current coral reef research and restoration programs at IC2R3 while representing and fostering Mote’s vision and mission globally. “I have huge shoes to fill with this (newly created) role," Muller said. "I am honored to be appointed by Dr. Crosby to this leadership role for overall scientific operations of the facility, and look forward to facilitating coordination of diverse research of resident and visiting scientists who conduct studies here. Together, we will all contribute to achieving our shared goal of 1 million corals planted in the Florida Keys.”

New hire Allison Delashmit joined Mote as the Community Relations Manager for the Florida Keys early this year. Delashmit is working with the local community to bring awareness of Mote’s research and conservation efforts happening in their marine "backyard." Delashmit serves as the local liaison between IC2R3 to Mote’s Community Relations & Communications team in Sarasota, streamlining brand communications and coordinating community events. Delashmit has now been appointed to a new and additional role as the IC2R3 Administration Manager, tending to and supervising the day-to-day administrative operations duties of the Summerland facility.

Major Support
Mote’s science-based coral reef restoration initiative for the Florida Keys received major support in the State of Florida budget signed by Governor Rick Scott in March. A total of $500,000 was appropriated by Florida’s legislators and approved by the governor for Mote’s Coral Reef Restoration Initiative, in coordination with the Florida Fish and Wildlife Conservation Commission and Department of Environmental Protection.

Mote has also recently completed its second year of collaboration with Florida Keys Community College. This education-focused partnership benefits students, faculty and scientists while enhancing Keys-based research and restoration of marine resources such as coral reefs and water quality. Mote has used this exciting opportunity to introduce more undergraduate students to the cutting-edge marine science at Mote’s research facility on Summerland Key and share research and education facilities and infrastructure.

In late March, Mote hosted a second coral workshop at IC2R3. During this week-long workshop, participants received hands-on intensive training in Mote’s signature coral fragmentation process, along with knowledge about coral larval settlement and survival in a land-based nursery and proper monitoring of outplanted coral. The workshops, led by Vaughan, included participants from around the world that were interested in conducting similar restoration projects.