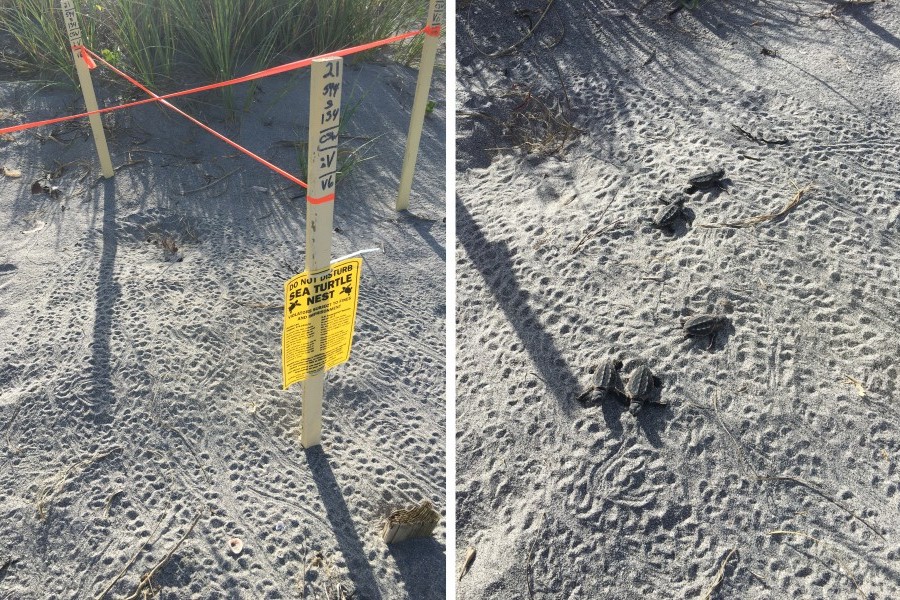 They’re here — the first local loggerhead sea turtle hatchlings of the 2018 season were documented Thursday, June 28, from one nest on Venice and one on Longboat Key, by Mote Marine Laboratory’s Sea Turtle Patrol.

The hatchlings’ tracks suggested that these baby sea turtles made the trek from the nest to the water without being impeded by obstacles or disoriented by artificial lights on the beach. As sea turtle nests will continue to hatch throughout the rest of nesting season, May 1-Oct. 31, it’s important that beachgoers take precautions to protect them, especially during the Fourth of July.

“The biggest thing to remember on the Fourth of July is to make sure everyone picks up their belongings and their trash after they’re done on the beach,” said Melissa Bernhard, Senior Biologist at Mote. “Items left out on the beach can pose hazardous obstacles to sea turtles and their young, because the turtles can ingest them or get entangled.”

This is the 37th year that Mote’s Sea Turtle Conservation and Research Program has monitored nesting along 35 miles of beaches from Longboat Key to Venice, with Longboat Key Turtle Watch monitoring northern Longboat Key under Mote’s state permit. During more than three decades, staff, volunteers and interns have protected an estimated total of more than 2.4 million loggerhead, green and Kemp’s ridley sea turtle hatchlings.

Through the end of southwest Florida’s sea turtle nesting season, Oct. 31, please follow these tips to be a turtle-friendly beachgoer:

On Longboat Key through Venice, beachgoers should wait until at least sunrise to set up furniture or equipment. This will allow any new turtle crawls and nests to be documented by Mote scientists. If you see turtle tracks not yet documented by Mote (documented tracks are crossed out with an "X" in the sand), please avoid placing furniture on them and call Mote's Turtle Patrol at 941-388-4331 to report their location. Tracks marked with small flags have been found by Mote volunteers but are awaiting documentation.

Dogs are not allowed on Sarasota County beaches other than Brohard Paw Park in Venice, where they must be leashed or under voice control, according to county ordinances.