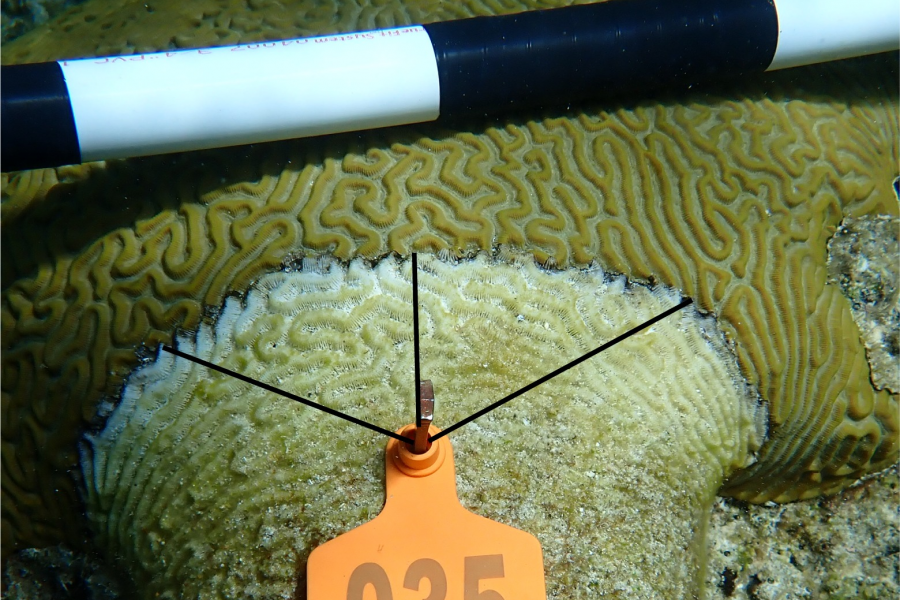 Disease progression measurements are collected from corals with active BBD and shown in new peer-reviewed research.

Mote Marine Laboratory & Aquarium teamed up with the National Park Service and pharmaceutical scientists at Ocean Alchemists LLC to develop treatments for black band disease (BBD), a lethal coral disease, which will contribute to the management of infectious coral diseases and aid in restoration efforts.

In the new peer-reviewed research, A highly effective therapeutic ointment for treating corals with black band disease, scientists test and treat BBD,  one of the first and most prevalent coral diseases reported on reefs worldwide with a multitude of potential therapeutic agents. BBD is visually described as a dark band that progresses across healthy coral, leaving behind bare skeleton.

The research reports that although BBD is seen globally, it is consistently documented on shallow water reefs in the Caribbean region. This disease infects more than 42 species of Caribbean corals, and although the prevalence and virulence peaks during the summer months, it can be observed affecting corals year-round making it an ongoing threat to this habitat’s overall health.

A total of 13 different possible treatments were tested on Pseudodiploria spp., a genus of stony brain coral, with active BBD lesions at Buck Island Reef National Monument in St. Croix, USVI. Two antiviral/antimicrobial-based ointments, referred to as “CoralCure”,slowed the progression of lesions and completely eliminated the disease within affected corals. These corals also remained healthy at least 6 months after treatment. This is the first study to use natural product extracts as the primary active ingredient and shows the potential for 100% treatment efficacy of a worldwide coral disease. This research reveals there are novel ways to manage and treat BBD with the use of these therapeutic agents, which will be useful in containing outbreaks to ultimately preserve coral biodiversity.

“Developing medicines for corals gives us the critical tools we need to save corals sick with infectious diseases helping to preserve an ecosystem on the brink of collapse,” said Muller. “Managers and scientists can use these tools to treat iconic corals, develop treatment plans to preserve a particularly threatened reef, and mitigate loss of restored reefs during disease events.”

“The results reaped from this study stand as an excellent example of how collaboration between two seemingly distant fields of research can combine to create something far greater than the sum of their individual parts.” -Michael Favero CSO of Ocean Alchemists LLC