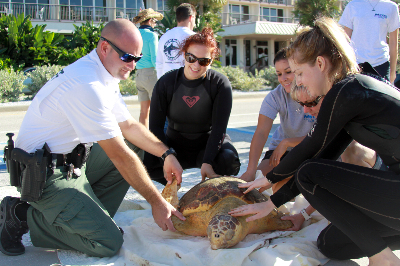 Two loggerhead sea turtles rehabilitated by Mote Marine Laboratory were returned to the wild Friday, Dec. 5, from Lido Key. During the release, Mote caregivers were joined by a group of well wishers, including a local law enforcement officer who helped rescue one of the turtles.

Loggerhead sea turtles “Al” and “Kalani” stranded during summer 2014 and were treated at Mote’s Sea Turtle Rehabilitation Hospital for lethargic loggerhead syndrome — a condition caused by blood parasites that can leave sea turtles listless and vulnerable to predators and other dangers. Mote's Sea Turtle Rehabilitation Hospital has treated more than 450 patients since 1995. All sea turtles are threatened or endangered species protected by federal law.

Al, a 93-pound (41 kg) turtle, stranded on Aug. 18 off Turtle Beach, Siesta Key. Al was discovered by, and later nicknamed for, Sarasota County Sherriff’s Deputy Eric Alvarez. Alvarez spotted the turtle while on marine patrol and he immediately called Mote’s Stranding Investigations Program — a 24-hour response service for distressed sea turtles and marine mammals in Sarasota and Manatee counties. Mote staff joined Alvarez on his boat to recover the turtle.

Kalani, a 188-pound (85 kg) turtle, stranded on July 17 in Boca Grande. A member of the public reported the turtle to state wildlife officials, who designated a volunteer to bring the turtle to Mote.

During Friday’s release, Deputy Alvarez joined Mote caregivers to say goodbye to Al. “It has been an amazing experience from the rescue to the release,” said Alvarez, who has alerted Mote to multiple stranded marine animals through his work as a marine patrol officer. “I have Mote on speed dial. It’s part of our job to conserve wildlife, and it’s great that we can work together with Mote to do that successfully.”

Both turtles made a full recovery and returned to sea with plenty of vigor. Al — known as the feistier of the two — looped back along the beach a few times before heading out into the waves. Kalani made a beeline out to sea.

“Both of the turtles made an excellent recovery and it was great to see them return to the wild,” said Dr. Abe Robinson, Marine Veterinarian at Mote. “They each had their own way of doing things on the beach — Kalani was right on target, Al needed a little help from our team, and soon they both successfully got their ‘sea legs.’ Their release is a testament to our great animal rescue and rehabilitation team, and to everyone in the community who has supported our work. We thank Deputy Alvarez and all those who continue to help us to help these animals.” 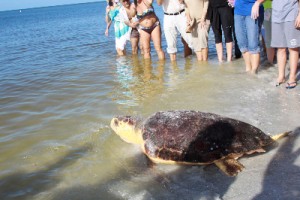