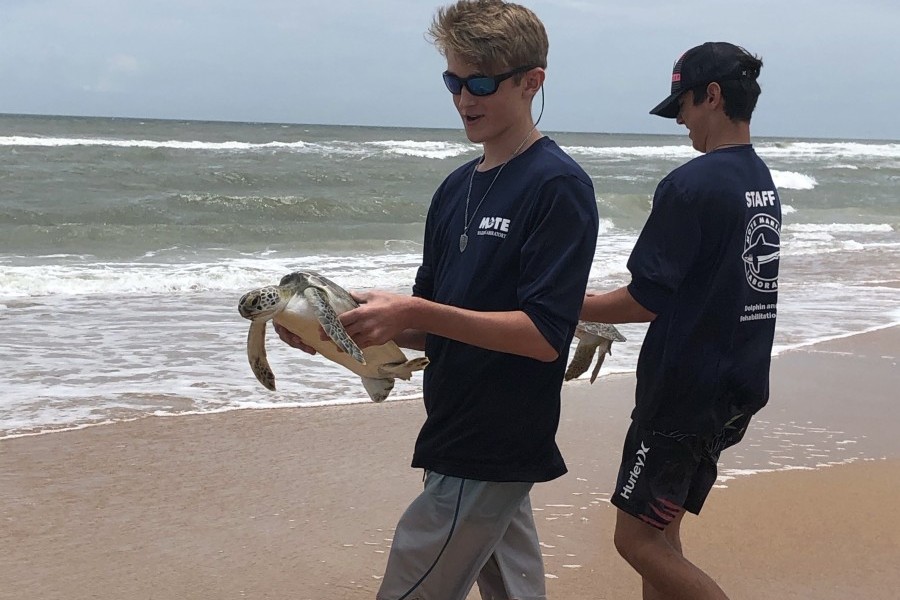 Mote Marine Laboratory & Aquarium said “sea-yonara!” to seven green sea turtles who have been in our care for months following a transfer from east coast facilities. The juvenile turtles were released on June 7th, 2021, from Flagler Beach.

All the turtles were found on the east coast of Florida and due to a lack of space were transferred to Mote’s Sea Turtle Rehabilitation Hospital. Here they received treatment for cold stress, a potentially fatal disorder to sea turtles. Cold stress causes the body functions to slow down, leaving it susceptible to predators and boat strikes it also makes the turtle highly susceptible to a buildup of algae and bacteria on their shells.

After being cleared for release, all seven of the turtles were given a final physical checkup and were implanted with a PIT (passive integrated transponder) tag. This allows the animal’s basic information and past medical history to be viewed if they become stranded again.

The nicknames of the turtles released today were Bumble, Brewer, Molasses, Looe, Howe, Raja, and Kimbe. Bumble has been a resident of Mote since October of 2020, spending over 200 days in our care before finally being cleared for release into the big, blue ocean. Read more about each patient, and the other's remaining in Mote's care, at mote.org/hospital.