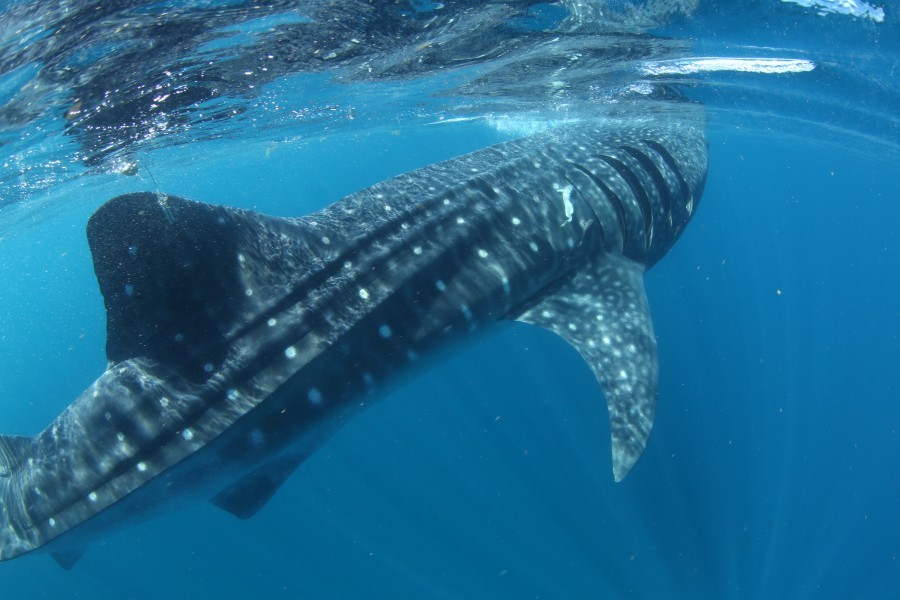 In 2007 scientists from Mote Marine Laboratory and Ch’ooj Ajauil AC placed a location-tracking tag on a whale shark nicknamed "Rio Lady" and documented her epic migration spanning close to 5,000 miles. Now, Rio Lady is back in the scientific spotlight, being tracked by our colleagues at Nova Southeastern University's (NSU) Guy Harvey Research Institute and Ch’ooj Ajauil AC. The Mote team is pleased to share their story about the next chapter of Rio Lady's journey. 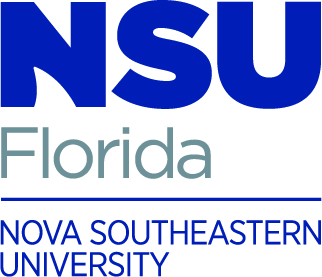 FORT LAUDERDALE/DAVIE, Fla. – For humans, the concept of social distancing is really just a few months old. But for a certain whale shark, it’s something she had been practicing for many years.

“Rio Lady,” a mature, 26-foot whale shark tagged in 2018, has been tracked by research scientists at Nova Southeastern University’s (NSU) Guy Harvey Research Institute and Ch’ooj Ajauil AC for nearly 20 months, making this the longest, high-resolution position track for this globally endangered species. But this wasn’t the first time she was tagged by researchers.

Eleven years prior and with support from Georgia Aquarium, scientists from Mote Marine Laboratory and Ch’ooj Ajauil AC’s Executive Director Rafael de la Parra first tagged her in August 2007 in the Gulf of Mexico near Isla Mujeres, Mexico, where whale sharks annually aggregate to feed. Based on her ample girth, the researchers suspected the shark was pregnant. At that time, the researchers used a pop-up satellite tag, and as the name implies, the tag “popped up” about five months later and nearly 5,000 miles away in the southern Atlantic Ocean, near the Rocks of Saint Peter and Saint Paul between the African continent and Brazil. This led de la Parra to nickname her Rio Lady.

She wasn’t seen again until the summer of 2011.

“After the original tag came off, she kind of just went dark,” said Mahmood Shivji, Ph.D., a professor in NSU’s Halmos College of Natural Sciences and Oceanography and the director of NSU’s GHRI. “Talk about social distancing – she kept her distance for nearly four years. What’s also interesting is that Rio Lady’s new track is strikingly different from her travel path after she was first tagged in 2007. Her recent 20-month journey shows she travelled through the national waters of at least five countries in the Caribbean and Gulf of Mexico, making you wonder where else she explored in the years she wasn’t tracked.”

After she was first tagged, her long trek while pregnant to the middle of the Atlantic made this whale shark a media celebrity.

“Rio Lady immediately became a superstar for her species,” said Mote’s Robert Hueter, Ph.D., lead scientist of the research in 2007. “She gave us a major clue about where whale sharks may be giving birth to their young, in offshore waters of the open ocean far from their nearshore feeding grounds.” 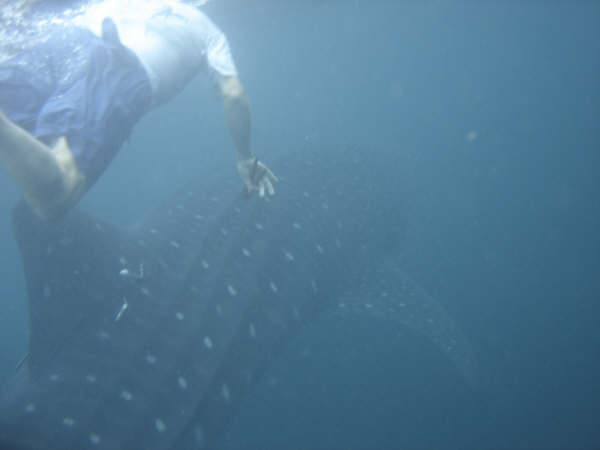 Rio Lady ditched her social distancing in 2011, reappearing annually at the Mexico aggregation site from 2011 to 2018. Then in August 2018, de la Parra, working on a collaborative project with NSU GHRI scientists, tagged her in almost the exact location where she was originally tagged. This time, the researchers affixed a higher resolution Smart Position and Temperature (SPOT) satellite tag to Rio Lady’s fin, obtaining more accurate positions of her locations from this tag.

“Rio Lady’s tag information has given us better insight into where whale sharks go, for how long and other factors that can contribute to our understanding of these gentle giants,” said Dr. Alistair Dove, vice president of research and conservation at Georgia Aquarium. “Our research on whale sharks spans more than 15 years and it’s always an achievement when we have new data to help us make informed decisions about where to look next or questions that still need answers.”

Since her second tagging, Rio Lady’s journey has been remarkable. She has traveled more than 9,621 miles in more than 600 days, which has included long forays into the Caribbean, the Gulf of Mexico and even a brief stop last month near the coast of Apalachicola in the Florida Panhandle. In 2020, she was tracked until February 15, when she “social distanced” herself for two months before resurfacing again last month in the Gulf of Mexico.

Researchers have learned over the years that while whale sharks mostly travel solo, there are times they gather in large numbers in feeding aggregations. While Rio Lady is still practicing her usual social distancing, thanks to technology, scientists are able to keep tabs on her in order to learn more about this amazing species.

Whale sharks are the largest fish in the sea, which along with mako sharks, tiger sharks, oceanic whitetips, sand tigers, smooth hammerheads and more are monitored at NSU’s GHRI as part of ongoing research of the marine ecosystem. The GHRI studies many aspects of shark-life, from migratory patterns to their genomes, in order to protect these animals for future generations. An endangered species, whale sharks are harvested for their fins, oils, meat and more and can also fall victim to ship strikes during their migrations.

The trek of Rio Lady and other sharks NSU’s GHRI researchers have tagged can be found at nova.edu/sharktracking.

Be sure to sign up for NSU’s RSS feed so you don’t miss any of our news releases, guest editorials and other announcements. Please sign up HERE. You can also follow us on Twitter @NSUNews.

About Nova Southeastern University (NSU): At NSU, students don’t just get an education, they get the competitive edge they need for real careers, real contributions and real life. A dynamic, private research university, NSU is providing high-quality educational and research programs at the undergraduate, graduate, and professional degree levels. Established in 1964, the university includes 16 colleges, the 215,000-square-foot Center for Collaborative Research, a private JK-12 grade school, the Mailman Segal Center (early childhood education) with specialists in Autism, the world-class NSU Art Museum Fort Lauderdale, and the Alvin Sherman Library, Research and Information Technology Center, one of Florida’s largest public libraries. NSU students learn at our campuses in Fort Lauderdale, Fort Myers, Jacksonville, Miami, Miramar, Orlando, Palm Beach, and Tampa, Florida, as well as San Juan, Puerto Rico, and online globally. Classified as having “high research activity” by the Carnegie Foundation for the Advancement of Teaching, NSU is one of only 50 universities nationwide to also be awarded Carnegie’s Community Engagement Classification, and is also the largest private institution in the United States that meets the U.S. Department of Education’s criteria as a Hispanic-serving Institution. Please visit www.nova.edu for more information.

About NSU’s Guy Harvey Research Institute (GHRI): Established in 1999, NSU’s Guy Harvey Research Institute (GHRI) is a collaboration between the renowned marine artist, scientist and explorer, Dr. Guy Harvey, and Nova Southeastern University’s Halmos College of Natural Sciences and Oceanography. The mission of NSU’s GHRI is to provide the scientific information necessary to understand, conserve, and effectively manage the world’s marine fishes and their ecosystems. It is one of only a handful of private organizations dedicated exclusively to the science-based conservation of marine fish populations and biodiversity. The research, education and outreach activities of NSU’s GHRI are supported by the Guy Harvey Ocean Foundation, Intradeco, extramural research grants, philanthropic donations by private businesses and individuals and NSU.  Please visit  nova.edu/ocean/ghri/index.html for more information.

About the Guy Harvey Ocean Foundation (GHOF): The Foundation conducts scientific research and hosts educational programs aimed at conserving the marine environment. The GHOF also funds affiliated researchers working to better understand our ocean ecosystem and educators helping to foster the next era of marine conservationists. The GHOF is helping ensure that future generations can enjoy and benefit from a properly balanced ocean ecosystem. Please visit www.ghof.org for more information.

About Georgia Aquarium: Georgia Aquarium is a leading 501(c)(3) non-profit organization located in Atlanta, Ga. that is Certified Humane by the American Humane Association and accredited by the Alliance of Marine Mammal Parks and Aquariums and the Association of Zoos and Aquariums. Georgia Aquarium is committed to working on behalf of all marine life through education, preservation, exceptional animal care, and research across the globe. Georgia Aquarium continues its mission each day to inspire, educate, and entertain its millions of guests about the aquatic biodiversity throughout the world through its hundreds of exhibits and tens of thousands of animals across its seven major galleries. For more information, visit www.georgiaaquarium.org

About Mote Marine Laboratory & Aquarium: Mote Marine Laboratory & Aquarium, based in Sarasota, Florida, has conducted marine research t since its founding as a small, one-room shark laboratory in 1955. Since then, Mote has grown to over 20 research and conservation programs that span the spectrum of marine science: aquaculture systems that alleviate growing pressures on wild fish populations; red tide research that works to inform the public and mitigate the adverse effects of red tide with innovative technologies; marine animal conservation and rehabilitation programs that protect animals such as sea turtles, manatees, and dolphins; and much more. Mote Aquarium, accredited by the Association of Zoos & Aquariums, is open 365 days per year. Learn more at mote.org or connect with @motemarinelab  on Facebook, Twitter, Instagram, YouTube, and more.