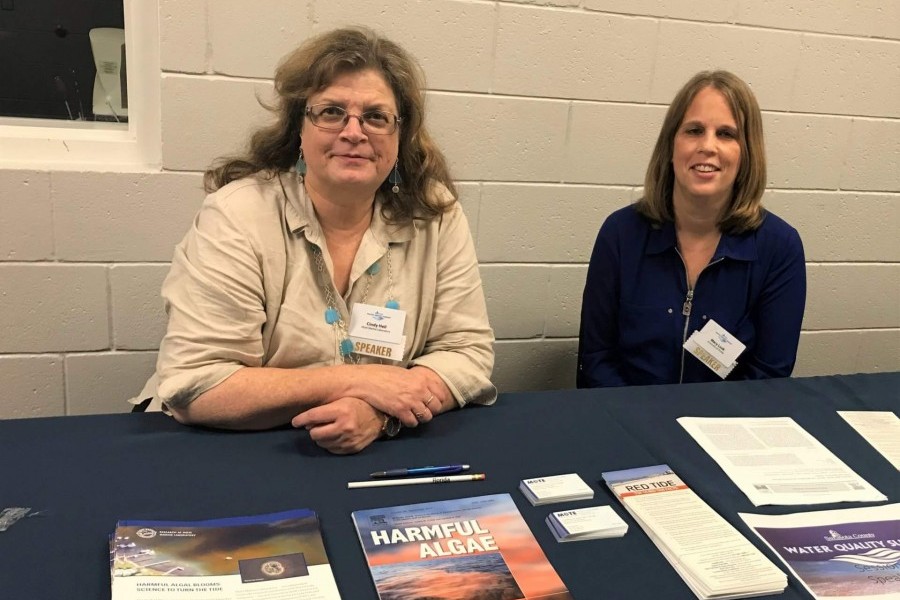 Dr. Cindy Heil, Director of the Red Tide Institute at Mote Marine Laboratory, shared decades of research on Florida red tides (blooms of Karenia brevis algae) and the nutrients that can support them, during a panel discussion on water quality science. The panel was moderated by David Shafer, Co-Executive Director of the Science and Environment Council of Southwest Florida, and featured additional speakers Steve Suau, Principal of Progressive Water Resources, Mike Mylett, Interim Director of Sarasota County Public Utilities, and Mary Lusk, Assistant Professor at University of Florida.

“We’ve identified over 13 different sources of nutrients that Florida red tide is capable of using, from when it forms offshore through when it moves to the coast, and we have quantified these sources,” Heil said. “The sources vary with the stage, age and location of a red tide bloom, so at any given time, looking at them is a complex endeavor. Regardless, reducing human-contributed, nearshore nutrients should be implemented for the health of our environment and economy. This might reduce red tide severity locally, but it is not expected to stop red tide entirely.”

Heil explained the possible reasons that Florida red tides naturally tend to form offshore of southwest Florida, more frequently than in other areas of the Gulf of Mexico. Reasons may include suitable habitat — the wide and shallow West Florida Continental Shelf — relatively little competition from other life forms offshore, and the presence of offshore nutrient sources including other life forms that “fix” nitrogen from the air into a form K. brevis can use. When ocean circulation patterns move Florida red tides to the coast, they can access additional nutrient sources — both natural sources and those augmented by humans through fertilizer runoff, septic system leaks, pet waste, yard clippings and other means.

In Florida’s freshwater systems, human-contributed nutrients can cause blooms of blue-green algae (cyanobacteria) such as the Microcystis blooms in Lake Okeechobee and its outflows that drew attention in 2018, when they coincided with a major Florida red tide bloom in the Gulf of Mexico. Could the Microcystis, when carried to sea, have provided any nutrients to Florida red tide in the ocean?

“Karenia (Florida red tide) doesn’t consume Microcystis — actually Microcystis competes with Karenia for nutrients,” Heil said. However, she noted: “Our research suggests that a small part of last summer’s red tide bloom could have been supported by decay of the Microcystis bloom coming from the Caloosahatchee, which flows from Lake Okeechobee.”

Such outflows of Okeechobee water don’t always correlate with bad years of red tide at sea, and they don’t explain why the 2017-2019 red tide bloom was so lengthy and intense. “We don’t’ know why the recent bloom was so bad,” Heil said. “In addition to investigating nutrients, we also need to better understand what role climate change may be playing with red tide.”

Heil is working to understand how Florida red tides work, while simultaneously studying potential methods to directly mitigate them, as director of the Red Tide Institute at Mote. “Mitigation includes red tide prevention, control and relieving the impacts,” Heil said. “Prevention involves finding Karenia offshore at very low concentrations, which is a future goal for which molecular techniques show some promise. Control has more potential today — using biological, physical and chemical methods, ranging from living docks with filter feeding organisms that remove red tide to specific compounds such as clay, ozones and algicides. So far we are testing close to 50 compounds, and a lot of them can kill the algae, but just about 10 percent will also destroy the toxins, which is important.”

A key requirement, Heil notes, is that mitigation tools do no further harm to the ecosystem than red tide has already done.

Heil reiterated that reducing nutrient pollution won’t remove red tide, but it may reduce its intensity locally, and in general “It is always a good thing to reduce your nutrient footprint.”

Panelist Mary Lusk from University of Florida (UF) emphasized that Florida residents have many opportunities to reduce nutrient pollution. To reduce atmospheric nitrogen reaching waterways, residents can increase the porous areas of their yards, including gardens and turf, to allow more rain to soak into the ground. Residents can also maintain a rain garden or rain barrel to harvest and reuse rainwater. By cleaning up and composting leaf litter and grass clippings, residents can reduce these nutrient sources that might otherwise be carried into stormwater systems and into waterways. Picking up pet waste, keeping septic systems in good repair, and using fertilizer in legal and responsible ways are all important steps. The UF IFAS Extension offers fertilizer tips and more.