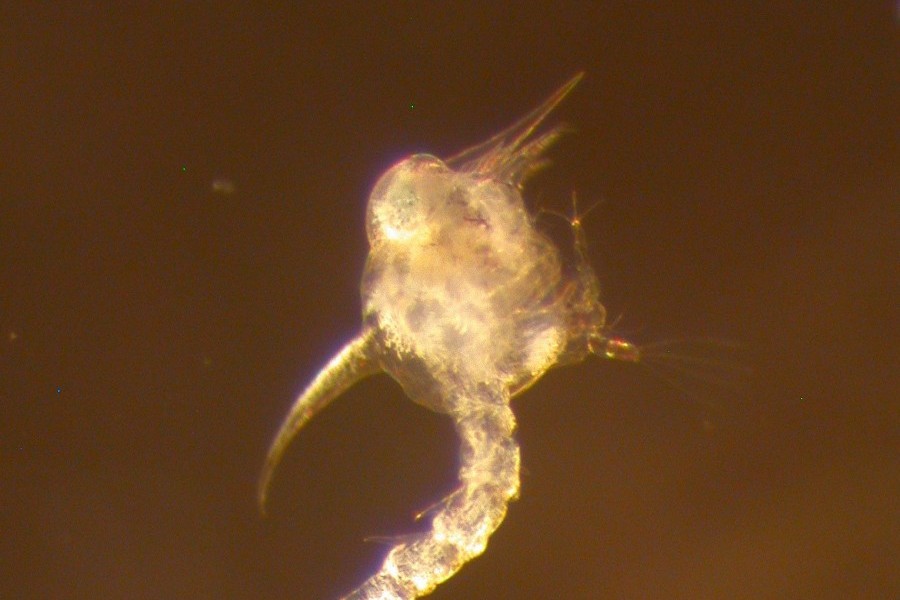 High and medium concentrations of Florida red tide caused 100% and 30% mortality in stone crab larvae, respectively, and many of the surviving larvae had impaired swimming behavior, during a four-day lab study published by Mote Marine Laboratory scientists and partners in the peer-reviewed journal Harmful Algae.

Mote scientists and Pitzer College partners aimed to better understand how newly hatched larvae might be affected by a bloom of Florida red tide (Karenia brevis) persisting into the stone crabs’ summer reproductive season. K. brevis blooms typically occur in the Gulf of Mexico from early fall into spring but can last a year or more — as did the severe bloom from late 2017 into early 2019.

This study is the latest of several Mote projects investigating multiple stressors to stone crabs, with the goal of better understanding the 25% decrease in southwest Florida’s yearly stone crab catch since 2000 and informing resource managers working to help the fishery rebound. The study was supported by grants to Mote from The Steinwachs Family Foundation and The National Science Foundation Research Experiences for Undergraduate program.

“Our previous research suggests that sublegal stone crabs, whose claws are nearing legal harvest size, have a short window of tolerance for elevated concentrations of Florida red tide algae and begin to die off when that window is exceeded,” said Mote Postdoctoral Research Fellow Dr. Phil Gravinese.  “This is one possible way that red tide might reduce the catch rate. Alternatively, severe and prolonged blooms that overlap with the crabs’ summer reproductive season might be reducing the number of offspring, or larvae, that are available to recruit into the fishery.”

Project partners at Mote in Sarasota, Florida, tested the survival of larvae hatched from 15 independent broods of eggs carried by female stone crabs collected from Tampa Bay. They randomly assigned some larvae from each brood to tanks with a toxic strain of K. brevis in high concentrations (1 million or more cells per liter of water) and medium concentrations (about 100,000 cells/liter), assigned others to tanks with a low-toxin strain of K. brevis in high and medium concentrations, and assigned the control group to tanks with seawater only. They monitored how many larvae survived every 24 hours for four days, enough time to collect meaningful data while the larvae all remained in their first larval stage. After hatching, stone crab larvae progress through five larval stages, which take about 30 days total to complete before molting into post-larvae.

In the wild, newly hatched larvae must swim to the surface and ride currents away from shore, out of the reach of many coastal predators. After several stages of development offshore, the post-larval crabs return to settle and grow in coastal estuaries. In the lab study, partners tested how well the larvae could swim to the surface after six hours’ exposure to K. brevis, compared with unexposed larvae. The researchers placed the larvae into a chamber, allowed them to acclimate and then gently turned the chamber 90 degrees; they documented the direction and speed the larvae swam, along with their oxygen consumption.

“We found that Florida red tide toxins, known as brevetoxins, can be lethal to larval stone crabs in their earliest developmental stage, or they can have ‘sub-lethal’ effects that don’t kill the larvae but impede their normal behavior,” Gravinese said. “The severity of these effects appears to depend on the concentration of red tide algae and duration of the exposure.”

Florida red tide can be patchy, but larvae found in a concentrated patch may stay with it, as both are carried by water currents.

Florida red tide blooms initiate 10-40 miles offshore, away from human-contributed nutrient sources. When they move close to shore, they can access both natural and human-contributed nutrients. Development of new technologies to mitigate the impacts of red tide is an important area of applied research that aims to directly reduce or destroy red tide algae and toxins. This year, the new Red Tide Institute at Mote Marine Laboratory was launched with a focus on red tide mitigation research, thanks to its founding donor: the Andrew and Judith Economos Charitable Foundation.

While the Florida red tide alga, Karenia brevis is naturally occurring in the Gulf, it’s still important to attempt reductions of excess nutrients from human activities entering the Gulf of Mexico in order to limit additional “fuel” that may exacerbate red tides along the coast. For example, the Sarasota Bay Estuary Program offers tips for reducing personal nutrient pollution here.

The authors of the new study noted: “The higher survivorship observed among stage-1 stone crab larvae during exposure to medium concentrations of K. brevis suggests that mitigation efforts aimed at reducing the duration or intensity of K. brevis blooms may function to preserve stone crabs harvests in future years.” 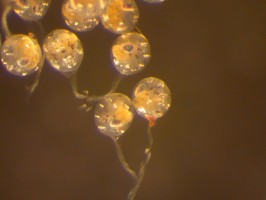 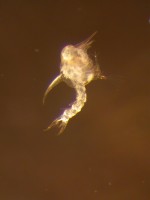 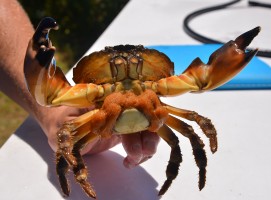