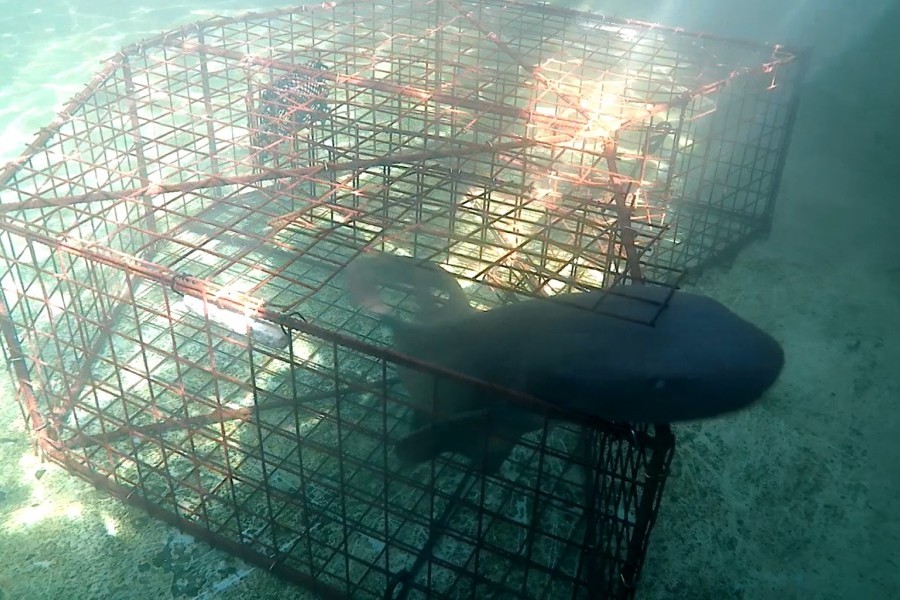 In July 2018, Mote Marine Laboratory scientists and partners from the Dutch Elasmobranch Society (NEV) began investigating how to keep nurse sharks from getting stuck in spiny lobster traps to benefit both species and the lobster fishery.

The Saba bank in the Dutch Caribbean is a shark sanctuary, but the spiny lobster fishery of the Saba bank catches hundreds of nurse sharks a year inadvertently. This nurse shark bycatch can not only increase trap handling time and reduce fleet time efficiency for the fishermen, but nurse sharks can also damage or consume lobster, greatly reducing their value on the market.

“From both an economic and conservation perspective, it's valuable for us to find a way to reduce nurse shark bycatch,” said Mote Postdoctoral Research Fellow Dr. Rob Nowicki. “More generally, by doing the experiment the way we are – recording behavior instead of capture/no capture events – we can understand exactly how the lobsters, sharks, and traps interact with one another. This gives us an additional level of insight that has already proven valuable in pursing trap modifications to reduce bycatch. We hope that these insights might be able to inform other Caribbean fisheries where nurse shark bycatch is an issue in the future.”

The project started late July 2018 and is expected to conclude at the end of the year. Through 173 experimental runs to date, which involved documenting the sharks’ behavior with lobster traps, project scientists have learned much about how sharks and lobsters interact in the traps. Surprisingly, sharks often initially care mostly about escaping the traps, not eating the lobster. “Our original thoughts were that sharks enter traps and essentially treat them as lobster vending machines, but our work suggests that sharks first try and get out, and sometime after they give up the lobsters start to look tasty,” Nowicki said. “This has caused us to pivot objectives and explore how to design a trap that excels not at keeping sharks out, but at letting them escape quickly.  Our preliminary results on this are looking very promising!”

The next steps include finishing data collection and sharing results with the Dutch Government, the NEV, and the fishermen of Saba, with the goal of determining the best ways to implement recommendations. Ideally, Mote scientists hope to conduct later field tests of the traps with video recording to confirm the patterns described in the current onshore experiments.