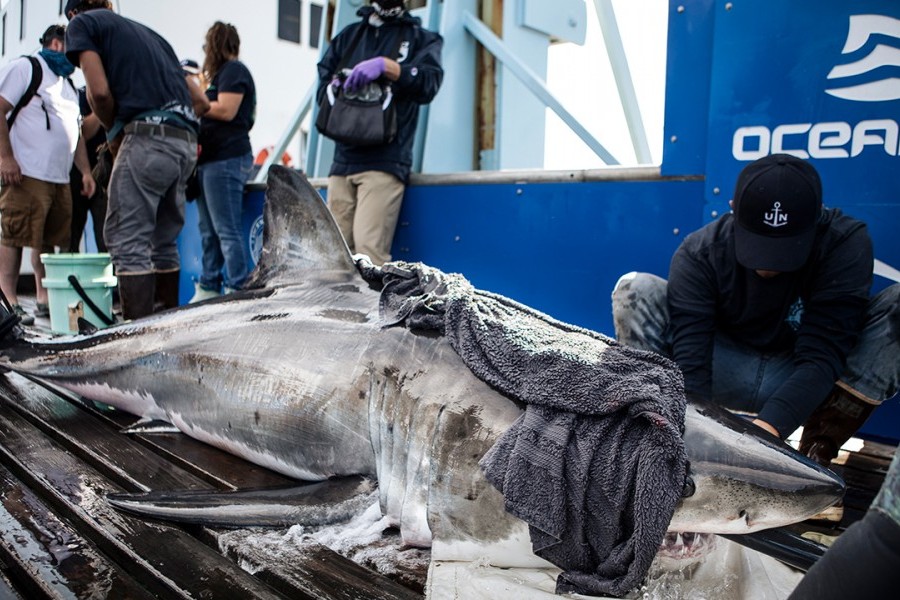 Mote Marine Laboratory Senior Scientist Dr. Bob Hueter is gearing up for his next shark research adventure. Hueter serves as Chief Scientist for the organization OCEARCH, which is undertaking its latest scientific expedition to tag and sample white sharks (commonly nicknamed “great white sharks”)—part of a long term quest to understand the complete life history of these top predators along eastern North America.

The current expedition, in federal waters off Massachusetts, will support 21 individual research projects, 36 scientists and 22 institutions, advancing the scientific understanding of white sharks while open-sourcing all data for public safety programs.

Hueter will soon join the crew, and other expedition participants have already satellite-tagged and sampled four white sharks, naming the first one  “Andromache.”
“Andromache was a good find, a near-mature sub-adult female,” Hueter said. “We'll be able to track her transition to maturity in the next five years. We're starting to get close to pinning down mating areas, by watching these sub-adults enter adulthood and then zing offshore, we think after mating.”

OCEARCH staff note that this 10-foot, 8-inch shark was named after the Greek mythological character Andromache, a symbol of maternity and courage. The science team was able to collect biological samples from Andromache to support multiple research projects before she was safely released.

The next white sharks tagged and sampled were male “Monomoy,” measuring 6 feet 7 inches—the smallest white shark the team has tagged in the area—and male “Beacon,” measuring 8 feet and 6 inches, followed by a 7-foot female that is yet to be named.