Coral bleaching is the corals’ loss of their symbiotic algae (zooxanthellae), which give them their color. Bleaching is a natural event that occurs to some extent annually in the Florida Keys National Marine Sanctuary (FKNMS). Records show that coral bleaching has been occurring for many years in the Florida Keys and also indicate that the frequency and severity of these events has steadily increased since the 1980s. Large-scale mass coral bleaching events are driven by unusually warm sea temperatures and calm seas. The effects of these mass events are potentially devastating to ecosystems and the people who depend on them.

The initial onset of mass coral bleaching can vary among different species, geographic locations, types of reef zones and a fluctuation of severity, which makes it very difficult to predict where or when it will occur.  The Florida Keys BleachWatch Program, modeled after Great Barrier Reef’s BleachWatch, is a team of trained recreational, commercial and scientific divers who help monitor and report on conditions at the reefs.  After each visit to the reef, the divers complete a data form, either printed or online, and send it to the BleachWatch coordinator.   The divers will be provided with an underwater wristband to use as a reference and a reminder key below and above the water.

Due to Florida reefs and portions of the Caribbean reefs experiencing an outbreak of stony coral tissue loss disease (potentially caused by bacteria), BleachWatch observers are also encouraged to also collect data on disease and no disease at their sites.  These observations will help researchers try to understand the range, progression, and species affected.  Please visit The Florida Keys National Marine Sanctuary for more information.

Information from NOAA's Coral Reef Watch (CRW) remote sensing and Integrated Coral Observing Network (ICON) in-situ environmental monitoring analysis are combined with "BleachWatch" volunteer observations in the field to provide a comprehensive overview of "current conditions" throughout the FKNMS. These reports will be generated according to the current conditions and the potential risk for coral bleaching and are listed below: 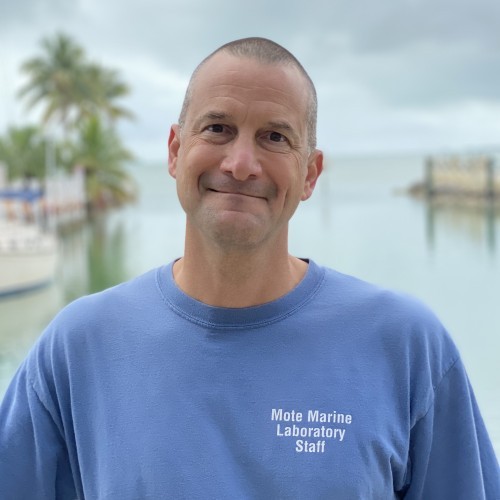 Mote researchers have more than 13,000 colonies of the threatened Staghorn coral growing in their underwater coral nursery, equivalent to more than 6 miles of living coral.