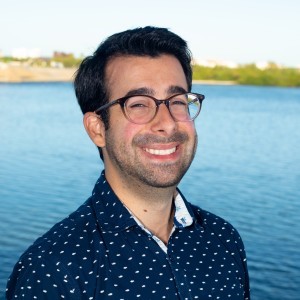 Ross Johnston is from Santa Cruz, California, where he became exposed to marine laboratories from visiting and volunteering at Moss Landing Marine Labs starting from a very young age. Mote Marine Labs is the fifth Association of Zoos and Aquariums (AZA) accredited institution where Ross has worked, previous organizations include the Monterey Bay Aquarium, the Aquarium of the Pacific, the American Museum of Natural History, and most recently as the Conservation Interpretation Manager of the Fresno Chaffee Zoo. Ross’ experience has been in the environmental or conservation education departments throughout his AZA work history, including conservation curriculum development, animal enrichment and feeding narratives, and public programming with the Monterey Bay Aquarium’s “Seafood Watch” and Aquarium of the Pacific’s “Seafood for the Future.” He designed conservation curriculum tailored to strategic environmental stewardship and community development that afforded him the honor of speaking at the 2018 California Sustainability Summit on community-aligned conservation education. As a National Association for Interpretation Certified Interpretative Guide, his professional background has focused on public conservation messaging and scientific program engagement.

Outside his AZA affiliations, Ross has traveled internationally working on marine conservation policy and environmental education programming to engage local communities in ecological stewardship. He has traveled throughout the Caribbean, India, and Micronesia educating on sustainable seafood, marine policy and politics, and socio-environmental intersectionality. During his graduate career at New York University, he was the teaching assistant for Dr. Daniel Pauly’s marine ecology course. His Master’s thesis focused on Magellanic penguin population decline as the indicator species for unsustainable overharvesting of baitfish stocks, for which he received grants to study in Patagonia and present his research findings to Argentina’s Ministry of Environment and Sustainable Development. Additionally, Ross has coauthored nine publications ranging in subjects from environmental policy, species conservation, and resource management.

Ross Johnston will educate the public primarily through SeaTrek.TV interactive video lessons: Mote’s live, two-way virtual connections with schools and other organizations, focused on engaging and educating a range of ages on the Lab’s 60-plus years of marine research.

A Zoo To-Do:  Article 41 and the Conservation Politics of a Conservation Center.* Policy Futures in Education November 2016

Seafood Consumption in the Turks and Caicos Islands and Its Implications for Management and Conservation.* Times of the Islands December 2014

The Unsustainability of Caribbean Gastronomic Heritage: An Insight to Ethnic Tension Created by the Intersectionality and Ethnography of Fishing Cultures.* Brandeis University Undergraduate Environmental Studies Dept. Library May 2014