Trichodesmium, a marine cyanobacterium (blue-green algae) found worldwide in tropical and subtropical waters, blooms every year in the Gulf of Mexico. In southwest Florida, blooms can extend for miles and are visible from space. Occasionally, wind and currents can transport Trichodesmium blooms to the east coast of Florida.

In general, Trichodesmium is not a good food source for other organisms. Only a few specialized animals actively feed on it. Some strains of Trichodesmiumdo produce toxins, but researchers have not documented any negative effects of Trichodesmiumon marine life or people in Florida. 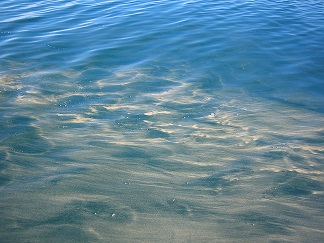 Reports of Trichodesmium blooms date back to the 1700s, when Captain James Cook of the British Royal Navy wrote about large, brown blooms that resembled sandbars. Sailors sometimes refer to Trichodesmium as “sea sawdust” because it forms colonies that can be quite large (up to 1 centimeter) and visible to the naked eye. Small blooms look like sawdust floating on the water surface, whereas larger blooms can look like oil slicks or foamy pollution. The amount of Trichodesmium on the surface may vary with time of day, as this species is capable of moving up and down in the water column.Trichodesmium blooms can appear brown when the bloom is healthy; green when the bloom is starting to decay; pink or red when certain pigments leak out of the cells; or white after pigments decay. Trichodesmium blooms have a sweet smell similar to freshly cut hay when they decay.

In the ocean, the growth of most algae is limited by the amount of nitrogen dissolved in the water. Trichodesmium is unique because it gets most of its nitrogen from the atmosphere. It has specialized structures that allow it to convert nitrogen gas into a usable form of nitrogen, ammonia. This process is called nitrogen-fixation. Because nitrogen fixation is limited by iron availability, new iron introduced into the water will stimulate Trichodesmium blooms. Typically between May and September, iron-rich dust blows from the Sahara Desert in Africa across the Atlantic and settles in the Gulf of Mexico. Blooms usually occur during those months, as Trichodesmium uses this iron to fix nitrogen and grow. Other algae, like the Florida red tide organism, Karenia brevis, can also use the new nitrogen fixed by Trichodesmium.