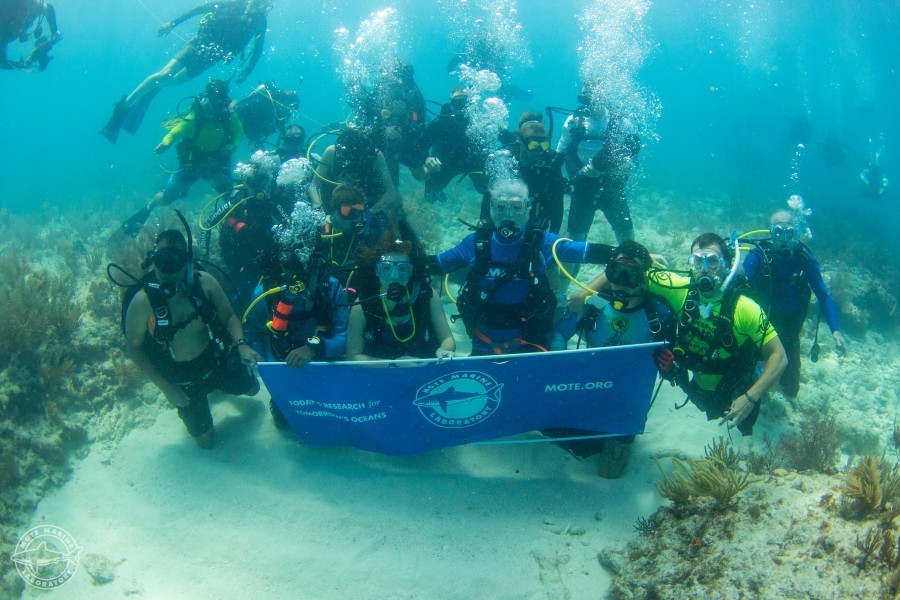 Some 36 members of the Combat Wounded Veteran Challenge (CWVC) and SCUBAnauts International joined forces with half-a-dozen scientists from Mote Marine Laboratory for the one-day record-breaking mission on the reef. The number of corals planted marked the most-ever the groups have planted in a single day since they began working together in 2012. All told, the groups have planted more than 1,600 corals in an area unofficially named “Hero’s Reef” in honor of all current and former members of the U.S. Armed Forces.

CWVC improves the lives of wounded and injured veterans through rehabilitative, high-adventure and therapeutic outdoor challenges while furthering the physiological, biomedical and pathological sciences associated with their injuries. The veterans who participate in the outdoor challenges have suffered from traumatic brain injuries, PTSD or have lost limbs.

SCUBAnauts International involves teens in the marine sciences with intensive dive and science training. Through its partnerships with universities and research organizations, SCUBAnauts learn to take charge as they work on innovative projects that positively impact our oceans.

Ten years ago, Mote established an underwater coral nursery where scientists grow colonies of the threatened staghorn coral (Acropora cervicornis) for replanting on decimated or damaged sections of reef within the Florida Keys National Marine Sanctuary. When the colonies reach a suitable size, small fragments nearly 2 inches long (about 5 cm) are snipped off and used to create a new colony — similar to the way new plants are grown from cuttings of existing plants. Then these cuttings are mounted on the reef so they can grow and develop into new colonies.

Mote has more than 10,000 colonies of staghorn coral in its underwater nursery —which includes more than 85 genotypes, allowing researchers to determine which corals have the heartiest genetic makeup and the best chances of survival. To date, Mote has planted more than 40,000 reef-building coral fragments to help restore Florida’s reef. Mote is also working on a new coral micro-fragmenting technology that is also allowing the organization to restore larger reef-building boulder corals on the reefs. Mote’s goal is to plant more than a million corals working in partnership with these and other groups.

“This is really a wonderful annual event,” said Dr. Michael P. Crosby, Mote President & CEO. “I don’t know of any other partnership like this involving really innovative science, young citizen scientists and veterans who are sharing their leadership skills. But this event has broader impacts beyond just doing great science. Every human being is connected to the ocean. The oxygen in every other breath we take comes from the oceans. Coral reefs are on the way toward extinction because of decades of human impacts. They were already stressed and now we have increasing temperatures, increasing acidity and more diseases that are pushing them past their tipping point. If we lose coral reefs, we’ll lose the oceans and if we lose our oceans, we’ll lose the very oxygen we need to survive.”

For Staff Sgt. Justin Lansford (ret.), 27, of Tampa, the event is restorative — and not just for the reefs. He was a member of the 82nd Airborne Division when he lost his leg in a roadside bomb explosion in Afghanistan in 2012. “After an injury like that, the way you look at life drastically changes,” he said. “Physical therapy can help with the physical changes but your perspective changes as well. I decided that I was going to do what I always wanted to do and that I wanted to put my focus and energy and efforts on doing things that feel good to do — like this dive. To spend this time each year, well, it’s cool to see these guys coming from the battlefield and have a different purpose and to see them working with the kids. It does feel special to get out here and take part in something bigger.”

The dive gives SCUBAnauts a chance to learn about more than just ecosystem restoration, said Capt. Dominic Gorie, USN/NASA (ret.), CWVC’s President. Gorie, who graduated from the Naval Academy, was a Naval aviator, piloted two NASA Shuttle missions and commanded two more NASA Shuttle missions before his retirement. “It was amazing to see all the divers planting coral on the reef and to see them so focused on this concentrated effort,” he said. “But this is also a wonderful opportunity for the SCUBAnauts to learn from the combat wounded veterans and gain a wider perspective on life.”

That idea wasn’t lost on Zack Morris, 16, of Parrish, Florida. “This is a really cool experience as a young person — you get to meet some of the most influential people — scientists and veterans — you’re ever going to meet. They just have all these amazing stories and lessons about life. No matter what happens, they’re always pushing through; they’re always going forward. It’s awesome to see that stuff when you’re a kid.”

This is the first year the dives have been staged from the brand new Elizabeth Moore International Center for Coral Reef Research & Restoration (IC2R3) at Mote, located on Summerland Key in the Florida Keys, which opened in May. The IC2R3 is advancing coral reef research using new seawater systems, raceways and experimental tanks for studying the effects of rising ocean temperatures and ocean acidification on multiple species. The Lab is also equipped for next generation genomic sequencing and analyses that will help uncover the best genetic strains of corals for reef restoration and more.

“It’s amazing to think that we planted 500 new corals in a matter of just a few hours,” said Dr. Dave Vaughan, Executive Director of the Moore Center. “Working with the kids and the veterans really is a memorable occasion for us every year. It’s really heartwarming to be involved in this event and know that we’re working together with these inspiring groups to restore Florida’s reef for future generations.”

The dive, conducted under Florida Keys National Marine Sanctuary (FKNMS) permit #2015-163-A1, was made possible through philanthropic support provided by:

Operations for Mote's Coral nursery are partially supported by the Monroe County Tourist Development Council and through the sale of the Protect Our Reefs specialty license plate. The sale of this plate to Florida drivers helps to support coral reef research, restoration and outreach. Learn more online at mote.org/reef-plate. 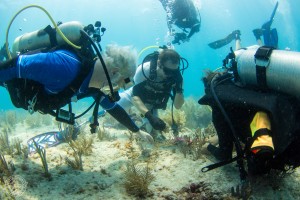 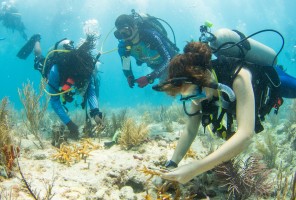 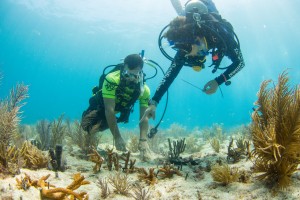 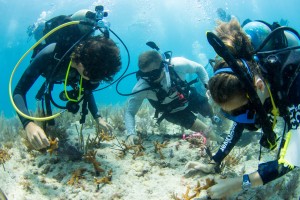