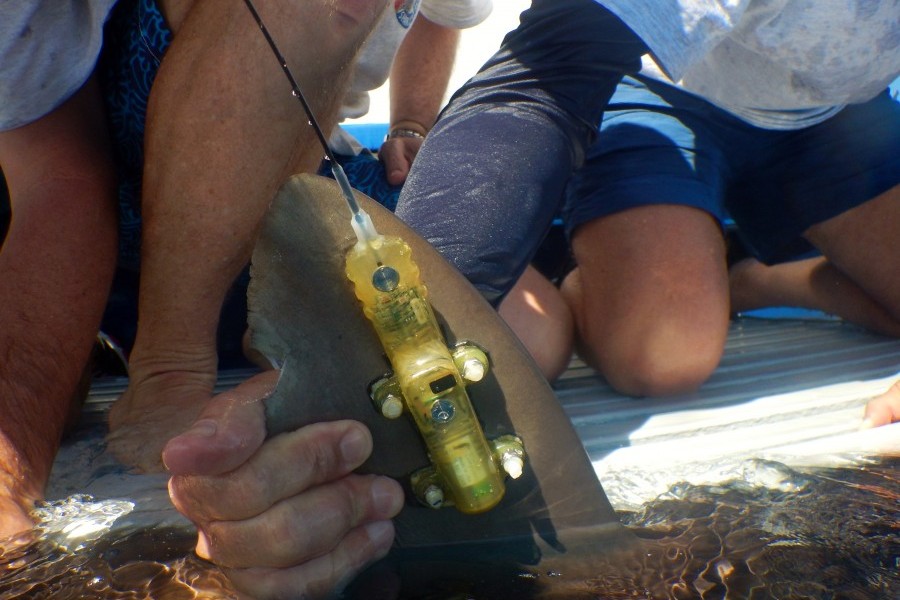 A silky shark's dorsal fin is fitted with a satellite transmitter during the first-ever expedition in Cuban waters.

Mote Marine Laboratory scientists and their Cuban colleagues are celebrating the publication of a study on the movement of three female silky sharks (Carcharhinus falciformis) tracked by satellite-linked tags off the Caribbean coast of Cuba.  This study is the result of the first expedition in Cuban waters to satellite-tag sharks, in accordance with Cuba’s National Plan of Action for Sharks, adopted in late 2015.

In a special Cuba edition of Bulletin of Marine Science, the peer-reviewed study sheds light on the life of this vulnerable species.

The study reveals results from a 2015 expedition, in which the scientific team tagged three silky sharks in the Jardines de la Reina (Gardens of the Queen) National Marine Park off Cuba’s south coast. Each tagging was a dream come true for the U.S.-Cuban scientific team that had worked for years to obtain permission and resources to place the first satellite tags on sharks of Cuba.

“Our dream was to be able to deploy satellite tags on sharks in Cuban waters, on both the north and south coasts, in an equal partnership of Cuban and American research teams,” said Dr. Bob Hueter, Director of the Center for Shark Research at Mote. “We were able to accomplish these goals for the first time with this expedition.”

The tags revealed that the sharks had made movements away from the inshore reef area where they were tagged and into deeper offshore waters, spending most of their time in the upper water column but also diving during the day. One of the sharks reached a maximum depth of 2,073 feet (632 meters). This was a notable observation due to the sharks’ consistent visits to the same eco-tourism dive spots known for attracting sharks with food.

“The data revealed that these sharks were not confined to the reef where the eco-tours take place,” said Hueter. “The sharks left the area regularly, which demonstrates that they were not dependent on the diving charters for their next meal. This leads us to believe that they were likely foraging off the reef and offshore in deep water in a natural way.”

One of the most dramatic aspects of the study was that it included a non-traditional method of tagging sharks. This novel approach seemed to cause minimal stress for the animals, but still allowed for accurate measurements and applications of tags. This technique did not utilize a hook, net, rope, spear or other such equipment. Instead, this in-water capture and release used a tail grab and pinch to relax a large, free-swimming shark, followed by upright cradling of the animal and stroking its abdomen while the tag was applied. Scientists are curious about why this technique is effective?  It is suspected that this simulates some aspect of courtship behavior in the species, which triggers a submissive state. This could be likely because the technique was used by the researchers on large females. The collaborating scientists plan to explore this subject further.

The international collaborators will continue their shark research and conservation later this summer with an expedition to study oceanic whitetip sharks (Carcharhinus longimanus) off the north coast of Cuba for its National Plan of Action for Sharks. The species was recently classified as “Threatened” in the IUCN Red List of threatened species and under the U.S. Endangered Species Act.

Stay tuned for updates on the Mote’s collaboration with Cuban scientists at mote.org/news.

*The tagging technique described above was preformed by experienced members of the expedition. Like all wild animals, sharks should be observed from a respectable distance by the general public.