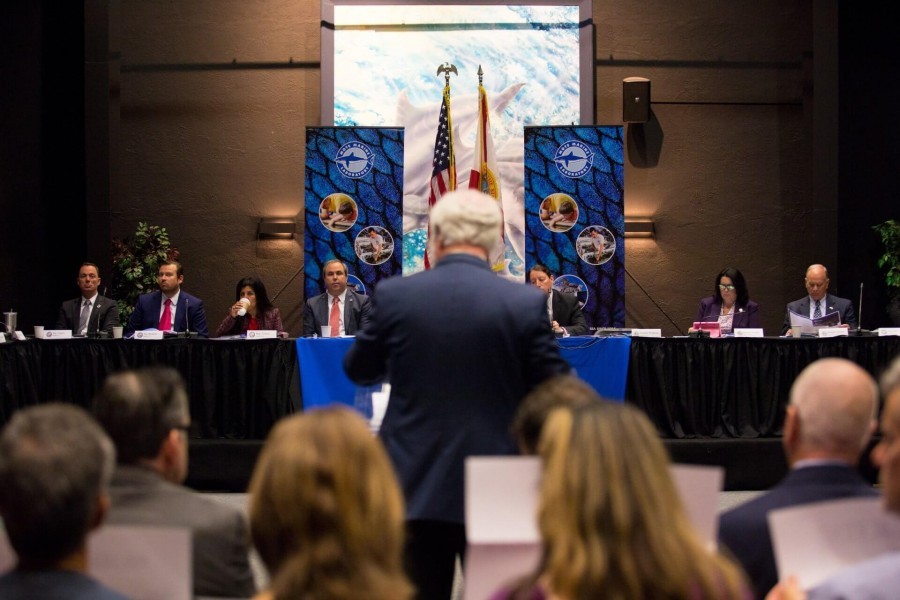 Florida legislators in the Bay Area Legislative Delegation (BALD) convened at Mote Marine Laboratory this morning, Feb. 26, to discuss multiple important priorities, including Florida red tide and the critical role of marine science and technology in addressing it. 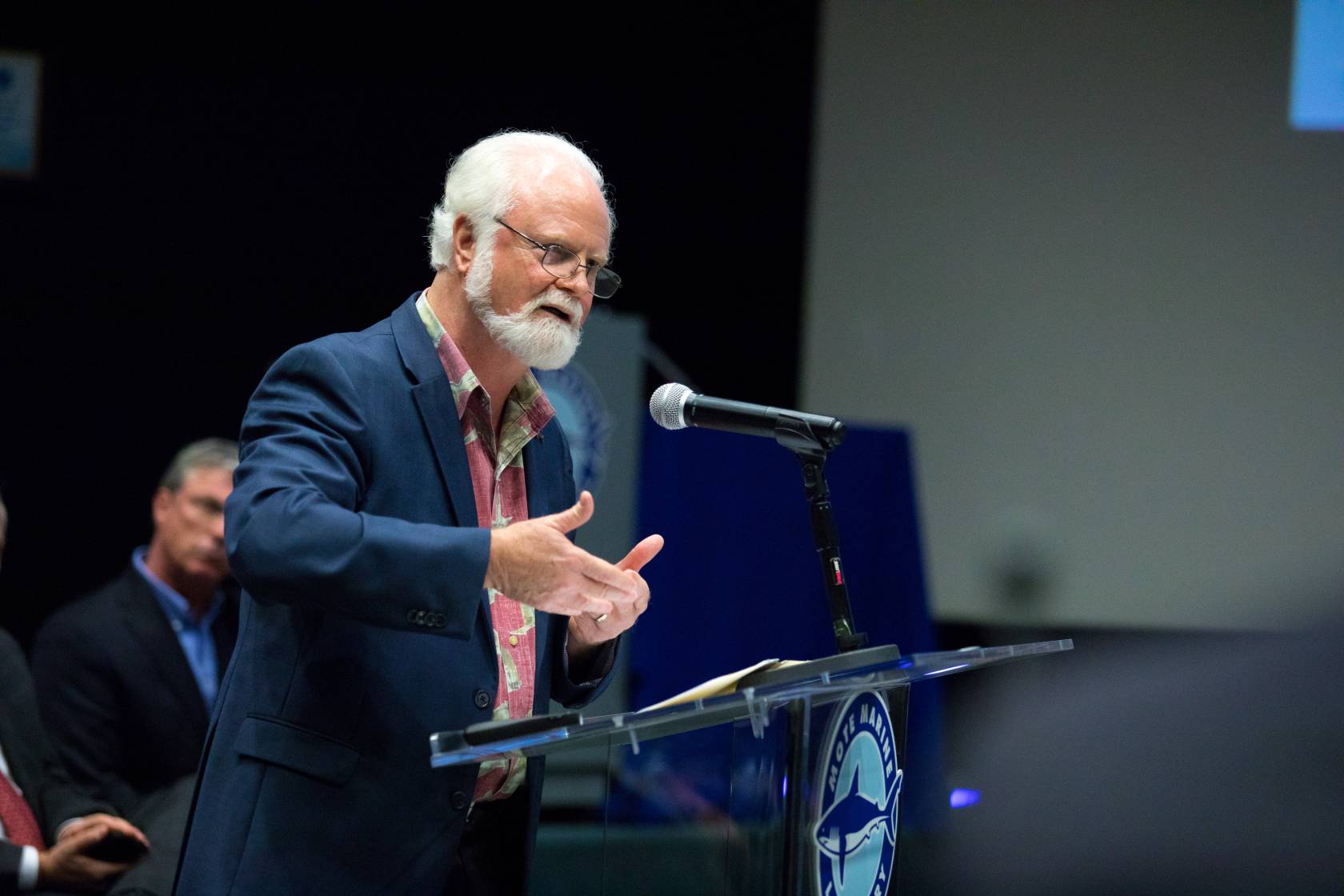 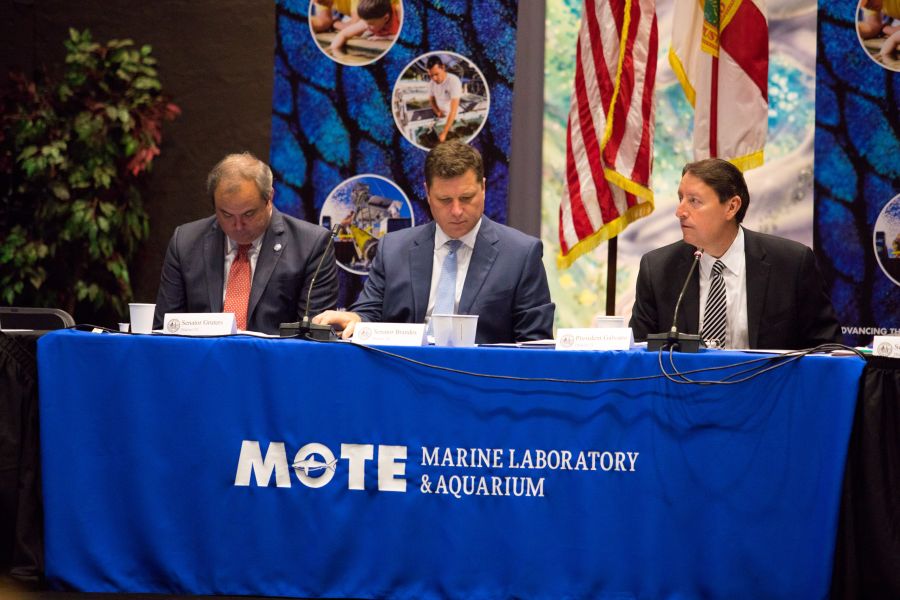 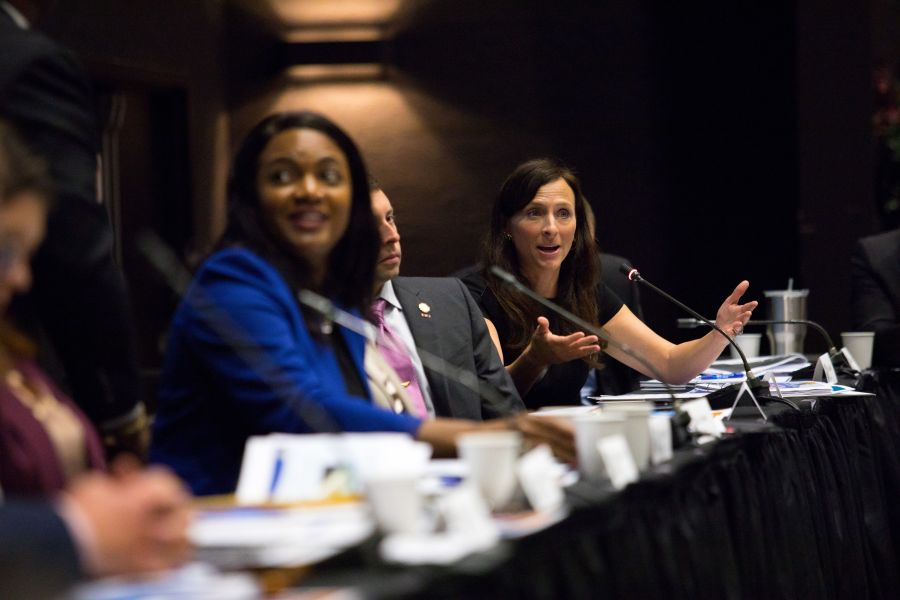 “Our economy, health, and quality of life are tied to the well-being of our environment,” Florida Senate President Bill Galvano said. “We must continue to explore innovative, research-based solutions that will help Florida address ongoing environmental concerns including red tide and toxic algae blooms, among others.”

Galvano thanked Mote leaders for their work on red tide and other key environmental issues. “Mote has done a tremendous job in Florida and around the world in leading with research, ideas and development in the marine biology realm, and it has certainly grown here in Sarasota and the Florida Keys. We are very pleased with the progress it continues to make.”

In particular, Crosby called for the Florida legislature to build upon the important progress made to date by appropriating $3 million for a new, five-year Red Tide Mitigation & Technology Development Initiative, to be spearheaded by a partnership of Mote and FWC, together with DEP.

“Developing new technologies to fight red tide is not science fiction,” Crosby said. “We can do it. We are already doing it.”

He continued: “The Florida Red Tide Mitigation & Technology Development Initiative will bring together the best and brightest scientists from Florida and around the world to address the critical need for prevention, control and mitigation of Florida red tide impacts. Through applied science, innovation and technology transfer, we will answer the call of communities affected by these harmful algal blooms.”

Sen. Joe Gruters said: “Thank you, Dr. Crosby, for your leadership with the red tide Initiative, and your goal of bringing in consistent dollars for research. The Sarasota delegation is united in our efforts to bring in more of that consistent funding. The 41 years I’ve lived in Sarasota, I have never seen red tide impacts this serious. We have two bills upcoming in this legislature related to this, and today I’d like to make a motion that we make Mote’s Red Tide Mitigation and Technology Development Initiative  one of our delegation priorities.”

The motion was seconded by Rep. Wengay “Newt” Newton and it passed unanimously.

Mote’s commitment to red tide research and mitigation was unmistakable during the recent, intense bloom that spanned late 2017 to early 2019. In 2018, Mote and its cooperative partners at FWC worked tirelessly with others statewide to meet demands for data on bloom. Mote completed thousands of counts of red tide cells in water samples, expanded its monitoring to focus on red tide’s airborne toxins that affect the public, responded to 1,467 calls from the public reporting stranded wildlife, led a rapid assessment of snook along Boca Grande — where reproductively active fish were hit hard by red tide — and much more.

Above all, Mote scientists have begun ramping up red tide mitigation research that will further accelerate with the Florida Legislature’s support of the Red Tide Mitigation and Technology Development Initiative. In late 2018, a beginning for such progress was established when the Andrew and Judith Economos Charitable Foundation provided a $1-million philanthropic investment to launch the first year of the Red Tide Institute at Mote Marine Laboratory. The Institute’s sole mission is to find the best red tide mitigation tools, expedite the effort to test them and select the most promising candidates. Mote scientists have already been exploring multiple mitigation technologies, including testing a new clay application in collaboration with Woods Hole Oceanographic Institution, University of South Florida (USF) and others, and testing Mote’s patented ozone system for removing Florida red tide and its toxins from limited-flow areas such as canals and small embayments.  The Charles & Margery Barancik Foundation has also recently committed  $750,000 over five years to Mote’s Red Tide Institute.

“The new Red Tide Mitigation and Technology Development Initiative will build upon decades of highly productive research by Mote, FWC, DEP, USF — all of us who continually work together on this grand challenge — and leverage recent, critical investments including the generous support of the Andrew and Judith Economos Charitable Foundation and the Barancik Foundation.” Crosby said.

“All of your districts are impacted by red tide. When you think that a single year of Florida red tide can have over $125 million impact to our coast , it’s clear how realistic it is to make one investment in the technology to fight red tide. Give us five years and we’ll develop those technologies, and we’ll deploy them as the years go on. With your support we’re going to be able to do it.”

FWC Executive Director Eric Sutton presented the agency’s own vision to increase research and monitoring on multiple fronts, including through long-term partnerships with Mote — which emphasizes mitigation, biological and chemical dynamics of red tide — and USF — with its complementary focus on physical oceanography and forecasting. The spirit of statewide collaboration for Florida red tide research was unmistakable.

“I thank President Galvano for convening us in Sarasota, and I appreciate that we highlighted two of the region’s most important issues,” said Rep. Margaret Good. “Water quality and environmental protection are key to making sure that we thrive economically. I appreciate Mote’s efforts in researching the root causes of red tide and appreciate their innovative efforts at red tide mitigation. Mitigation coupled with prevention efforts are  a promising strategy for dealing with red tide.”