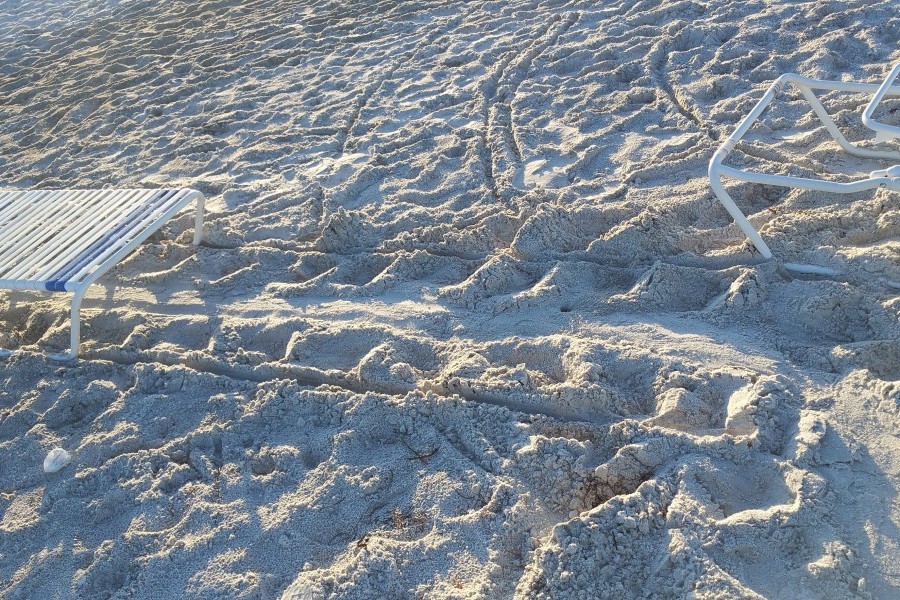 Mote Marine Laboratory found evidence that two nesting sea turtles dragged beach furniture caught on their upper shells during the past week on Longboat Key — a reminder that southwest Floridians should remove beach furniture at night to protect these threatened and endangered reptiles.

Loggerhead sea turtle tracks leading beneath a beach chair, with lines showing the chair had been dragged several feet, were reported July 9 by Mote scientists and volunteers from the Longboat Key Turtle Watch, which monitors the Manatee County portion of Longboat Key under Mote’s state permit. Fortunately, the turtle left the chair behind.

“We are quite concerned because we don’t know if that turtle was able to free itself; anything that impedes a turtle’s ability to swim and surface to breathe could be a serious problem,” said Kristen Mazzarella, senior biologist with Mote’s Sea Turtle Conservation & Research Program.

Southwest Florida’s most common sea turtle species nest at night. Furniture left on the beach at night presents an obstacle to nesting turtles and their babies, called hatchlings. Mote’s Sea Turtle Conservation & Research Program monitors 35 miles of beaches from Longboat Key through Venice each day of nesting season, May 1-Oct. 31. Prior to the past week, Mote has reported a couple of cases where turtles dragged beach furniture in the past few years, along with numerous other interactions, such as turtles hitting or becoming stuck underneath beach furniture.

Local ordinances require that temporary structures (including beach furniture) be removed from the beach or stored as close to the dune line as possible without impacting the dune or native vegetation from 11 p.m.-5 a.m. during nesting season on Longboat Key, and removed or stored in county-designated areas from sunset to sunrise on other local beaches covered by Sarasota County’s Marine Turtle Protection Code. This is critically important, given the increased numbers of nesting turtles visiting our beaches in recent years.

Turtle-friendly tips:
Beach furniture, trash and other obstacles can impede sea turtles and their young. Also, light from waterfront properties can disorient sea turtles, which emerge at night and use dim natural light to find the sea.

Here are some “do and don’t” tips to keep our beaches turtle-friendly: