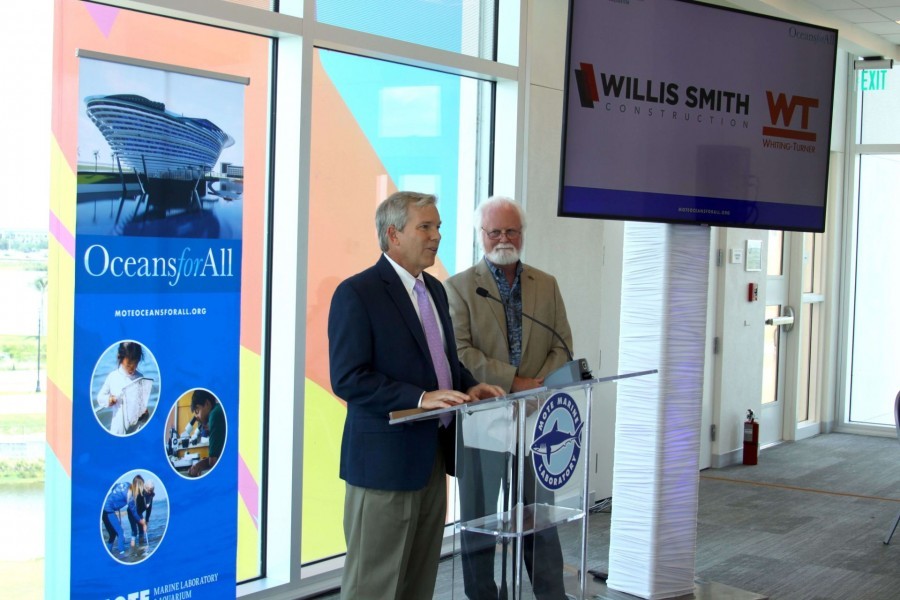 May 16, 2019 – Sarasota, FL – Mote Marine Laboratory leadership is pleased to announce the selection of a partnership between a local construction management company and an international firm for the construction of Mote Science Education Aquarium (Mote SEA): Willis A. Smith Construction, Inc., and The Whiting-Turner Contracting Company.

Mote’s President & CEO announced the selection Thursday, May 16, surrounded by Trustees, major donors, supporters and community leaders at the Finish Tower at Nathan Benderson Park, overlooking the future home of Mote SEA. This major milestone results from many months of careful assessment by a committee of Mote Trustees and senior staff. The committee scored three incredibly competitive candidate finalists on numerous criteria, including the qualifications and experience of their respective staff members assigned to the project, the companies’ success with similar projects, detailed proposals and projected costs, metrics related to safety, insurance applicability and financial health, and more. 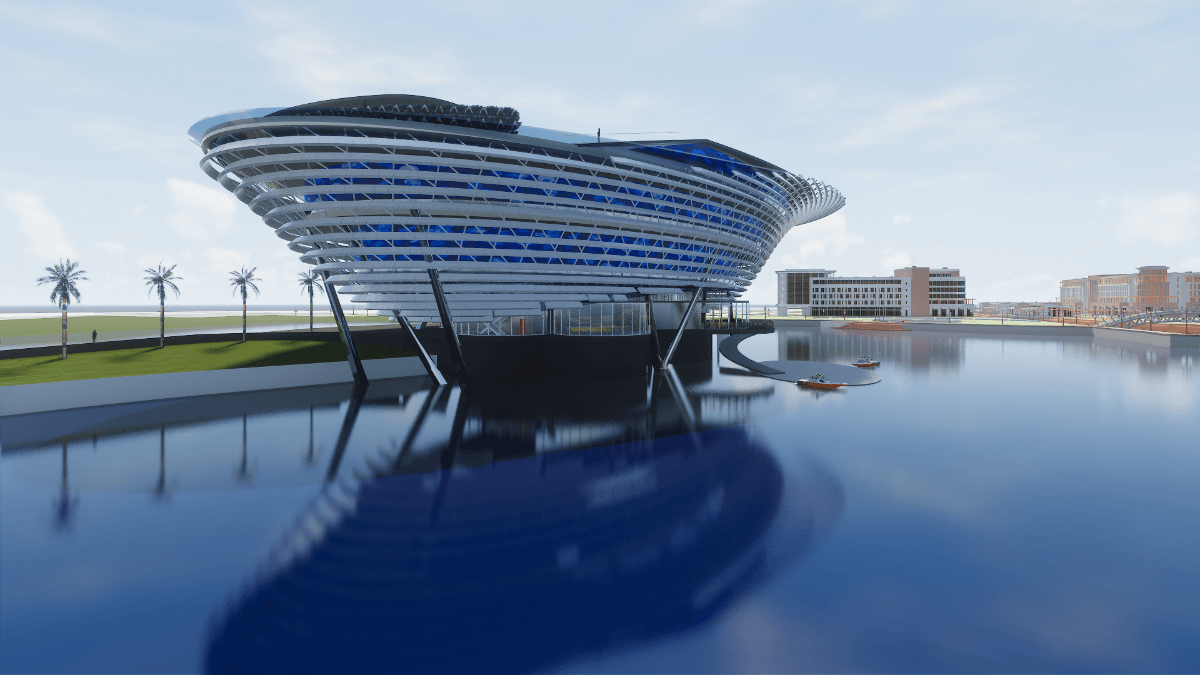 “This is a significant step in our journey to create Mote SEA and realize its economic and societal benefits for the southwest Florida region and the State of Florida,” said Mote President & CEO Dr. Michael P. Crosby. “Our Trustees, staff, supporters, and communities should be proud of all they’ve done to help us reach this point and excited that we will now be able to focus increasingly on the concrete details of creating this important and lasting cultural asset.”

“Willis Smith Construction is a 47-year, local, construction management firm specifically known for building Sarasota and Manatee landmarks,” said John LaCivita, Executive Vice President of Willis Smith. "The new Mote Science Education Aquarium will become a landmark destination, not only for our local region, but also for the State of Florida, and it will be recognized worldwide once completed. We have teamed with the prestigious firm of The Whiting-Turner Contracting Co., an industry leader in specialty entertainment construction and aquariums. During the construction phase, this project will be an economic driver to all of Southwest Florida, and it will have tremendous, annual economic impact to both counties, once open. Our team is ready to get started!”

Now, Mote leaders are working with Willis Smith and Whiting-Turner to move forward during the preconstruction phase in close collaboration with project architect CambridgeSeven and Mote staff.

Fundraising for the project shows similar momentum. The $130-million campaign to create Mote SEA, Oceans for All: Improving Access to Marine Science & Technology, has already attained $34 million in commitments from philanthropic donors, including $2 million in just the past 31 days. The campaign focuses on a resilient combination of public, philanthropic and corporate giving. Learn more and check for future Mote SEA milestones at: moteoceansforall.org

Mote SEA will be an iconic, 110,000-square-foot hub of marine science education and outreach located in Nathan Benderson Park, a nexus site for Sarasota and Manatee counties and the southwest Florida region. It will feature more than 1 million gallons of exhibits with marine life and scientific displays from around the world and is projected to double the attendance of the current Mote Aquarium, with 700,000 visitors in opening year. Its projected economic impacts include $280 million from construction alone and $28 million per year from operations. Mote SEA will have three state-of-the-art STEM (science, technology, engineering and math) teaching labs and will offer educational programming to some 68,000 students from Sarasota, Manatee and surrounding counties free of charge. This education component represents an annual STEM-education-service value of more than $3 million to all schools in the region, and will add priceless value to the region’s quality of life. With the nearly 40-year-old, existing Mote Aquarium reborn as the Mote SEA at Nathan Benderson Park, Mote Marine Laboratory will be poised to launch the distinct transformation of its City Island campus into an International Marine Science, Technology & Innovation Park that will ultimately catalyze the development of a “Silicon Valley” for marine science and technology in Southwest Florida that will fuel the growth of a diverse “blue economy.”

About Mote Marine Laboratory & Aquarium
Mote Marine Laboratory & Aquarium is an independent, nonprofit, 501(c)3 research institution founded in 1955. Mote began and flourished through the passion of a single researcher, Dr. Eugenie Clark, her partnership with the community and philanthropic support, first of the Vanderbilt family and later of the William R. Mote family. Today, Mote is based in Sarasota, Florida, with five campuses stretching from Sarasota to the Florida Keys. Mote has more than 20 world-class research programs studying oceans locally to internationally, with an emphasis on conservation and sustainable use of marine resources. Mote’s vision includes positively impacting public policy through science-based outreach and education. Showcasing the Lab's research is Mote Aquarium, open from 10 a.m. to 5 p.m. 365 days a year. mote.org

About Willis A. Smith Construction, Inc.
Willis A. Smith Construction, Inc. is a privately held construction management firm based in Sarasota, Florida, providing expert commercial builder services. The company has provided quality construction services in Southwest Florida since 1972, and its full-service capabilities are customized to meet each owner's specific project needs at all phases of the assignment. Willis Smith’s mission is to promote excellence and integrity in the construction industry while contributing to the betterment of their clients and the communities they serve. willissmith.construction

About The Whiting-Turner Contracting Company
Whiting-Turner provides construction management, general contracting, design-build and integrated project delivery services on projects small and large for a diverse group of customers. They constantly strive to exceed each client’s expectations through innovation, collaboration and best practices. With more than 30 offices nationwide, Whiting-Turner has a strong presence throughout the country while recognizing the value in community involvement and the benefits of strong local subcontractor relationships. Whiting-Turner’s core values of integrity, excellence, experience and leadership were established more than a century ago and continue to drive the company’s success today. whiting-turner.com