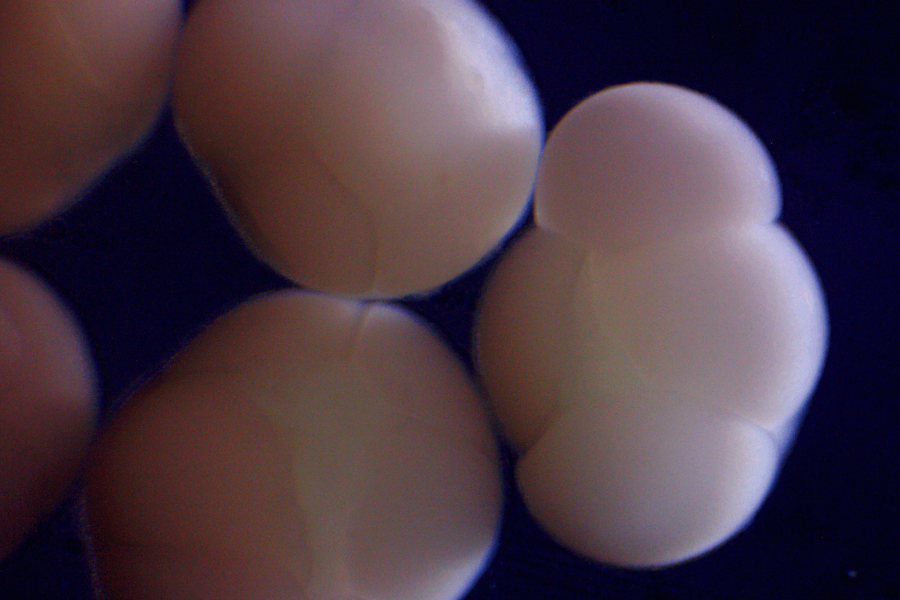 Florida’s coral reefs have enough problems—unprecedented levels of coral disease, climate change, pollution and hurricanes—without struggling to reproduce sexually. But struggle they do.

As environmental stress grows and coral populations shrink worldwide, coral sexual cycles are becoming disrupted and failing altogether in some locations and for some species, which has serious implications for the survival and long-term persistence of natural and restored populations. Sexual reproduction—in which the DNA of gametes (sperm and eggs) from two different corals of the same species recombine through a cyclic process of spawning and fertilization—provides the next generation of genetically diverse coral offspring that can replenish depleted adult populations and disperse to establish new reefs.

Genetic diversity, powered by sex, is a safety net that promotes population resilience by providing a buffer against environmental change and the flexibility to adapt. When sexual reproduction breaks down, so does that safety net, just when corals need it most.

Since the 1980s, coral cover has declined by approximately 80% in the Caribbean and 50% worldwide. The resulting small patchy populations have less successful spawning, fertilization and recruitment of new individuals back into the population. This is why Mote Marine Laboratory, and several other organizations, are stepping in to assist with coral sexual propagation, and why research scientists, like Dr. Hanna R. Koch, are exploring novel reproductive interventions for advancing coral restoration strategies. Koch is a Postdoctoral Research Fellow with the German Research Foundation and Visiting Research Scientist at Mote’s Elizabeth Moore International Center for Coral Reef Research & Restoration (IC2R3). She is collaborating with Mote scientists Dr. Erinn Muller and Erich Bartels to investigate the heritability of disease resistance and establish a managed breeding program for generating more resilient offspring for coral restoration.

“Now, our one organization can do every step essential for resilient coral reef restoration, and I think this is a big deal,” said Muller, Science Director for Mote’s IC2R3. “We can complete the sexual reproduction steps of spawning, fertilization and larval settlement; we can grow corals out, identify individual coral genotypes (genetic varieties) and test them for resilience to multiple stressors; and we can produce more coral colonies through asexual fragmentation and outplant them to depleted reefs. Then those adult colonies can produce more offspring to start the cycle all over again.” 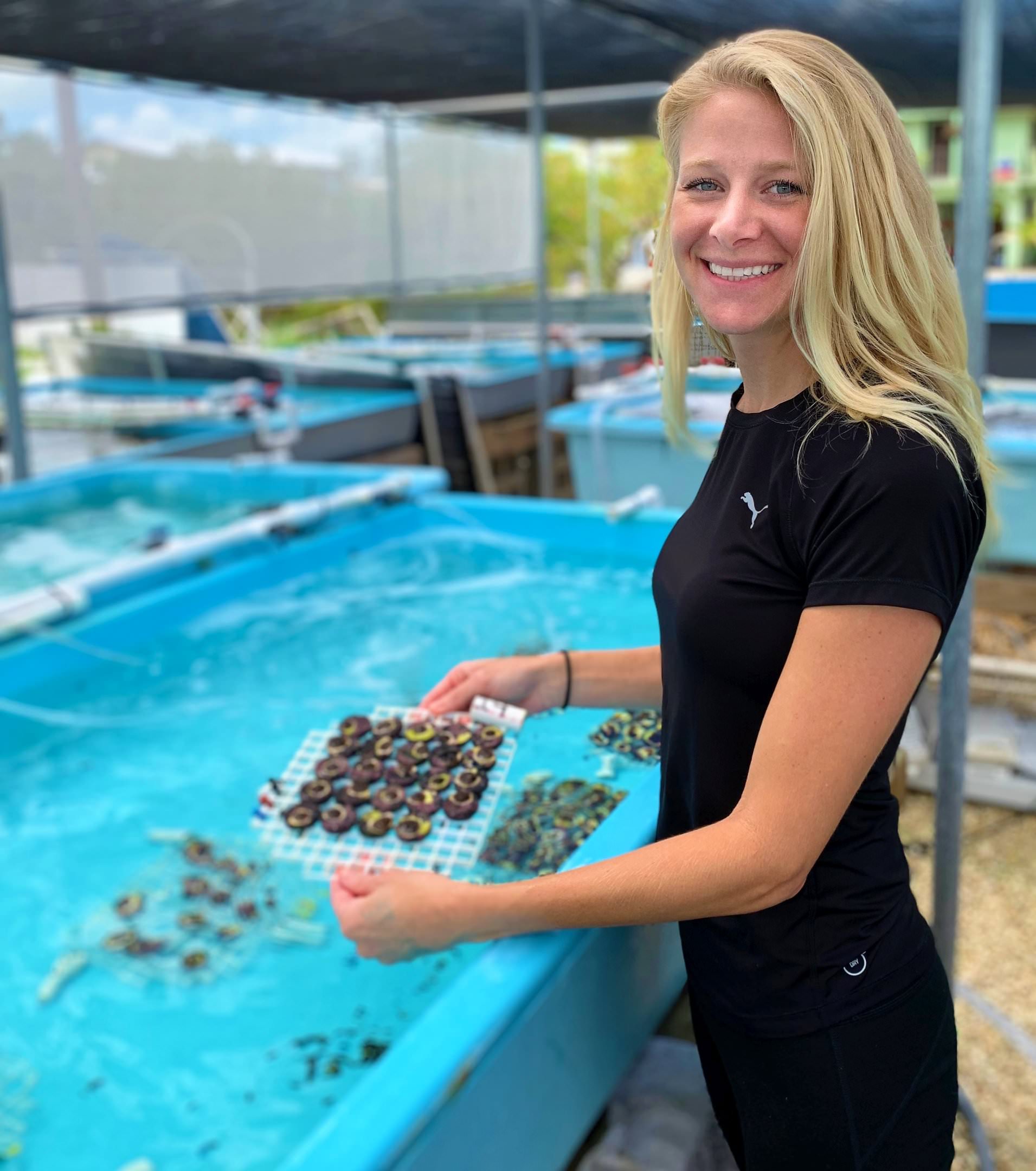 Preparing corals for their big day 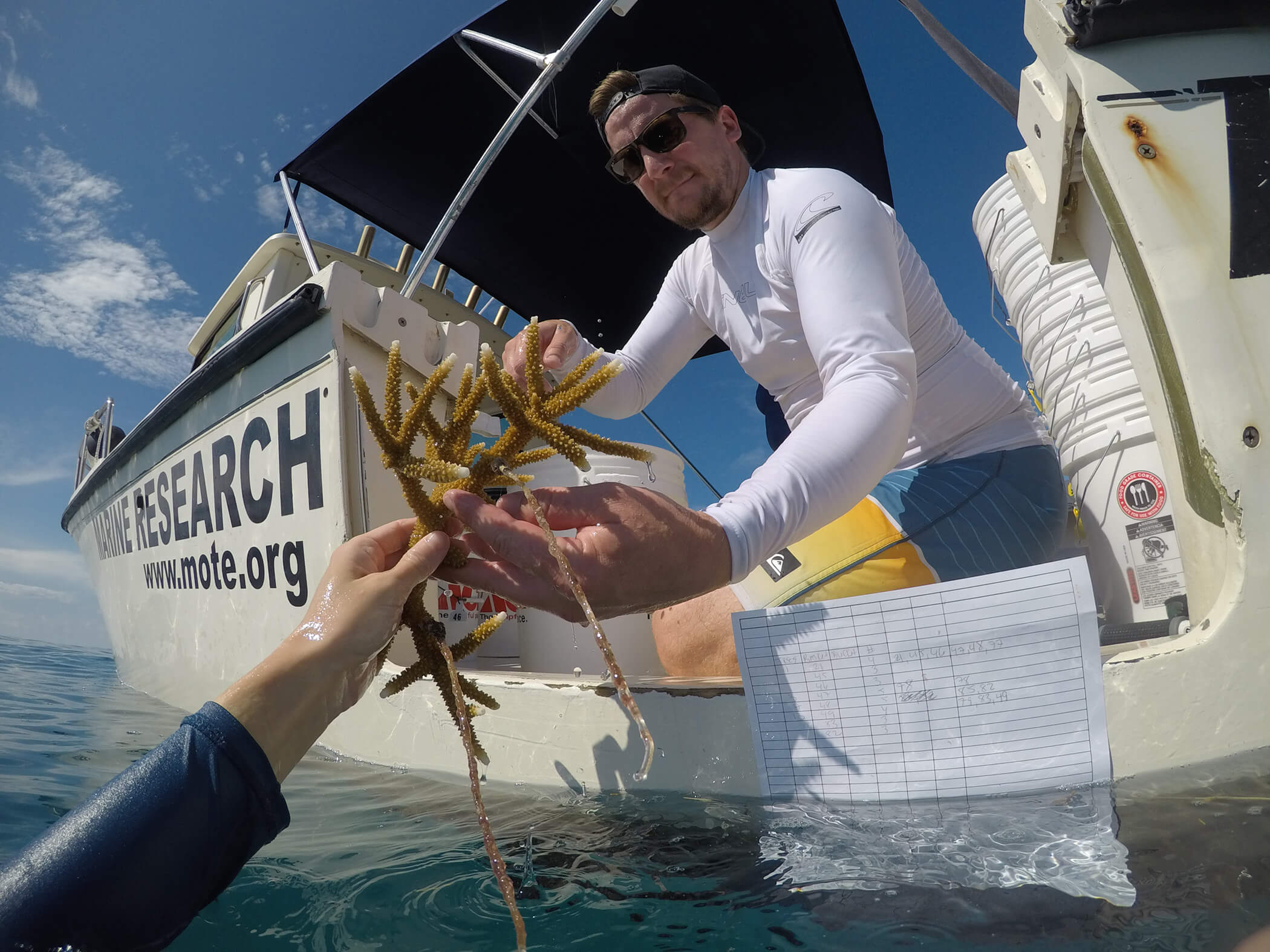 In spring 2019, Koch and partners laid the groundwork for their managed sexual reproduction effort using staghorn coral (Acropora cervicornis), a species whose populations have declined 95% in the past 40 years due to whiteband disease, high ocean temperatures and other stressors. Now listed as Threatened under the U.S. Endangered Species Act, staghorn coral is one of several focal species of Mote’s research and restoration programs that have raised and documented numerous staghorn genotypes with varying traits. In April, Koch, joined by Bartels and intern Allyson DeMerlis, set up Mote’s first coral spawning nursery within Bartel’s staghorn restoration nursery off Looe Key. The team modified the coral “trees”—that usually hold small coral fragments being propagated asexually—to hold larger colonies. Colony size, not age, determines sexual maturity: when these hermaphroditic corals produce both male and female gametes.

In July 2019, Koch and DeMerlis sampled their corals and found that half contained developing gametes—a better percentage than typically seen on stressed, wild reefs. For this reason, Koch said, “spawning nurseries have the potential to provide greater and more reliable access to coral spawn that can be used for research and restoration.” She added, “We grew these sexually mature colonies from large fragments in less than a year in this nursery, which speeds up progress significantly for this type of work—especially since wild or outplanted corals may need two or more years.” 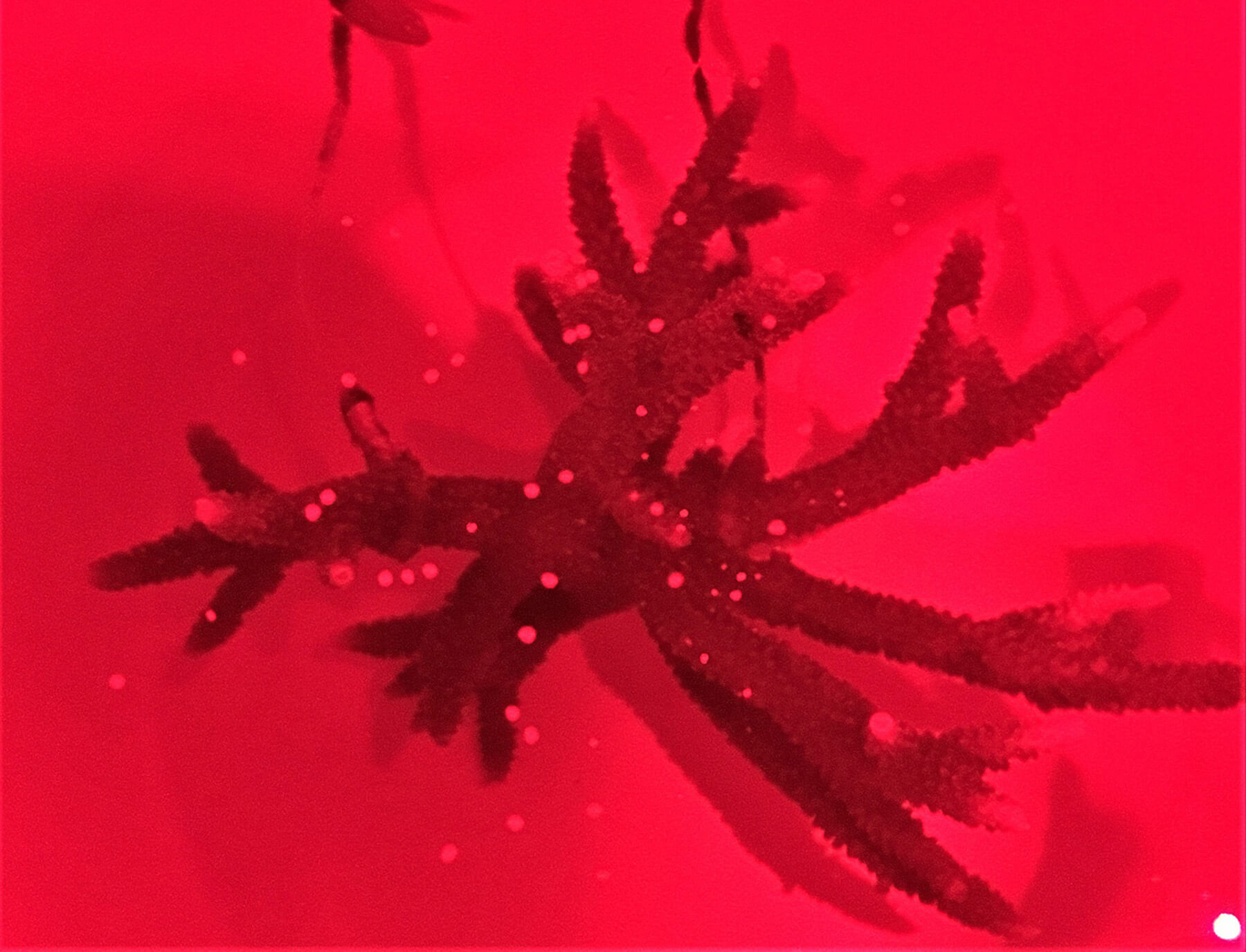 Photo: A spawning staghorn coral releases gametes that will fuse with gametes from a genetically distinct staghorn coral in the process of sexual reproduction. Credit: Dr. Hanna Koch

Humans aren’t the only ones who get a bit amorous under the full moon. Staghorn corals spawn at night, primarily two to six days after the August full moon. To prevent field operations being disrupted by unpredictable weather, Koch and Mote staff brought 62 nursery-raised staghorn corals into outdoor tanks at IC2R3 and provided the sunset and moonlight cues needed for spawning.

Koch and her team spent eight long nights on spawning duty, wearing full-body clothing to protect against mosquitoes, as bug spray and other chemicals aren’t allowed around sensitive coral gametes. They used red lights to watch for corals “setting”—where gamete bundles are moved into position for release, a helpful signal that spawning is imminent. 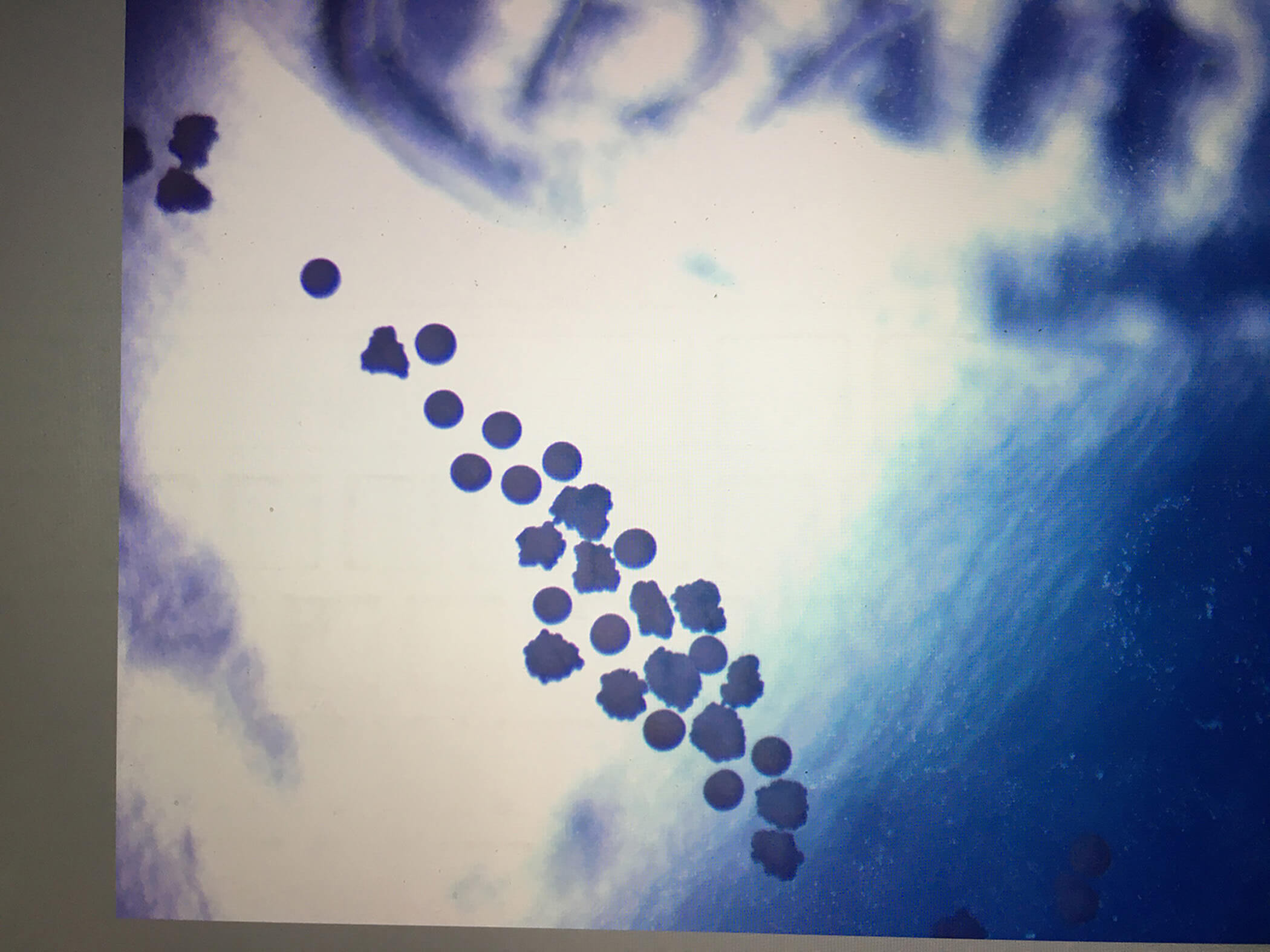 Of 62 coral colonies, nine colonies of four genotypes spawned. “I was very pleased with the results, as these colonies were relatively small and first-timers; this initial spawning behavior data is crucial to developing a successful breeding regime,” Koch said. “Interestingly, the genotypes that are whiteband disease resistant did not spawn during the predicted window, indicating more research is needed to understand why,” she added.

Fortunately, certain coral colonies released their gametes with enough synchrony (similar timing) to allow breeding between genetically different parents. Corals must spawn on the same night to combine their sperm and eggs, which are only viable for a few hours. However, coral spawning synchrony is declining in the wild as populations and environmental conditions become degraded. The team collected the gamete bundles and allowed them to break up in the lab, releasing sperm and eggs. Then they combined eggs and sperm from genetically different parents—cross fertilization—to produce diverse offspring. Breeding success between two corals can vary depending on which parent provided the sperm and which provided the egg, so Koch allowed each coral in a pair to be mom, then dad.

The next day, the team gazed through their microscope to spot developing embryos—irregular blobs distinct from the round, unfertilized eggs. “Fertilization rates were quite high, with one batch reaching 50% and the other 80%!” Koch said. 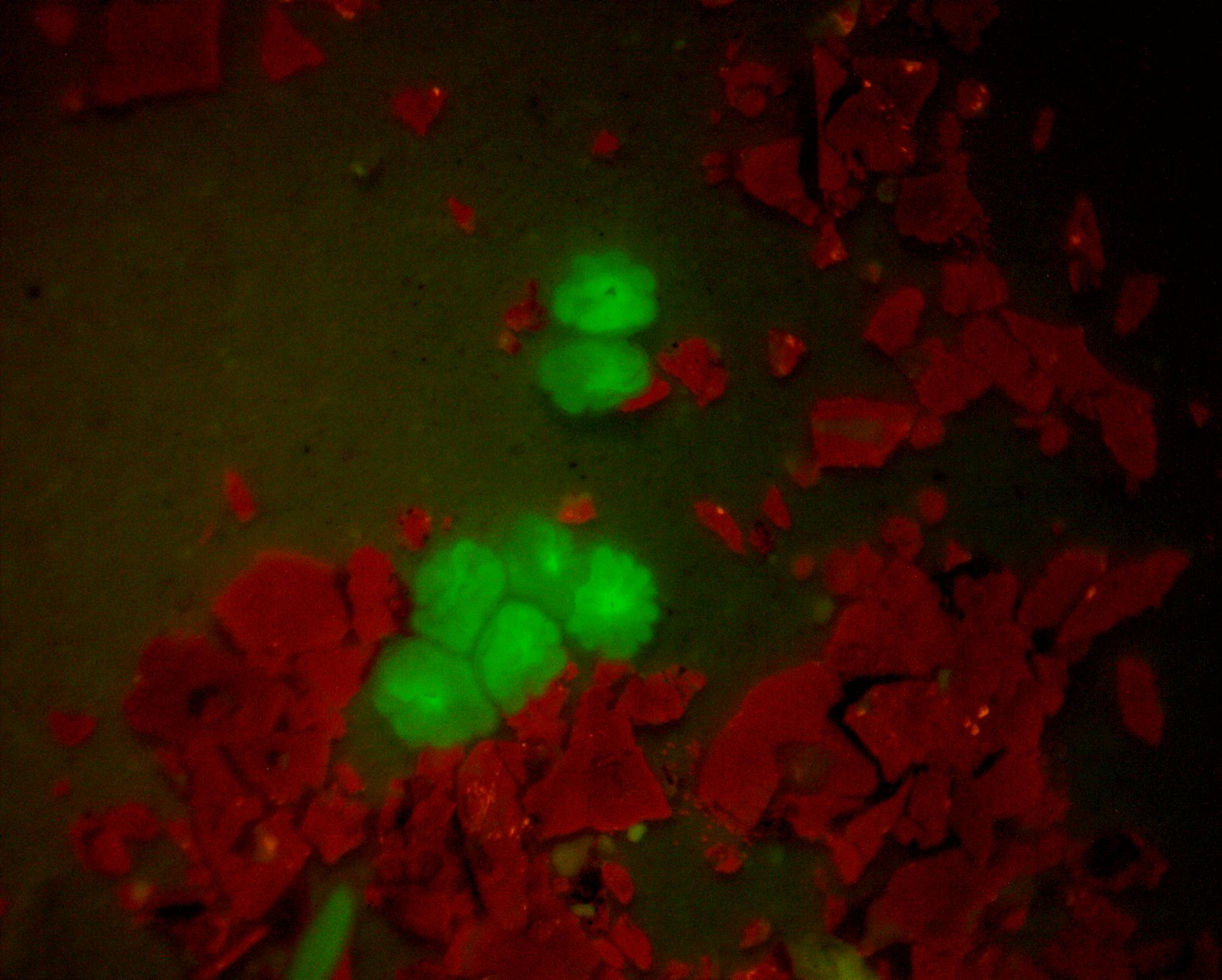 Within a few days, Mote’s staghorn coral babies had developed into larvae, which Koch settled on ceramic plugs. By Sept. 1, Koch had 50% settlement and was raising 200 coral settlers, also called sexual recruits, which will add fresh genetics to Mote’s staghorn restoration and research efforts. Each settled larva develops into a coral polyp—one of many that will ultimately form the coral colony. Polyps start out transparent and later gain color from special algae that enter their tissues and play a critical role in their survival.

New recruits are hard to see, but Koch uses blue light to detect fluorescence naturally emitted by the coral. “I’m using this method for more quickly identifying and more accurately quantifying microscopic sexual recruits,” she said. “Fluorescence starts during the larval stage, and this natural ability helps researchers in many ways, in addition to being absolutely beautiful!”

These glowing coral babies represent the possibility of a brighter future of restored reefs in the wild, and they’re the latest reminder that Mote’s coral science and restoration—newly strengthened through managed breeding—are a match made in heaven.