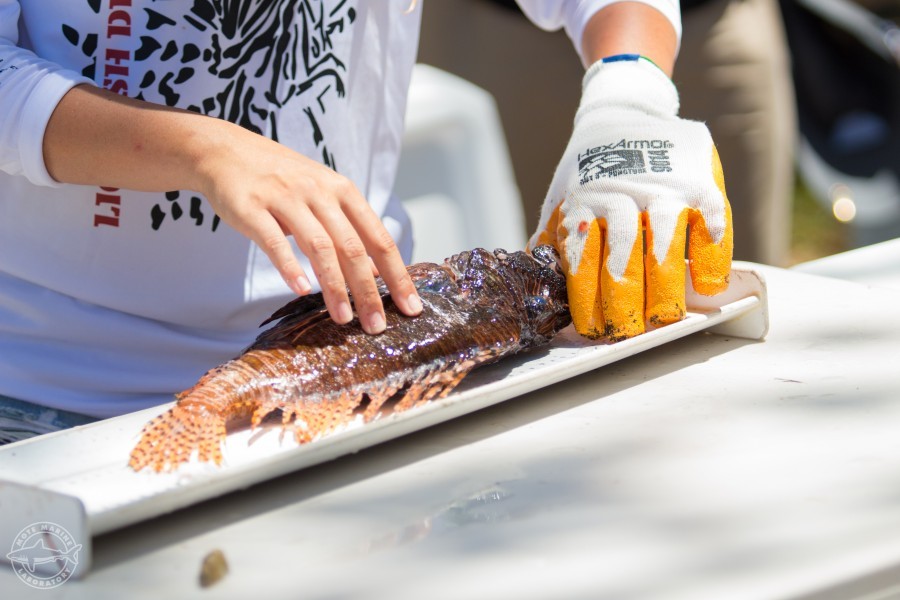 Divers removed 1,079 invasive lionfish from the Gulf of Mexico, saving an estimated total of at least 1.6 million fish from the invasive predator during the fourth annual Sarasota Lionfish Derby, which concluded July 9 at Mote Marine Laboratory.

The Sarasota, Florida-based derby was a partnership effort among Mote, a world-class marine science institution, and Reef Environmental Education Foundation (REEF), which helps study and address the lionfish invasion, sanctions official lionfish derbies, and provided the estimate of the Sarasota derby's benefit to fish. This was the first derby in the 2017 Summer Lionfish Derby Series coordinated by REEF. Three upcoming derbies are accepting registrations at: www.reef.org/lionfish/derbies.

The Sarasota derby from July 7-9 drew 14 teams, more than double last year’s six teams. Team divers vied to catch the most lionfish, the largest lionfish and the smallest lionfish in Gulf of Mexico waters ranging from Collier to Escambia County.

On July 9, more than $3,500 in total cash prizes were awarded to first, second and third place winners in each category during an awards ceremony that filled Mote’s WAVE Center to capacity. Leading up to the ceremony, top local chefs from Indigenous Restaurant, Seafood Shack, Beach House, Mattison’s Forty-One and Mote’s very own Deep Sea Diner prepared tasty dishes for a lionfish cooking competition. Winners were determined by popular vote. The public also visited educational booths about lionfish, checked out gear designed to capture them and watched lionfish be counted and measured by REEF staff and dissected by Mote scientists.

“We’re measured all these fish and then removed the stomach contents so we can more specifically identify the food items in their stomachs, and if we can’t identify them visually, we’ll DNA barcode them later,” said Dr. Jim Locascio, manager of Mote’s Fisheries Habitat Ecology Program. “We want to know exactly what they consume and what proportion of the prey are important commercially and recreationally. The general story is that these lionfish consume everything, but some fishes are more important to us – snapper, grouper, things we invest a lot in managing.”

The public can help document the lionfish invasion by reporting sightings through REEF, U.S. Geological Survey or the Florida Fish and Wildlife Conservation Commission (FWC). FWC has a Report Florida Lionfish app available for smartphones. REEF also has a free Lionfish Sightings App for iPhone, which allows people to track and record lionfish sightings all around the invaded region.

Mote would like to extend a thank you to the Sarasota Outboard Club for the donation of their facilities.