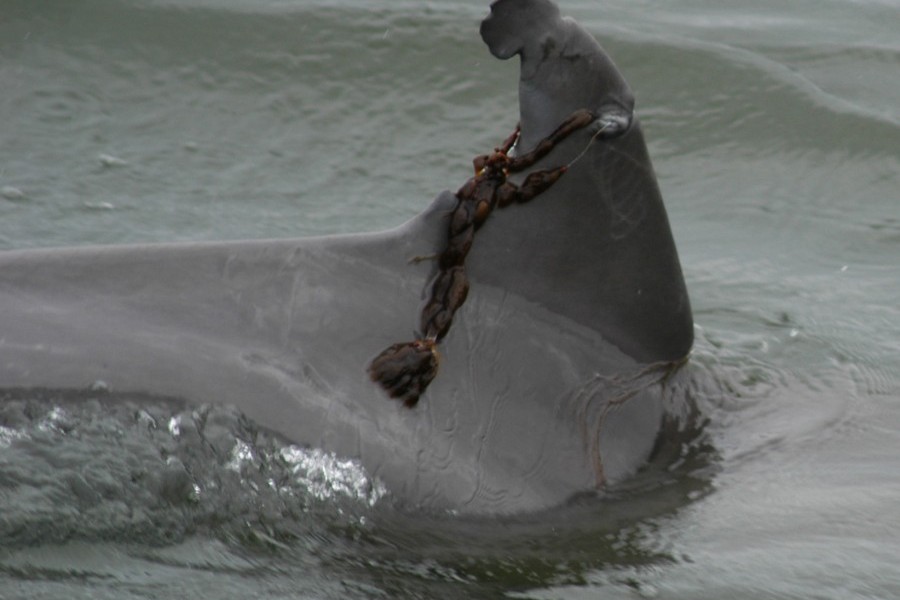 Image above: Bottlenose dolphin Toro, a juvenile female, was first documented with line embedded in her fin in Tampa Bay in 2003. The Sarasota Dolphin Research Program and Mote rescued her in Charlotte Harbor in March 2004. She was rehabilitated by Mote and released back in Charlotte Harbor in April 2004. She had multiple entanglement points, including her dorsal fin, and multiple deep wraps embedded in her pectoral flipper. She was observed seeking human-sourced food, made available inadvertently through recreational fishing.
Credit required: Sarasota Dolphin Research Program/CZS. Photo taken under NMFS Scientific Research Permit No. 15543. 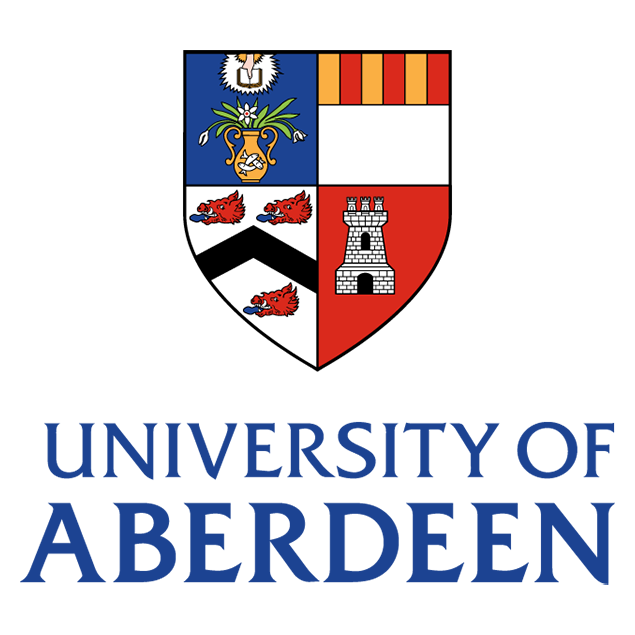 Wild dolphins are more likely to be injured if humans feed them — even through unintentional means like discarding bait — reports a new study based in Sarasota Bay, Florida, and published recently in the peer-reviewed journal Royal Society Open Science.

The researchers investigated why bottlenose dolphins begin seeking human-provided food and how this affects their risk of injury. The paper’s lead author from Murdoch University in Western Australia and researchers from the University of Aberdeen in Scotland analyzed data collected from 1993-2014 by the Chicago Zoological Society/Brookfield Zoo’s Sarasota Dolphin Research Program wild dolphin experts and Mote Marine Laboratory’s Stranding Investigations Program.

“This is the first study that directly links human-related feeding of wild dolphins — intentional or not — with increased risks of injury from human interactions such as boat strikes, entanglement in fishing gear or ingestion of hooks and line,” said Dr. Katie McHugh, staff scientist of the Chicago Zoological Society’s (CZS) Sarasota Dolphin Research Program (SDRP), a program of CZS in collaboration with Mote. “During the time span of this study, we saw an increase in the number of dolphins seeking and accepting food provided by humans. We asked: Why are we seeing this increase and what are the consequences?”

In general, SDRP and Mote scientists work to educate the public that feeding or harassing wild marine mammals is dangerous and illegal under the U.S. Marine Mammal Protection Act. Violators can be fined thousands of dollars, or in serious cases, spend up to a year in jail.

“Animals can die from human interactions — for instance, we examined a dolphin known as FB93 who was recovered dead with a fish hook embedded in her head leading to fishing line around her larynx, strangling her,” said Gretchen Lovewell, manager of Mote’s Stranding Investigations Program. “Even if an animal survives with a wound or entanglement, it might be less able to survive the next challenge.”

Before the current study, one of the strongest cautionary tales came from a long-term resident Sarasota Bay dolphin nicknamed “Beggar” because people fed him often. According to SDRP and Mote scientists, Beggar was found dead in 2012 with fish hooks in his stomach, broken bones, signs of old wounds, a history of abnormal behavior and health issues likely related to his human-altered diet. Though natural causes — stingray barbs — were suspected factors in his death, getting food from people didn’t help.

The new study analyzed data from 1,142 bottlenose dolphins identified by SDRP in Sarasota Bay, including 190 (16.5 percent) described as “conditioned” because they had accepted human handouts, targeted bait, catch or crab pots, or had “patrolled” back and forth within 20 meters of boats, lines or fishing piers. The authors found that 84 (7.5 percent) of the dolphins had human-related injuries by the end of the study period in 2014. 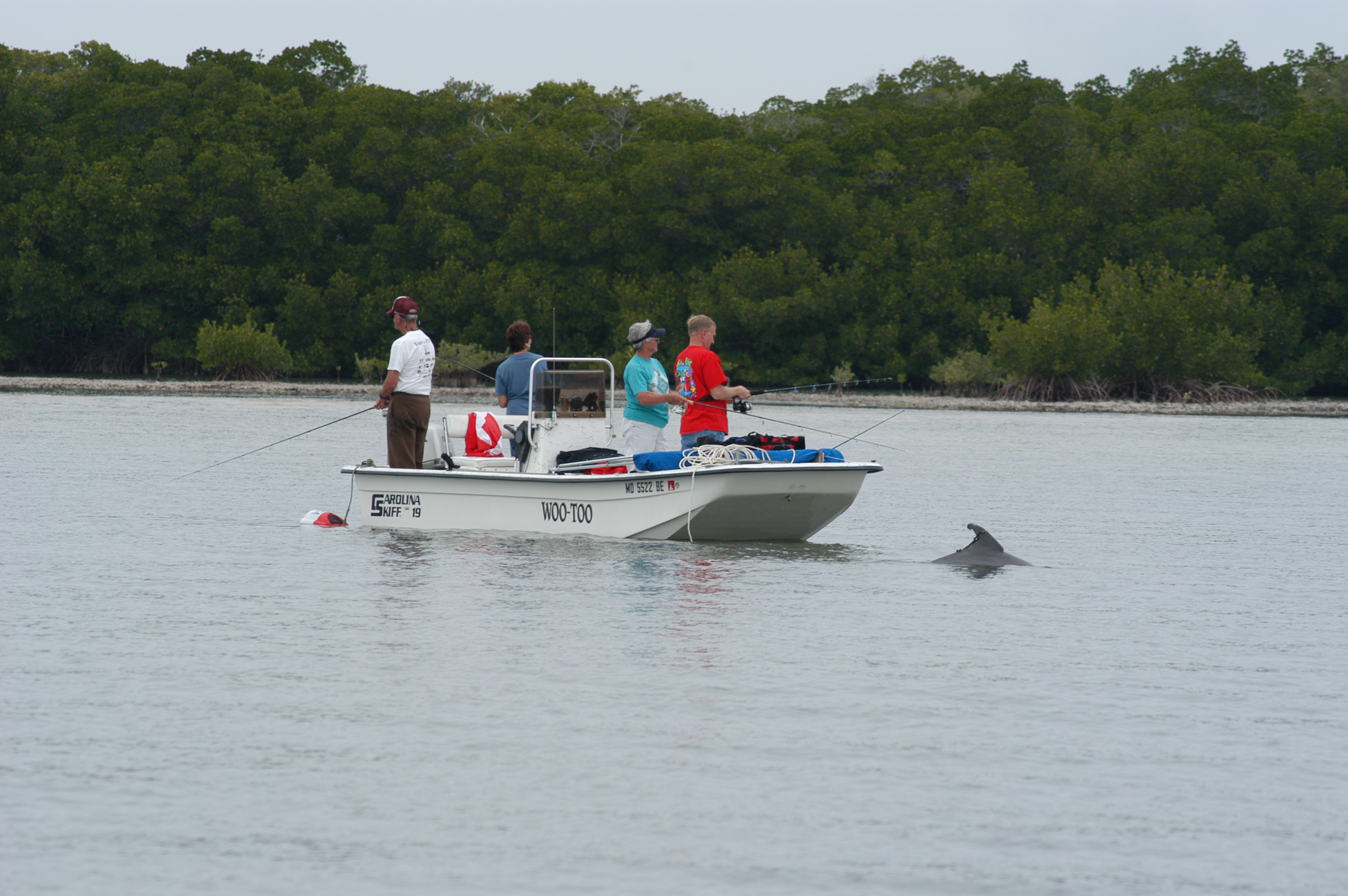 In a well-documented subset of the dolphins — 366 individuals observed in multiple seasons — 43.7 percent were dubbed “conditioned” and 20 percent had human-related injuries. Among the injured dolphins, more than a third died or required rescue by trained responders from Mote, SDRP and partners.

In the new study’s analysis, led by postdoctoral research fellow Dr. Fredrik Christiansen of Murdoch University in Australia, the researchers investigated injury risk in 404 well-documented dolphins. On average, dolphins conditioned to seek human-sourced food had approximately double the injury risk of those that were not conditioned. Independently, injury risks also increased with age.

“I think the results of this study are alarming, because it shows that food provisioning has the potential to negatively affect survival in a long-lived marine top predator,” Christiansen said. “Top predators are important in the marine ecosystems, and reduced dolphin populations can have cascading effects on lower trophic levels – fish and other prey species that dolphins feed on.”

How did dolphins learn these “bad habits”? To help find out, researchers from Murdoch University and the University of Aberdeen applied mathematical modeling and mapping analyses to the long-term dolphin data set only available from SDRP’s unique studies in Sarasota Bay.

“The Sarasota Dolphin Research Program has the longest running field study on bottlenose dolphins in the world, which makes it the ideal place to try to answer these questions about provisioning and conditioning,” Christiansen said.

Since 1970, SDRP scientists have operated the world’s longest-running study of a wild dolphin population, assessing the behavior, health, movement, prey and other characteristics of long-term resident bottlenose dolphins in their Sarasota Bay home. With such a long-range study, CZS’s SDRP scientists are experts in field techniques and methodologies for data collection. Mote’s Stranding Investigations Program — a 24-hour response service for sick and injured marine life in Sarasota and Manatee counties — collects multiple types of data from each dolphin rescued or recovered dead, complementing SDRP efforts for a cradle-to-grave understanding of wild dolphins and the threats they face.

In the study area of Sarasota and Manatee counties, the human population has more than tripled and the number of registered boats has quadrupled since 1970 — increasing the chances of dolphin-human encounters. Meanwhile, periodic blooms of Florida red tide algae have at times reduced available prey fish along west Florida by more than 90 percent, and major red tides of 2005 and 2006 overlapped with intriguing increases in dolphin-human interactions.

However, statistical analysis in the new study found that less prey and more human encounters in Sarasota Bay couldn’t fully account for the dolphins’ behavior. McHugh suggests that more data may be needed to understand these influences. For instance, direct data on dolphin-boat encounters aren’t available for much of the study period, so the researchers relied on indirect indicators — such as number of boats in a given area — to estimate human exposure.

However, the analyses strongly suggested that dolphins learn unhealthy feeding behavior from one another.

“A dolphin had a higher probability of human interactions if its close associates during the past two years did those behaviors,” McHugh said. “It’s possible that some dolphins were driven to food from humans by a lack of prey historically, but once enough animals became conditioned, social learning took over.”

McHugh noted one example of this social learning: “We see the female dolphin Vespa maybe every month, and we see her doing unnatural feeding behavior about twice a year. She’s not necessarily doing it all the time, but she’s taught it to her calves, and they’ve taught it to their grandcalves, and multiple animals in their family have died from human interactions.” 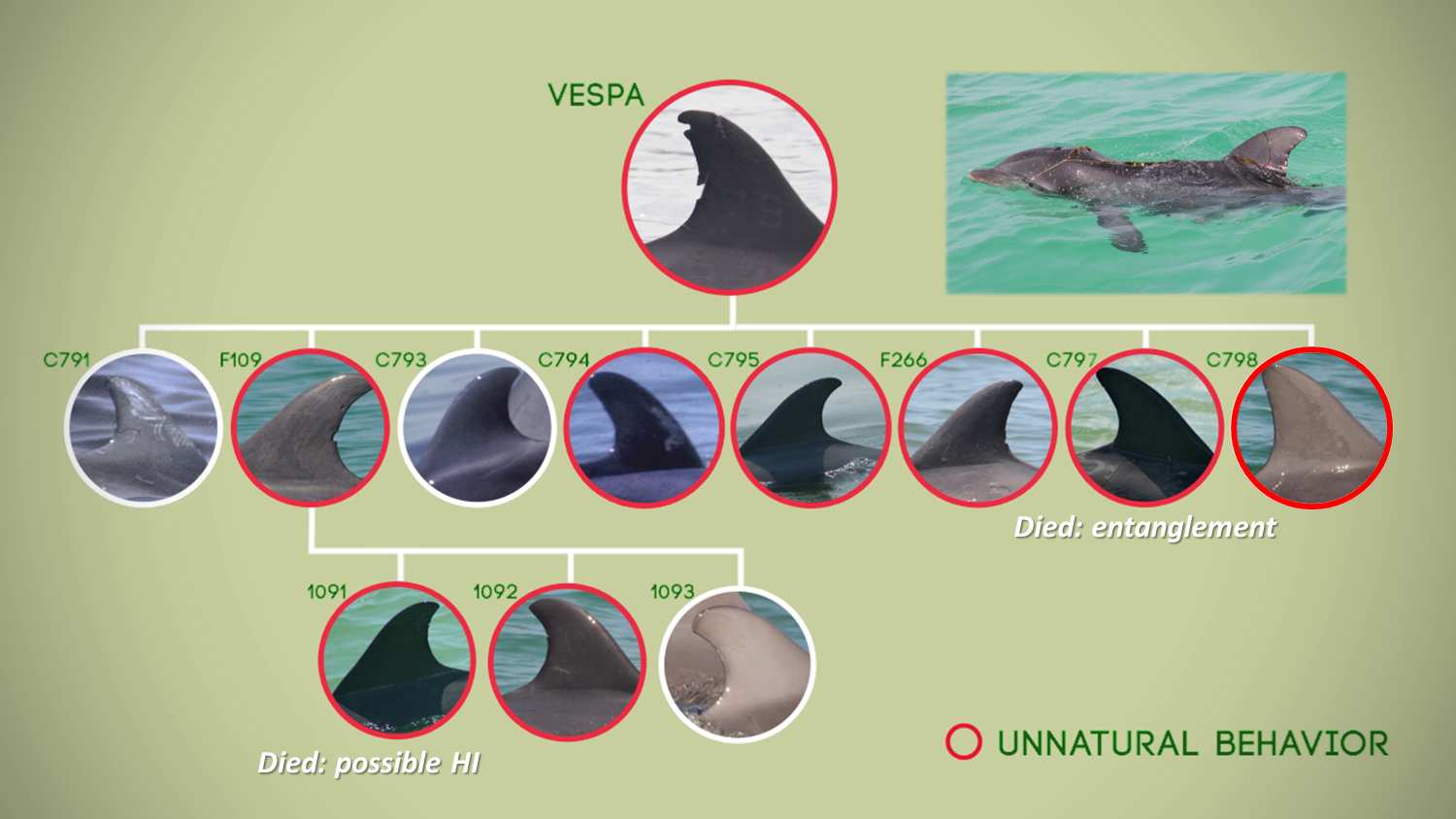 Vespa, a long-term resident bottlenose dolphin of Sarasota Bay, has taught her descendents how to seek human-related food sources. This diagram by the Sarasota Dolphin Research Program shows which of Vespa’s calves and grand calves
have shown unnatural feeding behavior with human-related sources. A couple of Vespa’s descendants died from confirmed or suspected human interaction, such as entanglement in fishing gear. Credit: Sarasota Dolphin Research Program/CZS. Photos taken under NMFS Scientific Research Permit No. 15543.

“About 25-30 percent of dolphins and whales that we respond to at Mote have some sign of human interaction,” Lovewell said. “This new study has put the issue in context and allowed us to work with a great team to illustrate how humans can affect these animals.”

As more data become available, Christiansen suggests investigating more specifically how human-dolphin encounters influence unnatural feeding behavior. “If we know what human-related factors drive conditioning in dolphins, we can focus management actions to reduce these factors, so that conditioning can be prevented in the future.”

For now, McHugh says: “Anything you can do to avoid feeding dolphins, to avoid rewarding risky unnatural behaviors, really does help. They’ll eventually stop if you don’t feed them at all — not even one shrimp.”

Funding for this study was provided by NOAA Fisheries through a partnership with Mississippi-Alabama SeaGrant Consortium. Awarded funds for this study were administered by the Chicago Zoological Society.