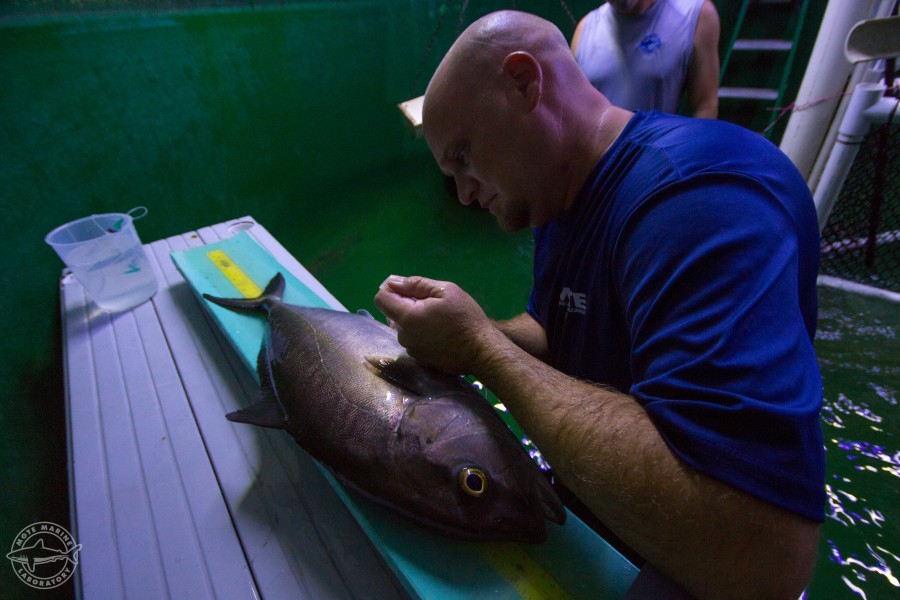 Mote Marine Laboratory scientists have launched a new study on how to farm almaco jack – a fish served as sushi or in cooked dishes in some parts of the world, but never before farmed in one of its major habitats, the Gulf of Mexico.

By studying how to raise and spawn Gulf stocks of almaco jack in sustainable, land-based aquaculture systems, Mote scientists hope to provide essential knowledge to help the aquaculture industry produce healthy, juvenile almaco jack in land-based farms to supply offshore cage farms. This research underscores a new opportunity for Gulf-based aquaculture. In January 2016, the National Oceanic and Atmospheric Administration (NOAA) announced  the Fishery Management Plan for Regulating Offshore Marine Aquaculture in the Gulf of Mexico (Gulf Aquaculture Plan), which will allow as many as 20 offshore aquaculture operations in Gulf waters to be permitted over 10 years.

Almaco jack (Seriola rivoliana) live in tropical, subtropical and sometimes temperate waters around the world, bearing many common names such Kona Kampachi and longfin yellowtail. Almaco jack farmed in recirculating aquaculture are listed as a great sustainable seafood choice by Monterey Bay Aquarium’s Seafood Watch guide, while offshore-farmed almaco jack are dubbed a good alternative. Restaurant-goers might find almaco jack on menus along the Pacific Ocean coastlines or in major U.S. cities, but the species is a rarer treat around the Gulf of Mexico.

“This fish is a perfect candidate for offshore aquaculture growth in the Gulf, because we know it has a strong market and people have cultured it in other places — such as Europe and Hawaii — but the Gulf stock has never been cultured,” said Dr. Kevan Main, Senior Scientist at Mote and co-principal investigator for the almaco jack project. “We are trying to determine what the requirements are for maturation, spawning and hatchery production.”

Normally, Mote scientists must tweak the temperature, lighting and other conditions to help a fish species spawn in MAP’s eco-friendly, recirculating aquaculture systems. Understanding the needs of each fish species can take years.

However, the almaco jack jumped the gun — in a very good way.

“The fish surprised us — they started spawning on their own last week, and they spawned almost every night for more than a week,” Main said. “Something here is working right, so we want to know what conditions triggered this spawn. This also gives us a good opportunity to start sampling earlier than planned. When the fish are spawning, it’s a good time to take gonadal biopsies to identify the males and females. We’ll also tag, weigh and measure the fish.”

Dr. Nicole Rhody, Mote’s co-principal investigator for the project, bent over her microscope Wednesday afternoon, Aug. 23, to examine samples collected from the almaco jack. “We saw that they were spawning — releasing eggs and sperm — but we want to see which individual fish are actually contributing, and which ones aren’t yet. Here I am looking at the oocytes, which will develop into the eggs, and we’ll examine them in more detail using histology to confirm which fish have recently spawned. We’ll also count the sperm and look at their motility and morphology to see if the male fish are able to reproduce successfully.”

Overall, Mote’s study of almaco jack will last two years and focus on: understanding the reproductive cycle in an aquaculture system; developing methods to improve survival and growth for research- and commercial-scale trials of rearing larvae (babies) and fingerlings (juveniles); examining seafood market opportunities; and disseminating results to the scientific community and aquaculture industry.

To date, domesticated fish are few. They include highly popular seafood species such as salmon and tilapia.

At this early stage of the almaco jack project, Mote scientists are focused on surmounting two key challenges: poor-quality spawns and low survival of young fish in hatcheries, along with health challenges that naturally affect these fish in the wild: parasites and bacterial pathogens. Mote is leading the spawning and rearing research, while a collaborating scientist from the University of Florida’s Tropical Aquaculture Lab in Ruskin, Florida, will lead the health and disease research.

Funding for this project is provided by NOAA Sea Grant Aquaculture Research Program and administered by the Florida Sea College Program. 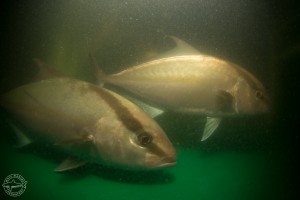 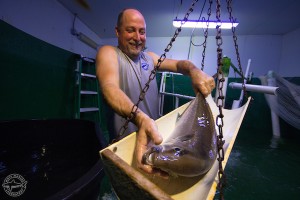 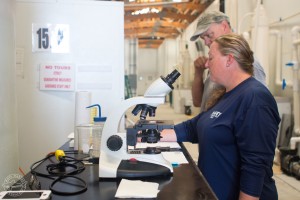