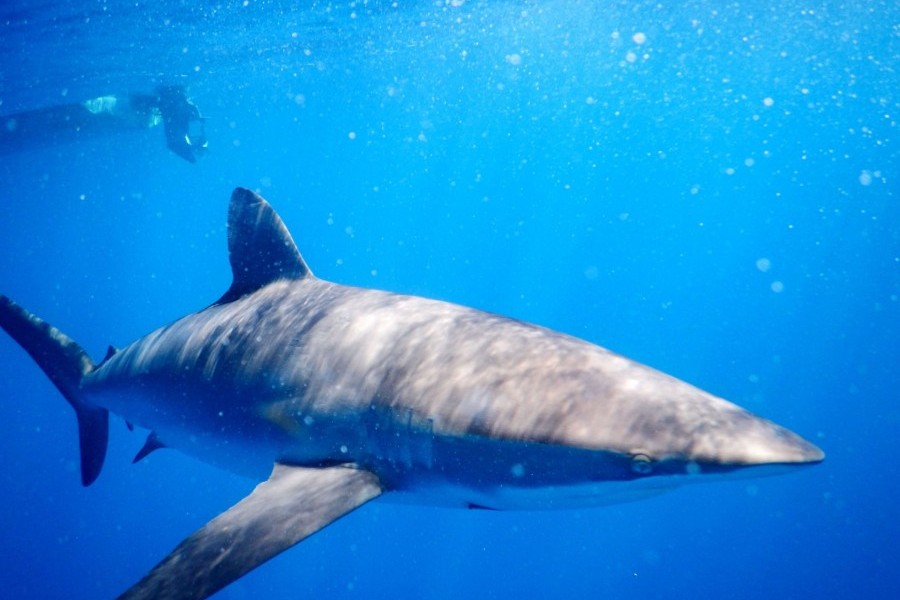 Study partners point out that North Atlantic blue sharks and shortfin mako – the fastest shark in the sea – have on average 76% and 62% of their space use, respectively, occupied by longline fishing  vessels each month, and even internationally protected species such as great white and porbeagle sharks are at risk of bycatch in such fisheries. The study calls attention to the danger of accelerating shark population declines and disappearance of their hotspots, along with opportunities for more sustainable management of fisheries and shark populations internationally.

The study included 150 scientists from 26 countries who combined their knowledge and data from nearly 2,000 satellite-tagged sharks. Co-authors from Mote Marine Laboratory’s Center for Shark Research have tracked white, bull, hammerhead, whale and multiple other shark species with satellite tags over decades of conservation-focused science, some in collaboration with research partner OCEARCH.

Below is a statement from Dr. Robert Hueter, Director of Mote’s Center for Shark Research, who served as a study co-author along with Mote Senior Biologists Jack Morris and John Tyminski. 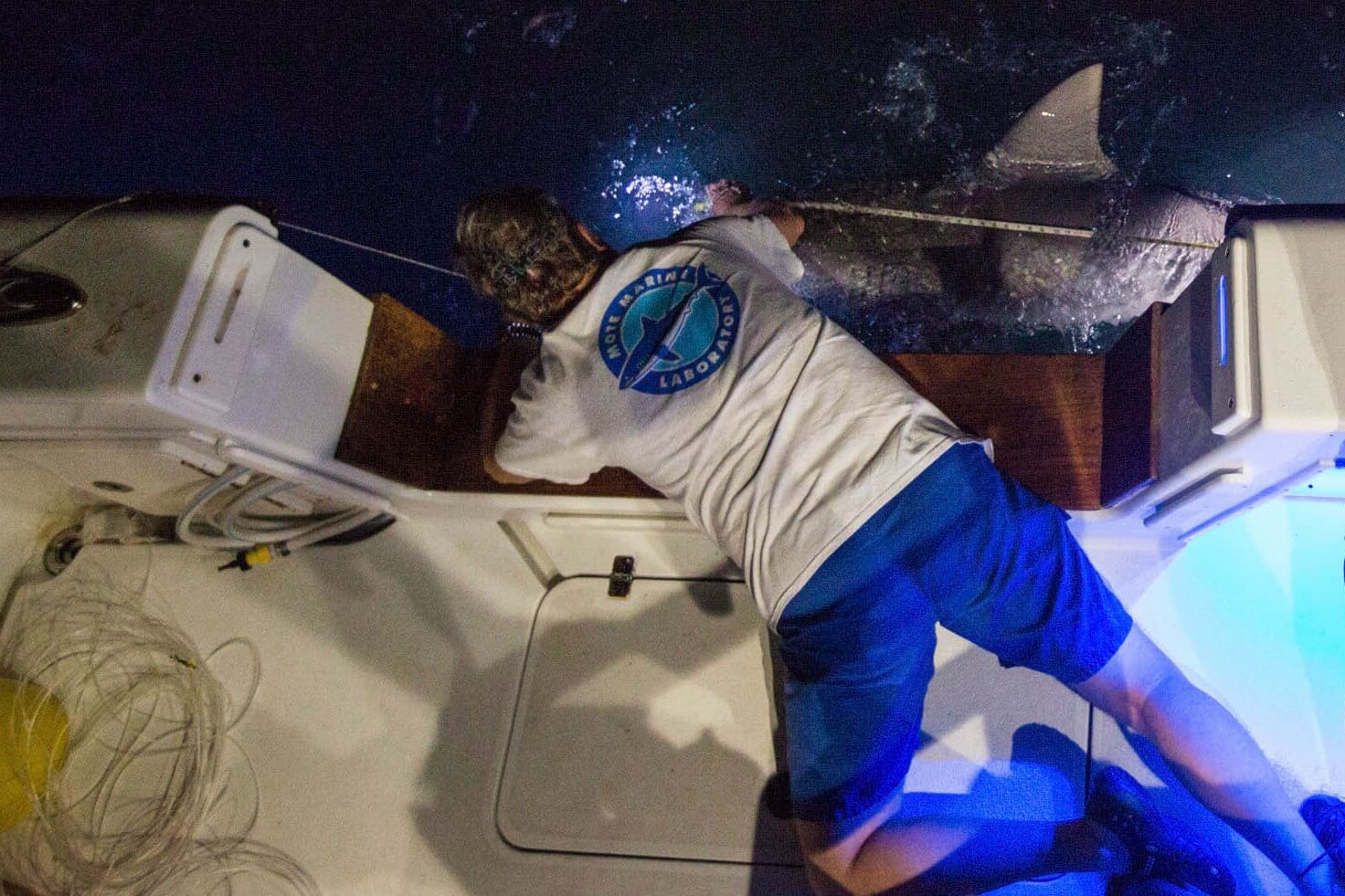 “Sharks are an important part of oceanic fauna and they are sharing a lot of the same areas as the target species of open-water, longline fisheries. It is alarming to see how extensively shark movements overlap with these fisheries; outside United States waters, such fisheries often lack a responsible management approach to address shark bycatch and resulting mortalities. In addition, shark finning — the wasteful and inhumane practice of cutting off a shark’s fins and discarding the carcass at sea — can really take its toll out on the open sea in the absence of conservation measures and enforcement of regulations. Shark finning has been prohibited in U.S. waters since 2000.

“This paper underscores the need for improved regulation and enforcement in international, open-water, longline fisheries, comparable to current management of such fisheries in the United States Exclusive Economic Zone. In the U.S. Atlantic and Gulf of Mexico, open-water longline fishermen must fill out logbooks and carry observers plus electronic monitoring systems on their vessels to record video of their catch and bycatch. They are prohibited to fin sharks and must be licensed to harvest whole sharks of specific species. It’s understandable that fishermen have to follow their target species, and at the same time, we can’t stop sharks from using the same areas. Nonetheless, there are sustainable management options that resource managers, fishers and scientists can work toward together, based on the best available data and the mission to balance the needs of humans and sharks.

“This study also shows the power of scientists collaborating and sharing data openly. We at Mote’s Center for Shark Research were happy to provide any and all data that could contribute to this globally important study.”

Mote Marine Laboratory scientists have studied sharks since the Lab was founded in 1955, and today Mote operates the only Center for Shark Research designated by U.S. Congress.

Read the full press release provided by the Marine Biological Association at this link and pasted below.

Even the remotest parts of the ocean appear to offer highly migratory sharks little refuge from industrialised fishing fleets, a ground-breaking study published in the journal Nature reports

Large sharks inhabiting the open ocean account for over half of all identified shark catch globally in target fisheries or as bycatch. Regional declines in abundance of some populations such as shortfin mako shark – the fastest shark in the sea – have led to widespread calls for catch limits in the High Seas (areas beyond national jurisdiction; ABNJ) where there is currently little or no management for sharks.

But precisely where in the vast expanse of the oceans sharks aggregate and how much fishing takes place in those chosen habitats remains poorly known globally, even though it will be crucial to selecting sites to conserve sharks.

Now, an international team of over 150 scientists from 26 countries have tackled this knowledge gap by collating movement data from nearly 2,000 sharks tracked with satellite transmitter tags. Researchers mapped shark positions and revealed ‘hotspots’ of space use in unprecedented detail. They found multi-species pelagic shark hotspots were mostly located in frontal zones, boundaries in the sea between different water masses that are highly productive and food-rich.

They then calculated how much the hotspots were overlapped by global fleets of large, longline fishing vessels – the type of fishing gearthat catches most pelagic sharks – with each vessel capable of deploying 100 km long lines bearing 1200 baited hooks on a daily basis.

Strikingly, they found 24% of the mean monthly space used by sharks globallyfalls under the footprint of pelagic longline fisheries. For commercially exploited sharks such asNorth Atlantic blue and shortfin makos sharks overlap was much higher, withon average 76% and 62% of their space use, respectively, overlapping withlonglines each month. Even internationally protected species such as great white and porbeagle sharkshad overlap values exceeding 50%.

“Some shark hotspots were exposed to higher than average fishing effort for as much as half the year” said Dr Nuno Queiroz, a lead researcher in the study from the University of Porto in Portugal.

Given the high fishing effort in hotspots of many species for significant portions of the year, and the very few tracked hotspots free from exploitation, the study reveals exposure risk of sharks to fisheries in the high seas is spatially extensive – stretching across entire ocean-scale population ranges for some species.The team’s findings indicate large sharks – some of which are already endangered globally – face a future with limited spatial refuge from industrial longline fishing effort.

The researchers propose that the detailed maps of shark hotspots and exposure to longline fishing effort they have produced canprovide a ‘blueprint’ for use in deciding where to place large-scale marine protected areas (MPAs) aimed at conserving sharks, in addition to the need for strict quotas to reduce catches elsewhere. “Some of the shark hotspots we studied may not be there in aslittle as a few years’ time if management measures are not put in place now to conserve the sharks and the habitats on which they depend” Sims says.

The research is published online in Nature on 24th July 2019.

The analysis was funded in part by the UK Natural Environment Research Council(NERC) and Fundação para a Ciência e a Tecnologia (FCT). Field research was supported by many funders listed at the end of the research paper’s Supplementary Information.

5. A full list of participating institutions, organisations and research group leaders is given here: www.globalsharkmovement.org/people

6. The Global Shark Movement Project (www.globalsharkmovement.org) is a collaborative scientific research project based at the Laboratory of the Marine Biological Association in Plymouth, UK (www.mba.ac.uk), which aims to advance scientific knowledge of shark behaviour, ecology, conservation and fisheries science that can be used to inform improved management of threatened sharks and ocean biodiversity.

Tens of millions of pelagic sharks are harvested each year by high seas fisheries but with little or no management for the majority of species. Sharks are particularly susceptible to the effects of human exploitation due to slow growth rates, late age at maturity and low fecundity, traits making them comparable to marine mammals in terms of vulnerability. Global data on pelagic shark habitat hotspots, spatial patterns of vulnerability in relation to fisheries, and how sharks respond to changing environment are lacking, precluding understanding where in the global ocean conservation needs to be focused. GSMP aims toclose this knowledge gap.

7. The Global Fishing Watch (www.globalfishingwatch.org) and Tagging of Pacific Predators(www.gtopp.org) programs kindly made data freely available in support of this research.
The Marine Biological Association (MBA) is a professional body for marine scientists with some 1,700 members world-wide. Since 1884 the MBA has established itself as a leading marine biological research organization contributing to the work of several Nobel Laureates and over 170 Fellows of the Royal Society. In 2013, the MBA was awarded a Royal Charter in recognition of its long and eminent history and its status within the field of marine biology. The award strengthens the Association’s role in promoting marine biology as a discipline and in representing the interests of the marine biological community.The Association is based at its world-class marine research laboratory in Plymouth.www.mba.ac.ukTwitter:@thembauk