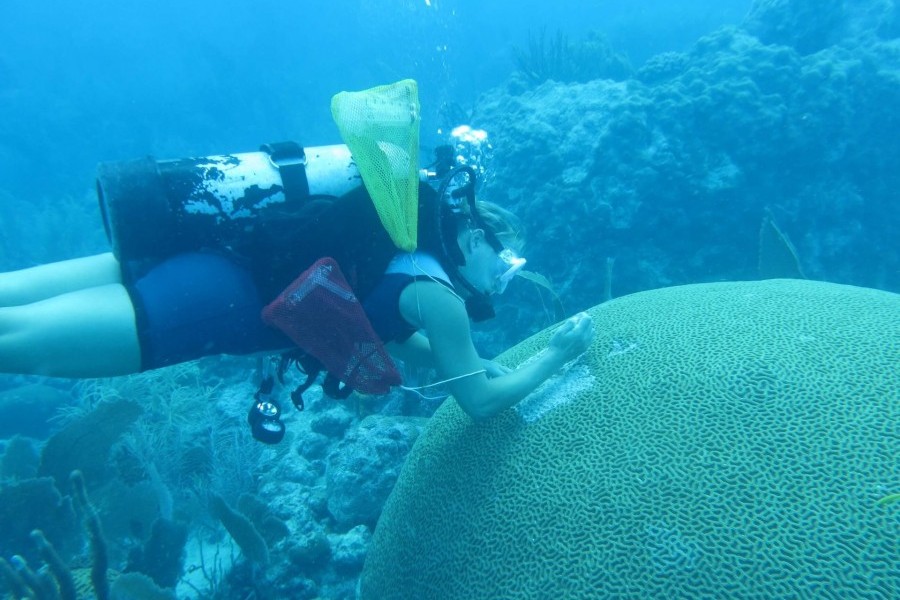 As our communities scramble to cope with COVID-19, ocean scientists are working with similar fervor to help ecosystems that depend upon us—coral reefs, the “rainforests of the sea”—fight their own disease battle. This month, a team of scientists led by Mote Marine Laboratory’s Dr. Erinn Muller published the largest-scale, peer-reviewed epidemiological study to date on the unprecedented and deadly outbreak of stony coral tissue loss disease (SCTLD) across multiple years throughout Florida’s Coral Reef.

Scientists already knew that SCTLD has spread like wildfire through Florida’s Coral Reef since 2014 and reached several Caribbean sites recently, causing major mortality in multiple species of reef-building corals. The unknown pathogen(s) are suspected to be bacterial, waterborne and spread contagiously.

This new, “big-picture” study made sobering new discoveries while helping validate results of other, smaller-scale projects to date. The study showed that SCTLD: can form hotspots of more than 140 kilometers (87 miles) at once; is more prevalent on deeper reefs with more diverse coral species; spreads at an unfortunately persistent pace regardless of changing temperature and nutrients; and—as suspected—appears to be spread contagiously by a novel pathogen or group of pathogens. The latter finding, while not unexpected, provides another great reason for divers to follow best practices to avoid spreading SCTLD.

The study also raises intriguing possibilities. For example, it suggests that bottom-water currents and sediments could play bigger roles in the disease spread than previously realized. In addition, the study reports that a hotspot of what may have been SCTLD occurred off Palm Beach and Broward counties in 2014. However, the study found no cases recorded off of Virginia Key in Miami-Dade County, where the disease was previously reported as originating, suggesting further research into the location of origination of the outbreak is warranted.

Studying the disease is essential for saving a threatened natural treasure. Florida’s Coral Reef provides more than $8 billion economic impact, attracting visitors, protecting coastlines from major storms and supporting diverse life including fisheries. However, Florida’s Coral Reef has lost all but 2% of its living coral cover in recent decades and is struggling to survive amid the growing pressures of disease, climate change impacts (increasing water temperature and ocean acidification), pollution and other serious challenges. SCTLD is one of the most urgent and devastating challenges for brain, maze, boulder, star, pillar and other slow-growing corals that form the very foundations of Florida’s Coral Reef.

“This is the first publication providing a perspective of stony coral tissue loss disease over the entire Florida Reef Tract on a large-scale and multi-year timescale,” said the study’s first author, Dr. Erinn Muller, Science Director of Mote’s IC2R3.

Co-authors of this publication combined and analyzed seven data sets collected from May 2014 to December 2017 throughout Florida’s Coral Reef (also known as the Florida Reef Tract). They used multiple statistical methods to characterize disease hotspots, rates of spread, signs of contagion, and the potential environmental and ecological influences that might affect the disease.

“The scale of the disease hotspots could be up to 140 kilometers in diameter, which is big if you think about coral reefs and how patchy they can be,” Muller said. “We found that it was spreading at about 100 meters per day to the north and about 92 meters per day to the south. It’s important to recognize that the disease is spreading at such a fast rate and impacting large areas for a long periods, and so is the fact that the disease moved faster to the north than to the south.”

The disease moved at speeds consistent with bottom-water currents and the sediments they carry—suggesting that scientists should further investigate these potential “vehicles.” Muller and colleagues are doing just that. “I’m collaborating with hydrodynamic modelers within the University of Louvain in Belgium and the National Oceanic and Atmospheric Administration to couple the spatial disease data we just published with hydrodynamic information.” (Hydrodynamics includes studying water movement, and in general, forces acting on liquids.)

The study also revealed some troublingly unique features of SCTLD. “In most coral diseases, you see an increase in activity, prevalence and incidence when temperature is higher; uniquely with stony coral tissue loss disease, there doesn’t seem to be this association,” Muller said. Regardless of temperature and season, “it’s continually active and the corals aren’t getting a break.”

SCTLD affected at least 19 coral species during this study, some more frequently or severely than others, consistent with the case definition of the disease maintained by agency partners. It is known to affect at least 24 species of hard coral total.

The study found that species-diverse and deep-water reefs faced a greater risk of SCTLD than less diverse, shallow reefs. This is concerning, because it could be a sign that diseases like SCTLD will make reefs less diverse—reducing one of their primary strengths.

“Coral reefs are the most biologically diverse ecosystems in the ocean,” Muller said. “The impacts of the stony coral tissue loss disease can be, and are, quite devastating.”

While these results are hard to hear, she said, “I think they could give other countries an idea of what they should plan for as it invades new locations.”

This study also provides a critical reminder that science-based reef restoration is necessary for the recovery and survival of Florida’s Coral Reef. Mote scientist are actively working to conduct and optimize restoration using diverse genetic varieties of coral, prioritizing native genetic varieties that can resist SCTLD and other stressors.

While this research effort faces new logistical hurdles due to significant societal impacts of COVID-19, Mote’s mission can and must move forward for the future of Florida’s Coral Reef and the oceans as a whole.