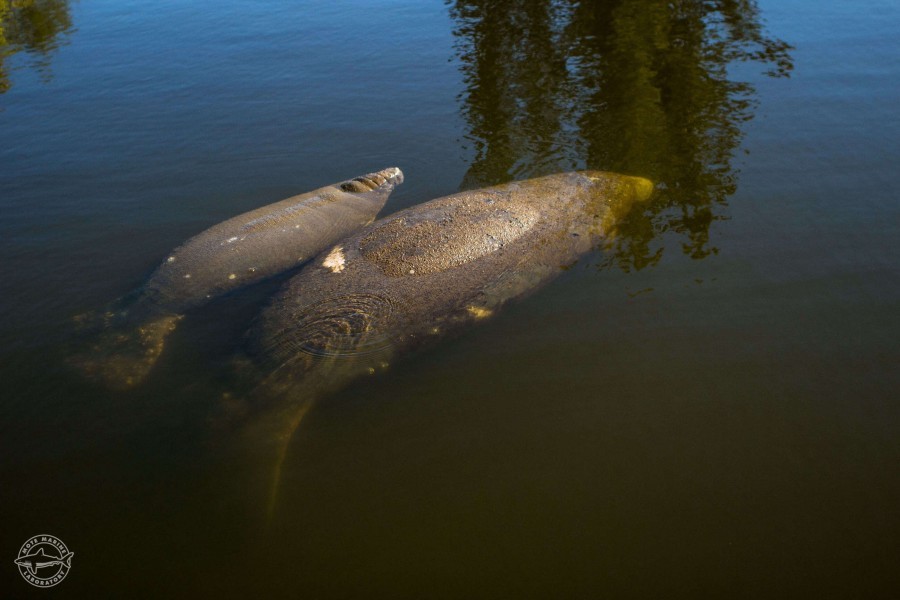 Mote Marine Laboratory's Manatee Research Program studies and monitors Florida manatees to inform management and conservation. In the process, Mote scientists end up answering some fascinating and funny questions from the public. In honor of Manatee Awarenss Month, November, here are some of the funniest questions and misconceptions the team has heard, with answers that we hope will help everyone learn some new facts about these iconic marine mammals.

Do manatees have eyes on their tails?

Nope! While some manatees may drift backward in flowing water, they normally swim forward and their eyes are right where you’d expect—in their heads.

Are they ugly dolphins?

We think manatees are quite handsome, but  no, they’re not dolphins! They belong to a different scientific group, the order Sirenia.

When a boat comes, manatees push their babies under the dock for protection, and that’s why they have barnacles on their backs.

We haven’t seen manatees pushing their calves under docks. Manatees accumulate barnacles and other marine life on their skin just from being in the environment. But they do get struck by boats sometimes, and you can help protect them by respecting slow speed zone signs and watching for manatees in your path.

They are sea slugs.

Not even close! They are mammals.

Manatees are not native to Florida.  They were…

I found a baby manatee in distress (it was a sea cucumber).

This one gave us a good laugh. But it’s still a great idea to call trained wildlife rescuers if you think you see a marine mammal or sea turtle in distress — even if you’re not sure exactly what you’re seeing.

Are they beluga whales?  Why aren’t they white?

Are manatees called sea cows because they are corralled to keep the seagrass in check?

Nope! While “sea cow” does reference that manatees are grazing herbivores, and while they do feed on seagrass, nobody corrals manatees to encourage them to graze a certain area. They’re wild animals, and no one should remove seagrass—lots of animals depend on it.